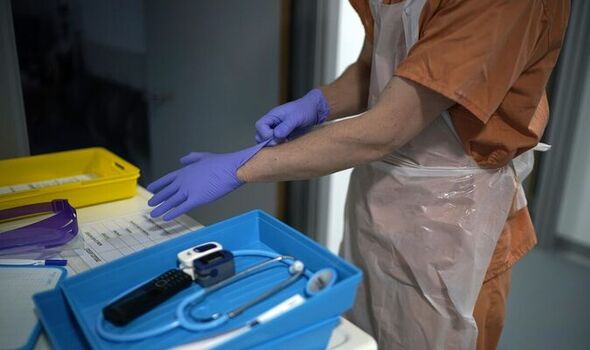 The NHS has published data that show which GPs are failing to see patients face to face as doctors face criticism for over-the-phone and Zoom appointments. Data released by NHS England on Thursday reveals the surgeries with the lowest record of in-person appointments. Doctors’ surgeries have been facing a backlash over conducting remote appointments and lengthy waiting times which has been attributed to helping fuel an A&E crisis as many people with non-urgent care issues seek help in emergency rooms.

The data was published on the NHS Digital website with the aim to give information on wait times and in-person appointments for participating GP surgeries in England.

Health and social care secretary Steve Barclay Tweeted: “For the first time ever, patients will have more choice over their GP practice informed by waiting times.

“We promised to prioritise patients and improve access and that is exactly what this data will do.”

The data revealed some key facts: 36.1million appointments were estimated to have happened in October 2022, of which 4million were Covid vaccinations delivered by a practice/PCN whilst 71.3 percent of all these appointments were carried out face to face.

The latest data on the NHS backlog published by the British Medical Association shows that more patients than ever are waiting to get appointments. A record high 7.1million people are waiting for treatment with 2.87million waiting more than 18 weeks for treatment. That number keeps on creeping up month to month.

Waiting times vary from practice to practice as does the number of in-patient appointments. For the first time, NHS users will have the power to search a database that shows them which practices have the highest waiting times.

This data Barclay promised, will be invaluable to NHS users who will have the opportunity to take control of their medical care. However, criticism came from GP leaders who said the data would create “league tables” without solving the root cause for some practices to perform badly.

Practices have introduced a telephone triage with many patients in order to relieve the stress on doctors whose reserves should be saved for people who need to be physically examined. Telephone appointments are meant to filter the more urgent appointments from those that can be resolved on the phone.

Last month the Care Quality Commission warned that more than 10 patients who could not get a GP appointment end up at A&E and just 11 percent call 111, a service which has been promoted as a resource for people to learn about their ailment and whether they need medical care or can treat themselves at home.

According to pre-pandemic figures from the NHS 111 prevented more than 12million unnecessary A&E visits. However, Health Watch, who conducted a survey on 111 usages in 2021 found that some respondents who were directed by 111 to A&E had been given the wrong advice and were subsequently turned away by care workers who told them their ailment was not urgent.

The public will be encouraged to revert to NHS 111 in order to raise awareness of the service.

Prof Kamila Hawthorne, the chairman of the Royal College of GPs, told GP online family doctors had “serious concerns” about attempts to compare practices, “as with general practice you’re rarely comparing like with like”.

“What works in one practice may not in another, so they will tailor their services to their patient population,” she said.

She continued: “We worry that this data will be used to create arbitrary ‘league tables’ that don’t account for different patient demographics and ways of working and those that appear at the bottom will face undue criticism at a time when the profession is already demoralised and working under intense pressures.

“We also understand that the data published on Thursday will be experimental, so it’s unclear how comprehensive or useful it will be.”