‘My little boy was dangling over the edge’ 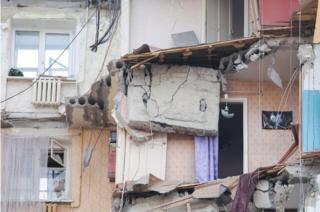 It was New Year’s Eve and families were fast asleep when an explosion tore through their apartment block, bringing down 10 storeys in a matter of seconds.

“The roar woke me up and my husband shouted,” said Yelena Kruglyakova, asleep with her husband and three-year-old son in a flat on the fourth floor.

“I rushed to the sofa-bed. It was broken and part of the floor had collapsed into the flat below. My little boy was dangling over the edge, clinging on to the bedsheet.”

Somehow the boy clawed his way up the sheet to safety and the family survived.

Thirty-nine people did not, when the block came crashing down in an apparent gas explosion shortly after 06:00 in Magnitogorsk, a bleak industrial city in Russia’s Urals region.

The temperature was below -20C as shivering, dazed survivors picked their way out of the rubble in their night clothes.

Instead of celebrating the New Year, the city was plunged into mourning.

Even without such disasters life is tough in Magnitogorsk, 1,695km (1,053 miles) east of Moscow. In the 1930s Soviet dictator Joseph Stalin made it a steel production centre, closed to foreigners.

For days the number of casualties climbed as rescuers searched the collapsed building for the missing.

Anxious relatives had to endure a painfully long wait.

It was dangerous, painstaking work as bodies were brought out of the mountain of rubble. 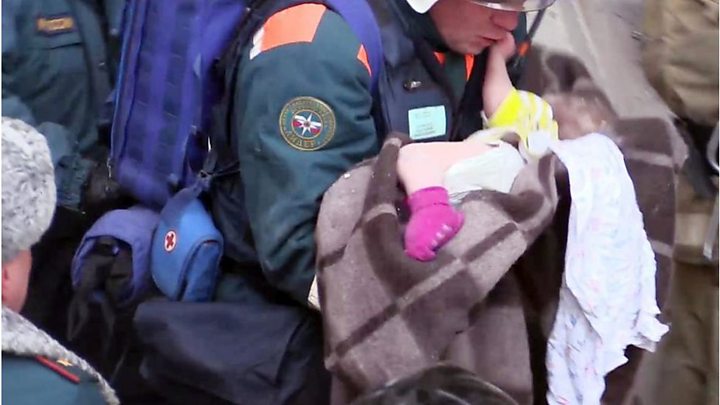 Miraculously an 11-month-old boy, critically ill, was found after more than 30 hours in the freezing cold. Ivan is now recovering in intensive care in a Moscow hospital.

But tragically just a handful of others were pulled out alive of a block that had been home to 120 people.

The official list of fatalities only appeared on 3 January.

Officials quickly ruled out foul play, blaming the explosion on a gas leak. No traces of explosive were found.

Who are the victims?

Six young children were among the 39 dead, including three from one family from Tajikistan.

Only the father survived: Shukhrat Ulfatov, 26, was severely hurt and is now reported to be in a coma.

He had been buried in the rubble for about eight hours.

His 24-year-old wife Rajabmo died along with three-year-old Mukhamad, Fotima who was four, and Akhmat, aged six.

Twenty-one of the victims were women.

Another young family was also wiped out: Anastasia and Igor Kramarenko, both aged 31, and their 18-month-old daughter, Milana.

Viktor and Tatyana Antilov, in their 30s, died with their 19-month-old daughter Ulyana.

The sixth young child who died was Danil Tinibayev, aged four and a half.

Two brothers in their 30s – Denis and Dmitry Kremlyov – died along with their parents Yelena and Andrei.

A rescue team called Legion-SPAS published the victims’ birthdates on VKontakte, the Russian version of Facebook.

Olga Skvortsova, a 43-year-old music teacher, died in the flat of a friend, who had left for work just before the blast happened.

Another friend of Olga’s, quoted by the daily Komsomolskaya Pravda, remembered her as a cheerful, hard-working and self-reliant person. Now Olga’s teenage daughter Katya has to cope with funeral arrangements.

Traumatised survivors are being sheltered at a local school and have received warm clothes.

The local Chelyabinsk region is giving the families of those killed 1m-rouble (£11,600; $14,700) assistance payments.

As the search for survivors came to an end on Thursday there was some good news from the disaster scene. Rescuers found a dog and a cat and brought them to safety.

Gas explosions are quite common in Russia, which struggles with much infrastructure dating from the communist era. But this was a cruelly devastating one.

A survivor called Zoya said that the loud bang woke her up, but she thought something had fallen down in her mother’s room, next door.

“Mum said ‘the block has collapsed’. I just thought she was being plagued by childhood memories of the war,” Zoya said.

“I even started arguing with her, I thought it could be a firecracker. So I went back to sleep, but then acquaintances phoned us and said our block of flats had collapsed,” she said.

Reporting by Oksana Chizh in Magnitogorsk and additional material from Laurence Peter.