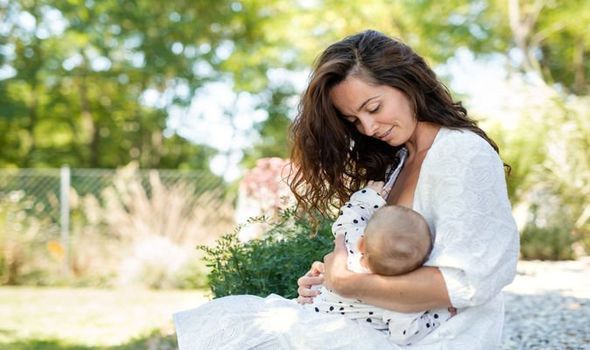 The woman has been living with her husband in her home for five years, and a new couple named Anna and Paul moved in next door when she was two months pregnant. She claimed they had issues early on, after they spotted her sunbathing in her private garden from the second floor of their home.

They initially complained that seeing her pregnant made them “uncomfortable” and later revealed that they have fertility issues.

Two months later, her son was born, and the couple complained again that they could “see him” from their balcony.

The woman wrote on Reddit: “Today, my husband and I were grilling some meat in the backyard. The baby was hungry so I started to breastfeed.

“When I looked at their house, Anna was on the balcony, she went in and a few minutes later Paul was at our door again. I gave my son to my husband, and I answered the door.

“Paul went off on me for breastfeeding in public (my fenced yard) and being inconsiderate.

“When he finished I told him to leave us alone, don’t knock on my door again, and if his wife is so upset over seeing a baby she needs therapy and not him harassing my family.

“At the time I felt justified, but I was venting with my mum and she told me I was wrong, and I couldn’t understand because I never suffered from infertility and I need to apologise.”

She asked Reddit users what they thought about the situation, and many argued that the neighbours were acting badly.

One wrote: “This is not your problem. It sucks for them but are you really going to stop being a mum at certain viewpoints because they can’t have a baby? She needs to stop looking at your home.”

Another added: “I will say her behaviour is really concerning and just reading about how she watches you made me uncomfortable. I would keep my guard up around her because she doesn’t seem like a stable person.”

A third commented: “This is entirely a them problem, not a you problem.”