She was once considered a shining Tory star, whose meteoric rise to among some of the top jobs in government was almost unprecedented.

But just over one month into the role of Prime Minister, Liz Truss has triggered an economic crisis, issued screeching u-turns on the policies she was voted into office on and has become so unpopular, a snap general election would leave the Conservative party all but wiped out.

Now, announcing her resignation in a brief speech, Truss – who very much marketed herself as Thatcher 2.0 to Tory party members in the leadership vote – has followed in her idol’s footsteps and been ousted by her own party. Truss’s short tenure as leader is perhaps only set to be remembered as one of British politics’s biggest mistakes.

Truss was not always so reviled in politics. Having become a Conservative MP in 2010 for South West Norfolk, she was instantly spotted as an up-and-coming star by former Prime Minister David Cameron, boasting roles Under Secretary of State for Education and Childcare as well as Secretary of State for Environment, Food and Rural Affairs.

It was in this second role where Truss became more of a household name, but not necessarily for her natural aptitude for politics.

The 2014 Conservative Party Conference saw her become instant meme fodder for an impassioned yet simultaneously stilted speech about ‘pork markets’ and ‘cheese imports’.

Some may have found becoming a laughing stock for your views of food imports embarrassing, but according to those close to her, Truss loved viral fame.  As one of the more social media savvy members of cabinet, regularly posing with celebrities such as Taylor Swift on Instagram or carefully curating snaps for social media, this exposure helped her gain a wider presence that older, more traditional Tories may not have had.

Liz Truss resigns: What happens next?

Liz Truss has stepped down as Conservative Party leader and UK Prime Minister after just 44 days. So what happens next?

– Liz Truss’ speech in full after resigning as Prime Minister

– Will the new Prime Minister be elected by the public?

– Boris Johnson and Rishi Sunak to go head to head

– Pound rises against the dollar after Liz Truss resigns

As well as being ostentatious about her day-to-day life and work, Truss was also vocal about her Conservative views (believing in low taxes, low business regulation and not much state intervention). Seen as a ‘true Blue Tory’, it allowed her to appeal to Conservative Party members, who were responsible for voting her into power. 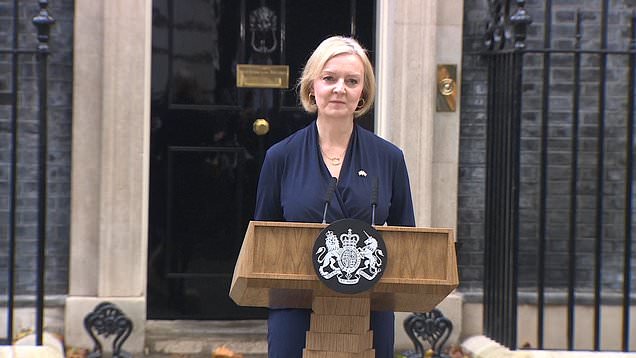 ‘Liz Truss cannot be in any way severed from the ideology she represents,’ political commentator Emma Burnell tells Metro.co.uk. ‘She’s become the absolute pet for free market think tanks such as the Institute of Economic Affairs and the Adam Smith Institute, and their backing gave her some clout.’

Burnell adds that Truss’s rise to power comes from her loyalty to Boris Johnson, who chose his cabinet based on that rather than nurturing talented junior ministers.

‘They didn’t do enough renewal within government,’ she argues. ‘They became very ideologically straight-jacketed. All of the people who might have been seen as quite sensible got kicked out or squashed down post-Brexit. There is a much narrower field to choose from.

‘Anyone looks like a professional next to Jacob Rees Mogg and Nadine Dorries. Of course Truss rose above them.’

Truss was favoured by Johnson after her staunch support for him in the 2019 leadership contest. She was the first cabinet leader to back him publicly after Theresa May’s resignation from her post.

Johnson repaid the then chief Secretary of the Treasury when he assumed the role of Prime Minister by giving Truss the cabinet role of Trade Secretary, before another government reshuffle where she replaced Dominic Raab as Foreign Secretary.

It’s a position that can be tricky to master – Johnson himself rather famously made a hash of it in 2016 where he failed to release Nazanin Zaghari-Ratcliffe, who was imprisoned in Iran.

However, Truss used the post to her advantage – very publicly lauding her successful (if rather small) trade deals. It also allowed her to keep her nose clean during the coronavirus pandemic, as she was not directly involved in the financial, social or health measures being set by Johnson, Rishi Sunak or Matt Hancock.

‘Truss used her role as Foreign Secretary very cleverly,’ Burnell explains. ‘She would go about signing anything that called itself a trade deal, no matter how awful It was. In the long term, has she been an exceptional foreign secretary? She won’t be remembered as such. But she was better than what had come before and she’s very, very good at promotion.’

It was through her constant channeling of Thatcher, as well as her weekly champagne meetings (known in Westminster as ‘Fizz with Liz’) that Truss used to promote herself during her leadership campaign.

Her policies that saw her beat rival Rishi Sunak, and achieve 57.4% of the vote of Conservative Party members, focused on low tax for high earners, and low regulation for businesses to encourage growth and make the UK seem more appealing to investors. She also promised to help struggling families throughout the cost of living crisis by freezing energy bills at £2,500 for 18 months.

One of Truss’s more memorable soundbites from her tenure is her plan to ‘grow the pie’, insisting her policies would encourage high growth and a booming economy for British people.

‘So called “Trussonomics” which is based on an explicitly right-wing libertarian agenda of a smaller state and reduced taxation, is a form of neoliberalism,’ Associate Professor Steven McCabe, political economist at Birmingham City University explains.

‘Dynamic enterprise is explicitly encouraged by the prospect of lower taxes so that capital is attracted to the UK. Equally crucial is entrepreneurs are allowed to work with fewer regulations and vastly reduced tax, so additional wealth created will ‘trickle down’ to those on lower incomes.’

The 45% additional rate of income tax was to be abolished, meaning some of the UK’s top earners had a substantial cash injection handed to them by the Tories.

The cap on bankers’ bonuses, originally implemented after the 2008 financial crash, was also to be reversed.

The new ‘Trussenomics’ had an immediate, negative impact on the economy, seeing pound sterling fall to all-new lows against the dollar. Mortgage rates rose, and the Bank of England was forced to step in to halt a run on pension funds.

The economic turmoil was due to Truss and Kwarteng’s plan announcing £45 billion of tax cuts, but not saying how these tax cuts were going to be funded.

Keir Starmer may be very boring… but my God don’t we want a bit of boring right now?

‘Governments can usually borrow money quite cheaply, but they only really do so for what’s called capital spending – so spending on a ‘thing’ – a hospital, a road, a building project – a thing that would be an asset that they then own, a thing that has a lifespan.

‘That then raises the rate for everything, including mortgages.’

Things got so bad for the economy, banks were forced to pull mortgage offers as interest rates are changing rapidly – one first-time buyer claimed a mortgage lender upped an offer from 4.5% to 10.5% after Kwarteng’s announcement.

‘So called ‘trickle-down’ economics may have its advocates but as the last few weeks have demonstrated, it’s at the extreme end of the orthodoxy spectrum and seen by international monetary markets as being extremely risky,’ McCabe explains. ‘Trussonomics produces benefit for the rich and, in particular, hedge-fund investors who, as well as making money having ‘shorted’ the pound – effectively gaining from our collective misfortune – were backers of Truss.’

Despite vowing to stick by her chancellor, with Kwarteng also saying he ‘wasn’t leaving his post’, he was sacked from his position after just 38 days in office.

He was replaced by Jeremy Hunt, who almost immediately reversed many of Kwarteng’s original announcements in his ‘mini-budget’ – but the damage it caused still hangs over millions, who will be left wondering how they will pay their higher mortgage prices.

While there were already calls for Truss to resign after numerous screeching u-turns – seeing her popularity tank to record lows for a Prime Minister – things worsened after the resignation of her Home Secretary, Suella Braverman.

Braverman, who also ran for Party leader against Truss and had appealed to the more right-wing factions of Conservatives, claimed she made an ‘honest mistake’ after breaching the ministerial code – using a personal email address to share confidential information.

Her resignation letter was considered to be a parting shot at Truss, writing: ‘It is obvious to everyone that we are going through a tumultuous time. I have concerns about the direction of this government’.

However, it was what came later on 19 October which signalled the kiss of death of Truss’s premiership.

Having to vote on a motion triggered by Labour about banning fracking, it was reported that Jacon Rees Mogg and Therese Coffey ‘manhandled’ Tory MPs to vote with the government, with the motion now being considered a test of confidence in Truss.

It was then claimed the Tory Chief Whip, Wendy Morton, and her deputy, Craig Whittaker, stepped down from their posts.

Whittaker was heard saying: ‘I am f***ing furious and I don’t give a f*** anymore,’ as he left the voting lobby.

While it was announced that both Morton and Whittaker were remaining in their post, a growing number of MPs were calling for Truss to stand down.

Backbencher Charles Walker said the furore around Truss was ‘inexcusable’ and ‘an absolute disgrace.’

But Truss stepping down is too little, too late in salvaging the Conservative Party, says Burnell. ‘The Tories are in a death spiral,’ she explains.

‘Changing the leader won’t change anything as there is such divide in the party now. The next leader will just face calls for a general election. They have to cling on for 18 horrible months as the Tories gurgle down the drain.’

Contenders to replace her include Penny Mordaunt on a shared bill with Rishi Sunak, Ben Wallace and Theresa May. Boris Johnson is runoured to be standing.

However, the ongoing chaos has made the opposition Labour party more popular than ever.  Reportedly having  36 point lead in the polls, the Conservatives could lose more than 300 seats if a general election was to be held imminently.

Leader Keir Starmer may not have always been popular with the electorate, having received criticism for being too weak on policies, or lacking Johnson’s appeal and natural bombast.

However, the recent success of the Labour Party conference, where Starmer announced a Labour government would implement a publicly owned energy company, has seen voters and corporations alike view them as a ‘government in waiting’.

‘People are seeing Labour has a competent leader and a competent top team that seem to get on. These are basics,’ Burnell says.

‘Keir Starmer may be very boring… but my God don’t we want a bit of boring right now?’