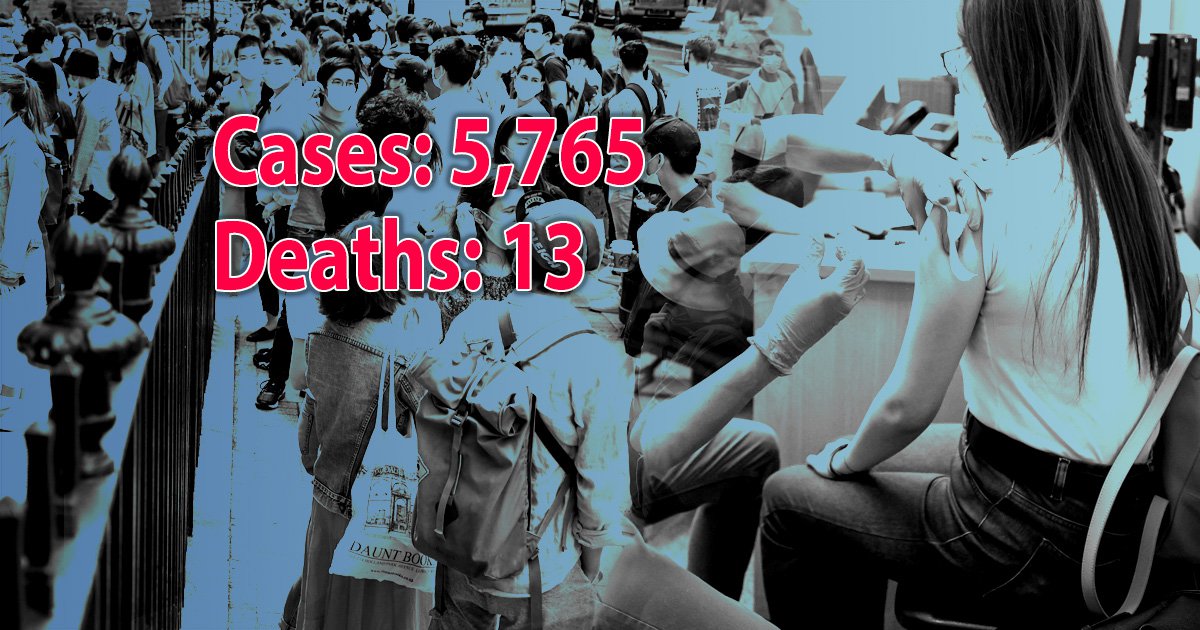 Another 5,765 people have been diagnosed with Covid in the UK, placing further doubt on whether the planned end of lockdown will go ahead.

But the country has passed yet another milestone in its vaccine roll-out with 40,000,000 people now having had at least one jab.

Official figures show there has also been a further 13 deaths, while 154 more people have been admitted to hospital.

It’s after the number of cases rose to their highest level in three months yesterday.

The 6,238 lab-confirmed cases was the highest single-day figure since March 25. The seven day case rate is up nearly 50% compared to last week.

Figures show that in total Covid cases in the UK have risen by 75% since late March, forcing ministers to reconsider whether all restrictions should be scrapped on June 21.

Plans to delay the end of lockdown by two weeks are reportedly being drawn up while further measures including mask-wearing and working from home guidance may remain in place well into the summer.

But, while case rates have been going up, the number of hospitalisations and deaths have remained low, indicating that the vaccine-drive is preventing serious disease.

Chris Hopson, the chief executive of NHS Providers, said the number of people in hospital with the Covid-19 variant first detected in India, also known as the Delta variant, was not increasing ‘very significantly’.

He told BBC Breakfast that many of those in hospital in Bolton – which has the highest number of cases of the Indian variant in England – were younger than in previous waves of the pandemic.

Mr Hopson said on Saturday: ‘The people who came in this time round were actually a lot younger and were a lot less at risk of very serious complication, less at risk of death, and what that means is that they were less demand on critical care.

‘What we think we can start to say now, based on that experience, is that it does look as though the vaccines have broken the chain between catching Covid-19 and potentially being very, very seriously ill and potentially dying.

‘There were very, very few people who have had those double jabs and had been able to have that build-up of protection after those jabs.’