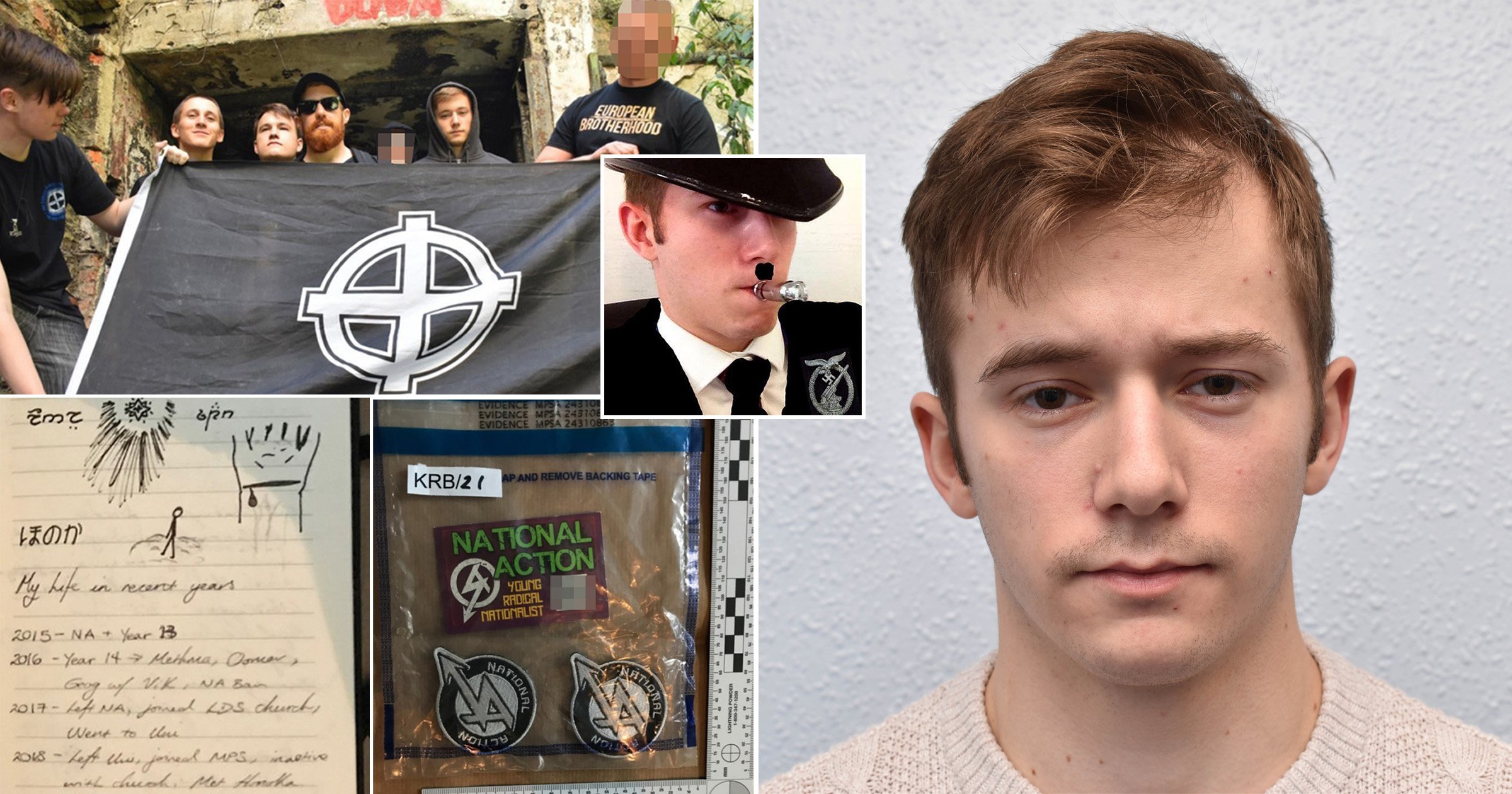 The first British police officer to be convicted of belonging to a neo-Nazi terrorist group has been jailed for four years and four months.

He was also convicted of lying on his application and vetting forms to join the Metropolitan Police and having two terror documents detailing knife combat and making explosive devices.

The sentencing hearing also heard for the first time details of an images offences, which he pleaded guilty to during the trial into his terror group links.

The judge heard that when the home of the then police constable was searched by Met detectives last year, his computer was found to contain a folder of ‘anime cartoons’ of children and young people.

At the time, Hannam was working as an officer among north London communities.

Prosecutor Dan Pawson-Pounds told the court: ‘Although most of the files in this folder did not show any sexual acts, there was a series of twelve drawings of the same hand-drawn girl, who appeared to be eight or nine years old, engaged in acts of intercourse’.

Some of the images showed the child, in a state of distress, being raped by an adult male.

The prosecutor said ‘aggravating features’ in relation to the prohibited images include the young age of the child, the ‘shock and upset’ discernible on her face, and the fact she is wearing a ‘school uniform’.

Hannam, who was suspended from the force during the police investigation, has since been sacked for gross misconduct.

He had been working as a probationary officer for the Met for nearly two years before he was found on a leaked database of users of extreme right-wing forum Iron March.

However, the court heard that he expressed intolerant views before then, writing in May 2014: ‘I’m not racist, I just don’t like people who’s (sic) skin is darker than mine!’

Hannam, who has autism, told jurors he was ‘desperate to impress’ an older NA organiser who gave him free stickers and badges.

The court heard he went on to try and recruit a new member, telling him that most NA supporters agreed the ‘Hitler was right’ slogan was ‘a bit too edgy’ but ‘then again, it is pretty funny and we all know our stance on the big man’.

On December 16 2016, NA was banned after it glorified the murder of Labour MP Jo Cox.

However, between January and July 2017, Hannam continued to meet high-profile figures in the neo-Nazi group.

He applied to join Scotland Yard that summer, just days after spray painting an NA symbol in a storm drain for a promotional video.

He fraudulently denied he had ever been a member of the British National Party ‘or similar organisation’.

When officers searched his bedroom last year, they found Nazi-style posters, notes detailing his membership of NA, as well as NA badges and business cards.

Police also found a USB stick with two documents said to be useful to a terrorist.

One was mass murderer Anders Breivik’s manifesto containing guidance on making chemical weapons and improvised explosive devices, while the second document detailed how to carry out a fatal knife attack.

Hannam denied he had ever been a member of NA before or after it was banned.

He told jurors he had been attracted to fascism at the age of 16 because of its bold artwork, and contacted NA after seeing propaganda online.

‘I was under the impression this was some kind of youth network,’ he said. ‘I have never been stickering with NA, nor have I done banner drops. I stuck to social activities.

‘Most of the time was going to the pub and going for walks. Other times camping or going boxing.’

Following his conviction, it emerged that Hannam’s legal team had asked the judge for an indication of the likely sentence if he pleaded guilty before trial.

Judge Leonard declined but said Hannam, of Edmonton, north London, would face jail, even if he admitted the charges.

The media had been banned from reporting Hannam’s subsequent trial as he had been facing separate unrelated allegations. However, on the day the jury retired to consider verdicts, he pleaded guilty to possessing an indecent image of a child, meaning reporting restrictions could be lifted.

Scotland Yard has said that checks on Hannam’s work revealed no complaints from colleagues or members of the public.

Commenting on his dismissal, Assistant Commissioner Helen Ball said: ‘In behaving as he did, he has without question harmed public confidence in, and the reputation of the MPS, by belonging to an organisation that espouses the views of National Action, which are so wholly an antithesis of the Met’s values and the traditions of British policing.’