Members of the Royal Family have publicly wished Kate and William a happy anniversary on social media. And it appears the Sussexes have also sent a private message to Kate and William, it has been reported by Hello!. Kate, William, Harry and Meghan were once dubbed the “fab Four” but relations have been strained since the Duke and Duchess of Sussex announced their bombshell departure from the Firm, dubbed Megxit.

The Cambridges released two portraits to mark the occasion yesterday that were taken at their home in Kensington Palace earlier this week, with other royals also sharing throwback images of the couple’s wedding day on Instagram.

The Prince of Wales and the Duchess of Cornwall’s official Twitter account posted a congratulatory message as well, complete with a party popper emoji.

The new pictures – taken at Kensington Palace earlier this week by photographer Chris Floyd – capture William and Kate smiling and in a relaxed mood.

The couple are seen cuddling each other in one shot while William stares intently at his beaming wife in the other. 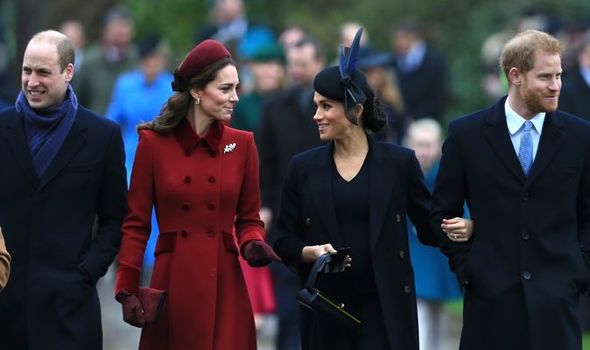 Kate has now spent a decade as a fully signed up member of the royal family, an HRH, a duchess and a future queen.

They are wearing complimentary blue outfits in the anniversary photographs.

William is in a denim shirt that is peeping up beneath a crew neck jumper and navy chinos. Kate is sporting a mid-blue dress that is crossed at the waist and has frills at the cuffs.

Second-in-line to the throne William married his former university flatmate Kate Middleton, who hailed from a wealthy middle-class background, in the central London abbey on April 29 2011 after an eight-year relationship.

Kate, in her role as a senior royal, has focused her charity work on early years, young people’s mental health, the visual arts and promoting the benefits of outdoor life.

During the Covid crisis, the Cambridges have been supporting key workers and frontline NHS staff with video calls and face-to-face engagements when permitted, and promoting the vaccine drive.

They also became joint patrons of NHS Charities Together.

The traditional gift on a 10th wedding anniversary is tin, symbolising strength and durability.