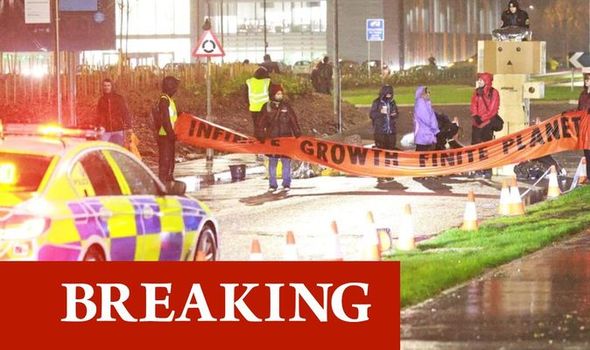 Activists from the eco group descended on Sunbank Lane in Altrincham this morning.

The protest kicked off just before 5am on Black Friday – one of the biggest days of the year for retail.

The road is closed from Wilmslow Road to Ridge Avenue.

Transport for Greater Manchester have advised motorists to use alternative routes.

In a tweet posted just before 5am, TfGM said: “ROAD CLOSED.

“Access to Sunbank Lane is currently closed from the junction of the A538 Wilmslow Road.

“This is due to an ongoing Police Incident.

Extinction Rebellion is also staging protests at other Amazon depots across the country.

Police are also attending a protest at an Amazon warehouse in Tilbury, Essex.

Essex Police tweeted: “We’re dealing with a protest outside an Amazon warehouse in Windrush Road, #Tilbury and engaging with people at the scene to ensure it remains safe.

“However, we expect the disruption to run into the morning rush hours and we’re asking motorists to take some delays into account.”