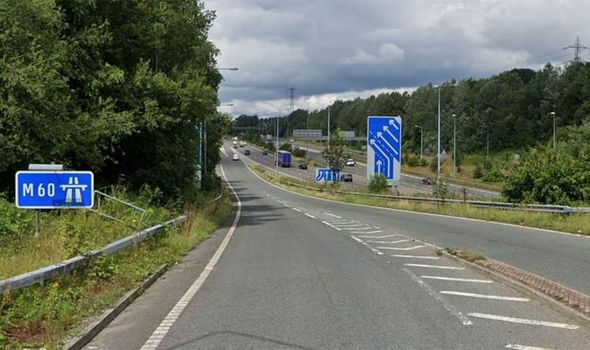 Greater Manchester Police has warned motorists heavy traffic is expected on Sunday afternoon as a “go-slow” protest is to hit the M60. The demonstration is believed to be against the CAZ, which will be the largest scheme of its kind in the country. Opposition to the plans, set to launch in May in Greater Manchester, has ramped up in recent weeks. According to the Inrix traffic monitoring system, vehicles are currently in convoy on the M60 near junction 19 for Middleton and Heaton Park, with one lane of traffic currently closed.

Greater Manchester Police wrote on Twitter and Facebook: “We’re working to minimise disruption on the M60 as a result of a go-slow protest involving around 100 vehicles

“Motorists are advised to find alternative routes whilst officers work with National Highways and speak to those involved to bring the disruption to an end, taking action where necessary.

“We recognise the right to a peaceful protest but protests such as this cause significant disrupt to other road users and in particular, emergency vehicles.”

“We’re working as quickly as possible to resolve the situation and would ask that motorists plan their journeys in advance and avoid the area.”

The CAZ means from May 30 — in a bid to encourage people to drive less-polluting vehicles, including those powered by electric, and more modern petrol and diesels — some people could be charged between £7.50 and £60 daily.

Coaches, vans, buses, taxis, private-hire vehicles and lorries would be charged. Private cars are not included.

The introduction follows calls from the Government for regional authorities to take action after the UK’s highest court, the Supreme Court, ordered ministers in 2015 to tackle air pollution.

Given the widespread concerns over the impact the CAZ as it currently stands could have on businesses, the region’s mayor said the plans will be reviewed.