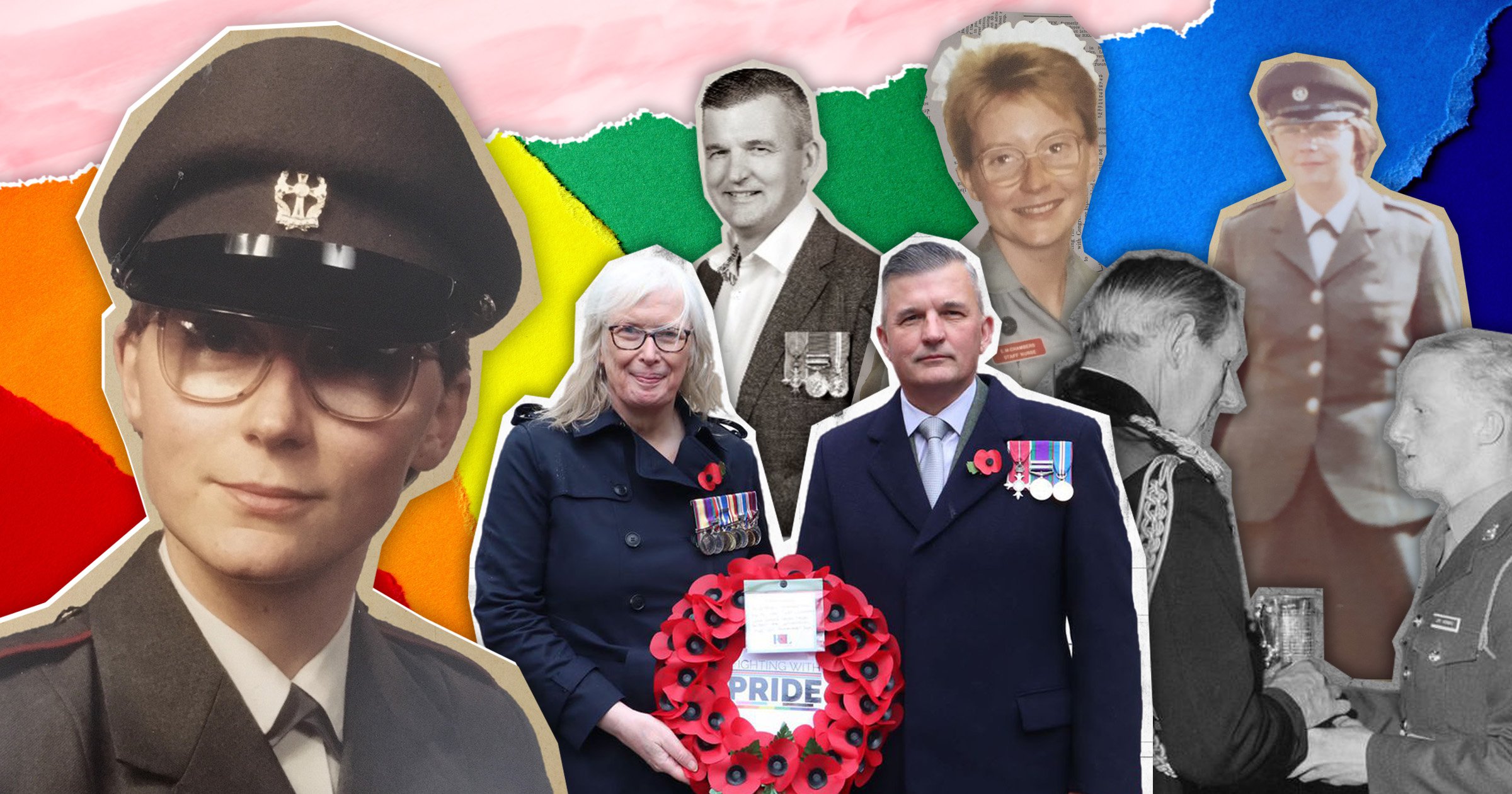 Veterans have spoken out about the harrowing effect of the military’s ‘gay ban’ which led to a wave of arrests and dismissals.

Serving personnel suspected of being gay, lesbian, bisexual or transgender used to be intensely questioned and subjected to distressing medical inspections.

People lost their careers and their pensions, and were ordered to never again use their military rank or wear their uniform.

Some even served time behind bars due to the military criminal offence of being homosexual.

Those affected had their names erased from the ‘Retired List’ of personnel and, in the process of investigations, many were ‘outed’ to family and friends, which meant losing them too.

He had joined the Armed Forces in 1971 to get away from his abusive father.

Tremaine knew he was gay before he signed up, but had been unaware of the military’s ban on homosexuality.

His officers eventually found out his sexual orientation and he was forced to leave.

He said: ‘Being cast out of the Armed Forces, on to the streets with no assistance, accommodation or support, had a catastrophic effect upon my psychological wellbeing, causing vicious damage to my self-worth.

‘Many of us were left completely on our own, unable to return to our families.’

Tremaine has spoken out about his harrowing experience amid an important update from the UK Government.

Today, it was announced that The Rt Hon The Lord Etherton QC will chair an official review into the military ban.

The review was launched in January and, following the appointment of its chair, it will now begin its year-long investigation.

Lord Etherton made history himself when he became the first openly gay judge of the Senior Courts.

Tremaine added: ‘I hope this review can repair the hurt and compensate the loss and that its recommendations are honoured in full.’

Sharon Hudson, a Women’s Royal Army Corps veteran, also experienced first hand as a result of the crackdown on LGBTQ+ people within the Armed Forces.

She had revealed her sexuality after severe bullying from male soldiers and military investigators.

She had gained the title of Lance Corporal by the time she was ordered to leave.

‘Being dismissed for my sexuality severely affected my mental health,’ Sharon said.

‘I lied to my family for 40 years because of the shame I felt.

‘I hope this review rights the wrongs for all those affected by the ban and we can feel proud to have served.’

She had been working in Germany when she was suddenly questioned about her sexuality.

Officers from the military’s Special Investigation Branch ‘investigated’ for five months before ordering Elaine to leave.

She said: ‘This review, if truly independent and conducted in a timely fashion, has opened a door I had thought was firmly shut.

‘And it restores a cautious sense of optimism that at long last, some sort of meaningful restorative justice may be served.’

At the time of the gay ban, many Armed Forces charities wouldn’t help those affected due to their ‘dismissed in disgrace’ status.

Lord Etherton, a crossbench member of the House of Lords, says he will ensure veterans can now share testimonies in a ‘safe environment’ as part of the review.

He added: ‘This will allow me to make measured recommendations as to how the government can meet their commitment to ensure that all veterans’ experiences are understood and valued.’

Campaigners hope the review can lead to better mental health support and possible compensation for the devastation caused.

Fighting With Pride, a charity which supports LGBTQ+ veterans, has welcomed today’s announcement that Lord Etherton will head up the review.

The organisation aims to connect service charities and organisations to those veterans who have been ‘left behind’ as a result of the military ban.

Joint chief executives Caroline Paige and Craig Jones MBE said in a statement: ‘This appointment offers hope to the thousands of LGBT+ veterans whose lives were – and still are – affected by the ban. It has been over 22 years since the ban was lifted.

‘Appointing a chair to the review is an important step, but there is much work to be done to restore trust and to make meaningful reparations.

‘This review must bring hope of a better future for those who live with the consequences of the ban.’

The ban was lifted on 12 January 2000 after years of legal wrangling.

Elaine and fellow veteran Robert Ely – who had both been dismissed from the Armed Forces because of their sexuality – formed campaign group Rank Outsiders in 1991.

They helped campaigned to repeal the ban, and in 1998, took their case to the High Court.

Although initially thrown out, with the support of Stonewall they then took it to the European Court of Human Rights, which ruled in favour of overturning the decision.

By January 2000, the ban was fully lifted and LGBT!+ people were free to serve openly in the Armed Forces.

Twenty-two years on, the Government has begun to make some reparations to honour those whose lives were ripped up as a result of the ‘gay ban’.

Last year the Ministry of Defence announced that veterans can reclaim medals that were confiscated and the Minister for Defence People and Veterans made a personal statement of apology.

But despite Ministers pledging ‘recognition and recompense’ for the thousands affected by years of illegal prohibition, charities and campaigners feel little has been done to address the wider impacts of the ban.

We welcome the launch of todayâs Independent Review into the impact of the pre-2000 LGBT military ban, and the announcement of Rt Hon The Lord Etherton QC as its Chair. pic.twitter.com/qyib2t07Kk

The UK Government’s Minister for Defence People and Veterans Leo Docherty today said: ‘The historic ban was wrong and those who were thrown out of the military purely because of their sexuality suffered and we acknowledge that.

‘This review will help us better understand the impact and I am delighted that the highly eminent Lord Etherton will be chairing it.

‘We look forward to seeing the outcome of the review and reviewing the recommendations.’

Just this week, Olympic legend Dame Kelly Holmes came out as gay at the age of 52.

The sporting icon said she realised she was gay when she was a soldier in the Women’s Royal Army Corps in 1988 at the age of 17, and kissed a female comrade.

She kept that part of herself hidden, however, out of fear of being prosecuted due to the military ban.

This year marks 50 years of Pride, so it seems only fitting that Metro.co.uk goes above and beyond in our ongoing LGBTQ+ support, through a wealth of content that not only celebrates all things Pride, but also share stories, take time to reflect and raises awareness for the community this Pride Month.

And we’ve got some great names on board to help us, too. From a list of famous guest editors taking over the site for a week that includes Rob Rinder, Nicola Adams, Peter Tatchell, Kimberly Hart-Simpson, John Whaite, Anna Richardson and Dr Ranj, we’ll also have the likes Sir Ian McKellen and Drag Race stars The Vivienne, Lawrence Chaney and Tia Kofi offering their insights.

During Pride Month, which runs from 1 – 30 June, Metro.co.uk will also be supporting Kyiv Pride, a Ukrainian charity forced to work harder than ever to protect the rights of the LGBTQ+ community during times of conflict, and youth homelessness charity AKT. To find out more about their work, and what you can do to support them, click here.