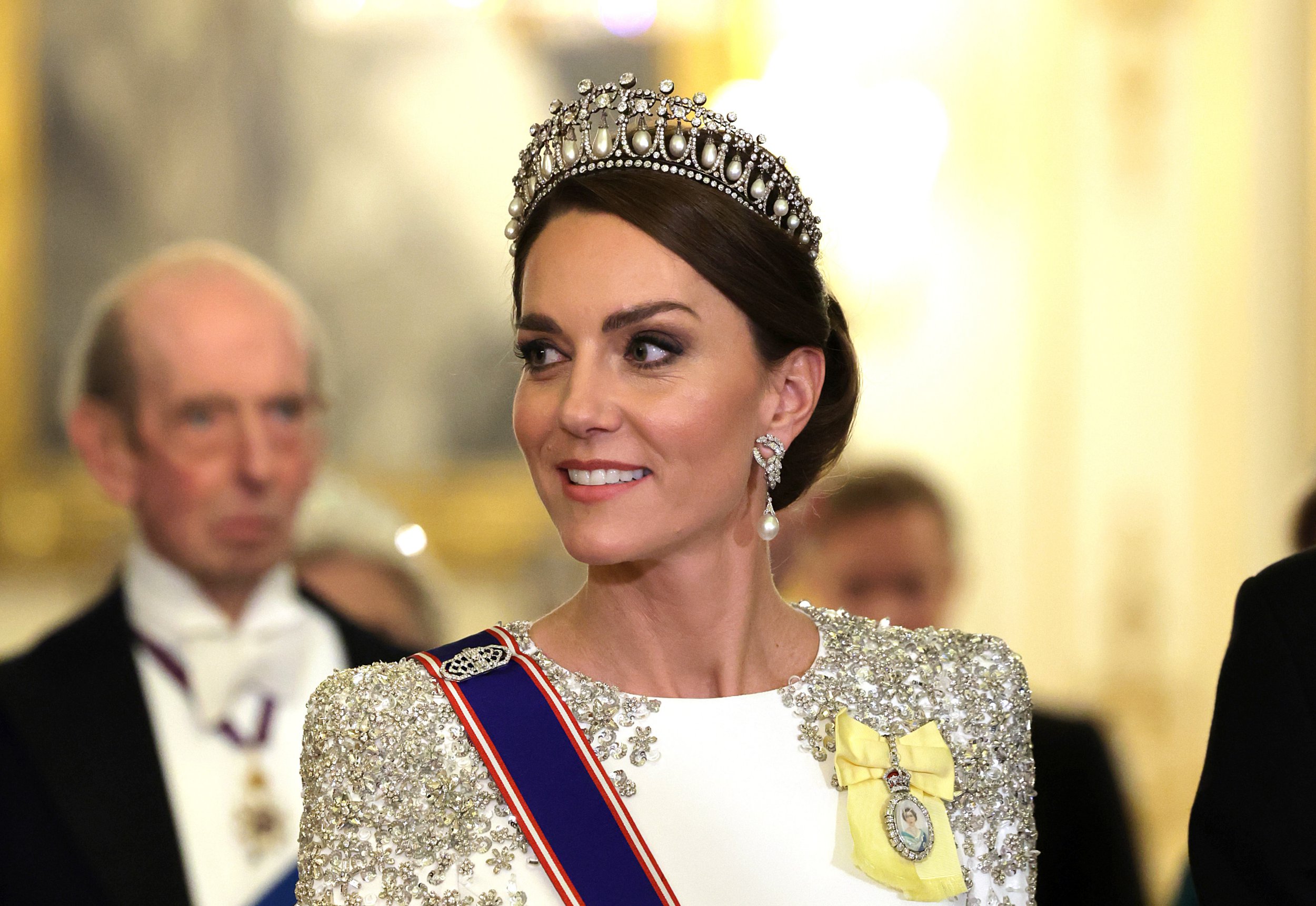 The Queen Consort and the Princess of Wales have donned poignant jewels at a glitzy Buckingham Palace event this evening.

King Charles has hosted his first state banquet as monarch with more than 160 prestigious guests in attendance.

The glittering white tie affair was in honour of the visiting South African president.

King Charles paid a touching tribute to his mother and her ties with South Africa tonight, saying she admired ‘its people, its vibrancy, natural beauty and diversity’.

Camilla the Queen Consort and Kate, Princess of Wales, also both paid tribute to the late monarch as they stepped out in Elizabeth II’s jewels for their own first state banquet in their new roles.

Kate beamed at guests as she wore a caped, white Jenny Packham floor length evening dress with sparkling detail on the shoulders, and her go-to tiara, the Lover’s Knot.

The headpiece, diamond and pearl-encrusted and made in 1914, was often worn by Diana, Princess of Wales.

The sapphire collection, sometimes known as the King George VI Victorian Sapphire Suite, was of great sentimental importance to the late Queen.

She also wore a necklace which once belonged to the late Elizabeth II.

The jewellery was a gift from the late monarch’s beloved father, George VI, for her wedding to the Duke of Edinburgh in 1947.

At his first state banquet tonight, Charles spoke on the sometimes troubled past relationship between the the United Kingdom and South Africa that ‘provoke profound sorrow’.

He also said ‘we must acknowledge the wrongs which have shaped our past if we are to unlock the power of our common future’.

Charles drew a gasp from the president who said ‘wow’ when the King said ‘welcome’ in six languages spoken in South Africa.

The King went on to say: ‘The late Queen had the great pleasure of hosting Presidents Mandela, Mbeki and Zuma for State Visits to the United Kingdom, at all of which I was present. On each of those occasions, she expressed her admiration for your country and its people, its vibrancy, natural beauty and diversity.

‘And she always talked warmly of her return to your country in 1995, as the guest of President Mandela, after the momentous events – driven from within South Africa and supported by so many around the world, including here in the United Kingdom – that brought democracy to your country.’

The King added: “During one of my own visits to South Africa, in 1997, President Mandela told me that he had conferred on my mother a special name – Motlalepula, meaning ‘to come with rain’.

‘I have been reassured that this was a mark of the particular affection President Mandela felt for the Queen… rather than a remark on the British habit of taking our weather with us.”