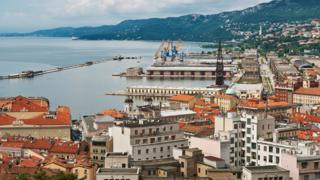 Residents of Trieste in northern Italy have left blankets and warm clothes in the street for a homeless man, outraged that their deputy mayor boasted of having thrown away the man’s “rags”.

The boast by right-wing Paolo Polidori caused a storm on social media and he has now deleted his Facebook post.

Stung by the criticism, Mr Polidori said he would get new clothes for “that tramp” if he went to a public shelter.

Leaving the gift, citizens apologised “on behalf of the city of Trieste”.

A journalist with the Trieste daily Il Piccolo tweeted a photo of the citizens’ sign, which also said “Dear friend, we hope that tonight you will suffer less from the cold”.

Trieste, like much of Italy, has been hit by freezing temperatures as a cold snap sweeps parts of Europe.

Mr Polidori, a member of Interior Minister Matteo Salvini’s right-wing League, said the “tramp” was a Romanian who had been prosecuted and ordered to leave Trieste.

The rough sleeper was begging on Via Carducci, a central avenue in Trieste near the port.

“My post has been exploited; I’m not a racist,” Mr Polidori said.

In his original Facebook post, Mr Polidori said he had happily thrown the man’s “mass of rags” into a bin. “As a normal citizen who has his city’s decency at heart, I gathered them up and threw them away,” he wrote.

“The message is: zero tolerance!! I want Trieste to be clean!!”

The League has long campaigned against poor migrants, many of them Roma (Gypsies), who live in makeshift shelters or caravans in Italian cities, or on the outskirts.

The party prides itself on a tough anti-immigration policy, arguing that Italy has taken in far too many migrants.