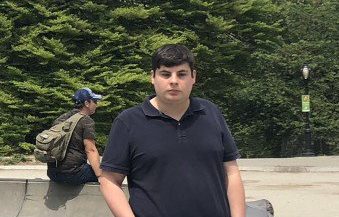 But the Milton Keynes local is bracing himself to pay slightly more income tax from April as the government throws tens of millions into higher tax brackets.

This means people who earn as much as Tappenden would pay about £500 more in income tax, gnawing at their around £6,700 monthly paycheques.

‘It’s being done purely to punish the middle classes and win popular support.’

Chancellor Jeremy Hunt said during his Autumn Statement today that lowering the 45p top rate would see the wealthiest paying £1,200 a year.

This will increase the number of additional-rate taxpayers by about 350,000, bringing the total to around one million.

Refusing to join that one million, Tappenden said: ‘I plan to emigrate to the US and hope to leave the UK at the earliest opportunity.’

Not everyone has this option, however. Hunt’s plan to put the public finances on sound footing will see countless low-earners fork out more tax.

Hunt refused to thaw a freeze on the earnings figures for the 20p basic and 40p higher tax rates that then-chancellor Rishi Sunak introduced in April.

Over time, this has quietly dragged more low-income people into paying for more income tax and is a freeze Hunt seems keen to prolong until 2028.

This is because rising wages and inflation will mean more people slip over the threshold for a higher tax rate, so isn’t any better in real terms.

Among those desperate for more support for low-income workers like her is Emily Payne, 42.

The senior care assistant at a nursing home lives in Worcestershire with her two boys, aged 11 and 17.

As her wages wither, she has been forced to consider cutting back her hours so she can get social welfare cheques to keep her afloat as fuel and food costs spiral.

‘I recently increased my hours to 33 hours a week, plus I try to do overtime when I can. The increase in hours and wages meant my benefits were reduced. Last month I got just £12 from universal credit,’ she said.

Payne said her salary has stagnated and is unlikely to go up anytime soon, especially to bring it up with the eye-watering 11.1% jump in inflation.

Jeremy Hunt has announced a £54 billion budget in a attempt to head off a recession. But how will the tax hikes and spending cuts affect you? #uknews #ukpolitics #budget #tax #spending #jeremyhunt #recession #costofliving

Capturing the economic pain ahead for people like Payne, household disposable income is set to fall 7% over the next two years, according to the Office for Budget Responsibility.

The financial watchdog said this would be the largest decline in living standards since record-keeping began in 1956.

And Kwasi Kwaterng’s calamitous attempt at trickle-down economics certainly didn’t help as it prompted the Bank of England to increase interest rates.

‘My mortgage has gone up by £100 a month in the past six months, as I am on a repayment mortgage that tracks the Bank of England base rate,’ Payne said.

‘From April, when the government’s contribution towards energy bills ends, my energy bill will go up by £100 a month.

‘My kids have been through so much. I want to be able to say yes to them more frequently — yes we can have the heating on, yes we can go out for dinner and go on holiday.

‘It’s horrible that I work so hard but still struggle to afford the bills. I teach my children that it’s important to work, but sadly I don’t think that’s always the case.’

Suzanne Samaka, 34, is a high-earner working for a bank in Watford.

She and her partner are preparing to pay some £2,000 extra in taxes over the next six years — but they’re more than happy to.

‘Our costs are definitely going up, across everything from energy and food to council tax and childcare,’ she said.

‘But we’ve just gone through a pandemic, and I believe higher earners should pay more tax to help the country get back on its feet.

‘Things like the NHS and education need to be funded.’