Kate and Prince William carried out a series of engagements in Country Durham, just two days before they are set to mark their 10 year wedding anniversary. And their visit had an important link to their wedding, celebrated on April 29, 2011 at Westminster Abbey.

During their day in Durham, the Duke and Duchess of Cambridge highlighted some of the organisations which benefitted from donations from Their Royal Highnesses’ Royal Wedding Charitable Gift Fund in 2011.

First, they visited a family-run farm near Darlington, Manor Farm.

There, they were taken on a tour by the owners of the mixed cattle, sheep and arable farm – Clare Wise and Stewart Chapman.

Kate and William heard how the Manor Farm owners are protecting the welfare of their livestock and were shown as well as some of the tools used at the farm including land rotation and feed sampling, in a bid to improve productivity and ensure that they are able to give back to the environment and increase sustainability. 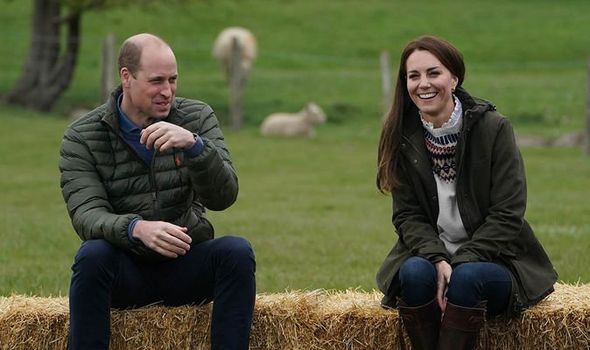 Prince William was particularly keen to hear about farming as he is directly involved in farming at Anmer Hall, the Cambridges’ home in Norfolk.

He is also getting more and more involved with the Duchy of Cornwall, which he is set to inherit when his father becomes king.

Moreover, given his well-known commitment to protect the environment through his patronages and the Earthshot Prize, the Duke of Cambridge was also keen on hearing more about sustainability and the impact the farming industry has on the ecosystem.

During this visit, Kate and William played with the adorable lambs before jumping on a tractor and driving it around the farm.