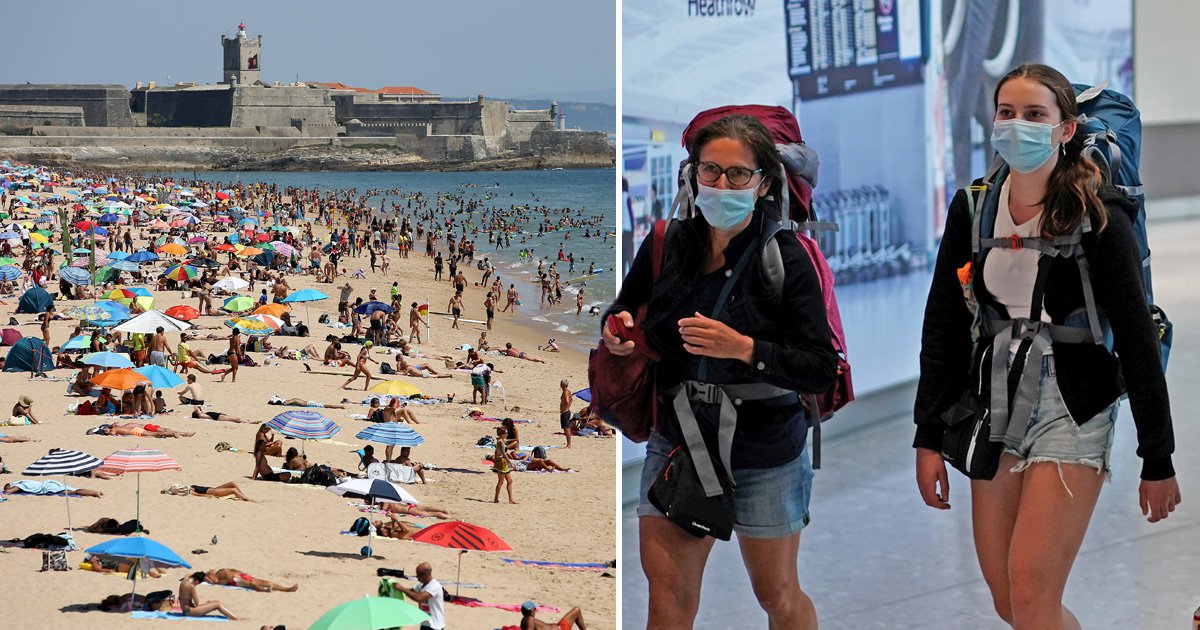 The government has missed an initial deadline to grade countries under the new traffic light system that will allow Brits to holiday abroad.

A report by the Commons’ Transport Select Committee last week said the lists needed to be published by May 1 ‘at the latest’, but the Department of Transport has now said they will be revealed in ‘early May’.

The missed deadline comes amid mounting pressure from the travel industry, with Jet2 forced to suspend flights and holidays until June due to the ongoing uncertainty over the travel situation.

Chair of the Transport Select Committee and Tory MP Huw Merriman said the industry had been ‘left in the dark’ and that the uncertainty ‘could cost people their jobs’.

Many people are eager to discover what countries are on the green list to avoid the need to self-isolate.

They delay means people will have just a few weeks notice to book a holiday for May, when more restrictions are set to be lifted.

The Government is reportedly set to announce next week that Brits will be allowed to holiday abroad from May 17.

The current ban on international travel will be replaced with the traffic light system, placing countries on a ‘green’, ‘amber’ or ‘red’ list.

But only a ‘tiny handful’ of countries will make it to the ‘green list’ at first, and travellers would still have to take a PCR test upon returning to the UK, even if they have been vaccinated.

If a country is on the ‘amber list’ – as most European countries are initially expected to be – travellers will have to quarantine and take tests upon their return.

A senior government source told The Telegraph that ministers believe they can ‘keep tight controls in place at the border while taking a significant step forward on international travel’.

The traffic light system will be reviewed at the end of June ahead of the busier summer months.

By this time, more of Europe would be on the ‘green list’ and it is hoped that vaccinated people will be allowed to travel while taking fewer to no tests and without the need to quarantine.

Initially, only Gibraltar, Israel, Iceland and Malta are set to be labelled green, and possibly the United States.

However Greece has already invited vaccinated Brits to holiday without the need for tests while Spain, Portugal and France have suggested they will follow suit in the coming weeks.

The expected loosening of travel restrictions comes as the UK has seen a sharp drop in Covid infections, hospitalisations and deaths.

Around one in 1,000 people in England are infected with the disease, a 40% drop on the previous week and a whopping 20-fold drop compared to January.

While the travel decision is yet to be formally signed off, government sources say plans on how to inform the public are already under way.

A press conference which could be headed by Transport Secretary Grant Shapps is reportedly being planned for next week.

Currently, anyone returning to the UK from abroad must quarantine for 10 days and take a PCR test on day two and eight, costing upwards of £200.

If they are returning from a red list country, such as India, they must book a £1,700-hotel quarantine package.

Under the new system, anyone returning from a ‘green list’ country will have to provide a negative Covid test within 72 hours of departure and pay for a PCR test to be taken on their second day back in the UK.

Those from an ‘amber list’ country must also take a pre-departure test before self-isolating at home for 10 days. They must then perform a PCR test on days two and eight of their quarantine.

The rules regarding travel from a ‘red list’ country will remain as they are, meaning travellers must spend 10 days in a government-approved quarantine hotel.

While the exact number of countries making the ‘green list’ is not yet known, it is believed to be fewer than 10.

Final decisions on grading countries will be made following the analysis of data from the Joint Biosecurity Centre, set to be released on Wednesday.

Only countries with a good vaccine rollout, low infection rates and a comprehensive testing regime will be rated green.

Most European countries, including holiday favourites Spain, Greece and France, will initially be branded ‘amber’.