He Came to Berlin to Change the World. Then the World Changed Berlin.

BERLIN — Not long ago, Sir Henry stood on the main stage of the Volksbühne theater in what was once East Berlin and conducted the cosmos.

In “Quarantine, For Solo Human,” Sir Henry, whose given name is John Henry Nijenhuis, did so as part of an interactive musical installation that sent a planet spiraling through a computer-animated universe using motion-sensor technology.

As he gracefully waved his arms, a delicate celestial choreography emerged. Earth hurtled through a galaxy that expanded and shrank at his command. His gestures also controlled the cosmic soundscape, adjusting the pitch and volume of a “space choir” that harmonized to a Bach prelude playing from a MIDI sequencer.

“Quarantine,” which streamed on the Volksbühne’s website during the pandemic-related summer lockdown, was the musician’s first solo work on the main stage of the theater where he has worked as music director for nearly a quarter century.

“The first six months of Covid were a blessing because I could just hole up in my apartment and conceive,” the 56-year-old Canadian said. His interactive installations fuse his passion for music with his interest in computer programming, a lifelong pursuit since his studies in the 1980s at The University of King’s College in Halifax, Nova Scotia.

On a stormy spring evening, I met Mr. Nijenhuis at the back entrance of the shuttered Volksbühne. Wearing an elegant brown herringbone overcoat, he ushered me through a labyrinth of backstage stairways to the theater’s Red Salon, a nightclub-like venue that has been off limits since the pandemic began.

Balancing himself precariously on a stool, he filled two glasses with water from the sink of the long-disused bar. He wore a black dress shirt unbuttoned at the top; his shoulder-length gray hair was pulled tightly back in a high ponytail.

Seeing him so comfortable and at home in the empty theater should hardly have come as a surprise. Few people at the Volksbühne have been here longer than he has. 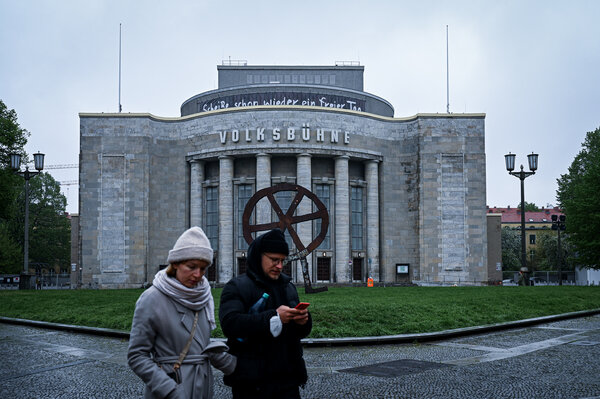 For at least a decade after the Cold War ended, the Volksbühne was arguably the most radical and artistically daring theater in Europe. As music director, composer and occasional actor at the playhouse since 1997, Mr. Nijenhuis has contributed to Berlin’s artistic flowering while living through dynamic changes that have redefined the city — and not for the better, in his opinion.

He savors his memories of post-Cold War Berlin, a wild, bohemian outpost of artistic experimentation spiced with a vibrant clash between East and West.

Mr. Nijenhuis unabashedly embraced the East German revolutionary spirit at the theater. “We had a job to explain socialism to the encroaching West in Berlin,” he said.

The theater “was a bulwark against unthinking, invasive forms of capitalism,” he said.

To his regret, that atmosphere evaporated over the years. “Nowadays, the reputation of Berlin is as a party place,” he said.

Nevertheless, few, if any, other North Americans have so decisively left their mark on Berlin’s cultural scene in the heady years that followed reunification. Mr. Nijenhuis has worked on more than 50 productions in his nearly 25 years at the Volksbühne.

“John is a mastermind of music,” said the director David Marton, who has worked with Mr. Nijenhuis since an acclaimed chamber version of “Wozzeck” in 2007. In an email, he suggested that Mr. Nijenhuis is “perhaps not recognized enough because he works mainly in the theater and ‘theater music’ doesn’t get much credit.”

Mr. Nijenhuis was born in 1964 in Newmarket, Ontario, to Dutch parents and grew up in Montreal and Halifax, Nova Scotia, where his father worked for British Airways. After college, he spent a decade in Toronto, developing a style of piano he described as “two-handed mash-ups of, for instance, ‘Stairway to Heaven’ with ‘Putting on the Ritz,’ or Ravel’s “Boléro” with ‘Take Five.’”

But professional opportunities for musicians in Toronto were limited.

In 1996, he was invited to perform at an arts festival in Berlin. The venue in Prenzlauer Berg, in the former East, didn’t have a piano, so he had to make do with a living room organ. The curious experience gave rise to his nickname, which is a tongue-in-cheek homage to a ’60s lounge organist, Sir Julian.

Although his festival appearance did not go to plan, Mr. Nijenhuis soon began working at the nearby Prater, a smaller venue run by the Volksbühne. His all-around musical profile, his knowledge of Kurt Weill and Prokofiev, but also Fats Waller and pop and rock, made him sought-after in the culturally omnivorous and experimental milieu of ’90s Berlin.

“You could just about walk out the door and find yourself at a happening,” he said of the moment. “There were many of those ruined houses, bomb-wrecked houses that were housing experimental music goings-on.”

That summer he traded the skyscrapers of Toronto for the coal-heated tenements of Prenzlauer Berg. If Berlin offered him a new home, the Volksbühne became his new creative family.

Back then, the theater was firmly under the direction of Frank Castorf, a provocateur who served as artistic director from 1992 until 2017. Mr. Castorf had a fondness for making mincemeat out of the classics in long, demanding evenings that were designed to shock theatergoers out of complacency.

But as the city gradually evolved into the national capital and headquarters to many of Germany’s biggest corporations, the milieu inevitably shifted.

By the early 2000s, the Volksbühne was struggling with its ideological focus, and as its productions became increasingly self-referential its audience began to drift away. And while the actors and directors were hurling Marxist provocations into the audience, the city was quickly succumbing to the capitalist forces their theater was meant to defend against.

“I was ensconced in a magnificent family,” Mr. Nijenhuis said. “We were all on the same page. I had a job to do, there were fiercely creative people and I lost track a little bit of what was outside this building.”

He added: “It was very easy to fall into a peaceful slumber and wake up when the city was gone.”

While Berlin continues to enjoy a freewheeling reputation, Mr. Nijenhuis believes the city has lost much of its creative soul. “The change has been from an adventuresome, very daring town with adventuresome and daring artworks into an irretrievably bourgeois pleasure palace,” he said.

As Berlin settled down, so did Mr. Nijenhuis. In 2015, he bought an apartment in Prenzlauer Bergand married the American poet Donna Stonecipher.

Increasingly, Mr. Nijenhuis has found creative fulfillment away from traditional productions, through programming and performing interactive musical installations like “Quarantine.” For the past 15 years, he has also collaborated with the German author and filmmaker Alexander Kluge, for whom he has scored movies and accompanied in live performances.

In one recent appearance, he tinkers around on a grand piano singing arias by Monteverdi and Purcell as Mr. Kluge, a towering figure in German culture, and the American poet and novelist Ben Lerner read their works.

Mr. Nijenhuis is one of only two ensemble members at the Volksbühne with tenure (it is rare for performers in Berlin to stay at the same theater for the qualifying 15 years and was rarer under Mr. Castorf, who had a penchant for firing people). Nevertheless, the recent era of managerial and artistic upheavals at the theater has been trying; by his own admission, he was “put in the broom closet” for two years by an artistic director who did not value his contributions.

Mr. Nijenhuis’s most recent appearance onstage, in a production of “The Oresteia” in October, showed what can happen when his talents and eclectic tastes are given free rein. The inspired musical selections ranged from Richard Strauss to Tom Lehrer.

“Had I stayed in Toronto,” Mr. Nijenhuis leaned in to tell me. “I would have probably become a bus driver.”