A dispute is said to have spilled out from an illegal encampment site and onto an estate in Grimsby, Lincolnshire, on Saturday night. Horrified residents there saw a girl whose leg was “covered in blood” and quickly called the police.

There were loads of them obviously drunk near the gate at the top of the car park. One of them was throwing pint glasses across the road while there was traffic

But the situation allegedly became more hostile as the incident progressed.

The travellers have not commented on any allegations.

One resident told Grimsby Live: “It all started when a girl came up the road shouting and screaming, it was hard to understand what she was talking about but she kept pointing in the directing of the field and saying something like ‘he did it’.

“When you looked at her leg it was covered in blood. She asked someone to call the police and they were on the scene pretty quickly.

“There was a group of the traveller men as well, pacing up and down the road while this was going on. It was about 11pm when the police arrived and they blocked the whole road off.

“[It was] just absolutely nuts, it is usually quiet around here and we thought we’d not see them on the field again with the bollards that had been put down on the other entrance.” 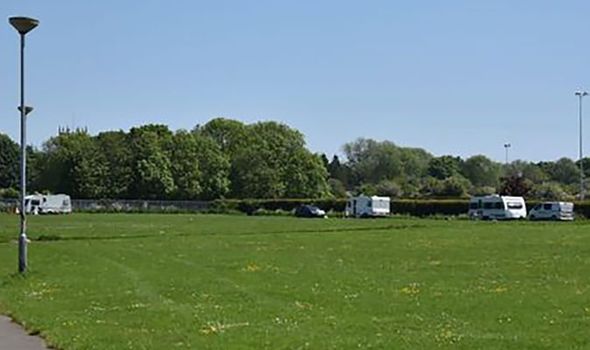 Another resident said: “I realised there was a load of the girl’s blood up one side of me as she’d been that close while I was calling the police.

“As I said, they weren’t threatening to me but they were all out in the streets last night. It looked like there were some real issues down Ladysmith Road with a guy dodging in and out of the traffic.

“It is normally quite quiet here so it does come as a bit of a shock.”

The Honest Lawyer, a pub on the estate, was allegedly forced to close early after the travellers hurled pint glasses at each other.

Photos show shards of glass on the ground the following morning.

On Sunday evening, the travellers had left the site, leaving behind piles of waste including gas canisters, toys, bottles and food packaging.

But when they arrived there, it is claimed the travellers snapped a lock and pushed a gate into a man’s chest while swearing at him. The man, Pete, is a member of staff at the Fusion Centre, a nearby gym and community centre.

Pete said he was advised to by police as there were concerns for children who were coming in for sessions at the gym and community centre.

The travellers were speeding through the car park in their vehicles according to Pete, 56, and in their haste they were putting the children being dropped off in danger.

Video footage shows part of the stand off between Pete and one of the travellers who he says destroyed a lock before pushing the gate into his chest saying “get out of our f***ing way”.

The Daily Express has contacted police for a comment.