A man was seen throwing a brick into the window of a Manhattan gay bar in the third attack at the same venue in one week.

Security camera footage from VERS bar in Hell’s Kitchen caught the perpetrator in the act on Saturday night. The suspect appears to be a middle-aged man with short, buzz-cut style hair and wearing glasses.

In the video, the man approaches the window of the bar, where at least four patrons can be seen eating at a corner table.

The man then lobs a large brick at the window. It leaves a massive crack in the glass before bouncing off. 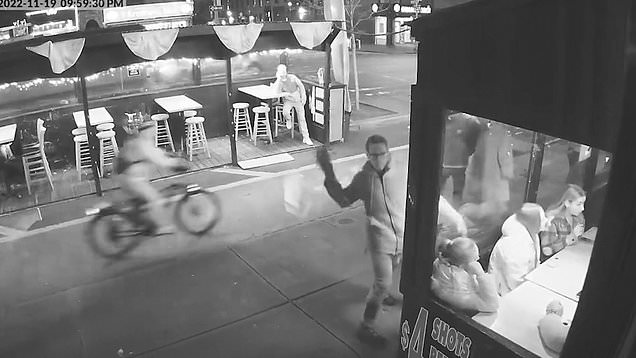 Although the perp appears to jog off the scene, he walks back as he appears to speak to witnesses on the street.

The NYPD said they were investigating the attack, but so far no arrests have been made.

VERS reopened immediately after the incident, posting a photo of the smashed window captioned ‘Come and join us for a drink! #BusinessAsUsual’ on their Instagram and Facebook pages.

This is the third attack on this particular bar in one week. On Sunday, November 13, a similar incident happened around 5.30pm.

Metro.co.uk has reached out to the owners of VERS bar for further comment.

Bottcher also implored any witnesses or people who recognize the man to come forward and speak to the police.

The attack occurred only hours before a gunman opened fire at a gay club in Colorado Springs, Colorado.

At least five people were killed and 25 were injured in the brutal shooting, which was only stopped when brave patrons were able to pull the weapon from the killer’s hands.