Gatwick and Heathrow airports have brought in equipment at an equivalent level to that used by the Armed Forces.

It comes after chaos caused by drone sightings around Gatwick last month affected more than 1,000 flights and disturbed the travel plans of around 140,000 people.

Sky News understands the anti-drone technology was deployed at Gatwick just a few days after the incident occurred between 19 and 21 December. 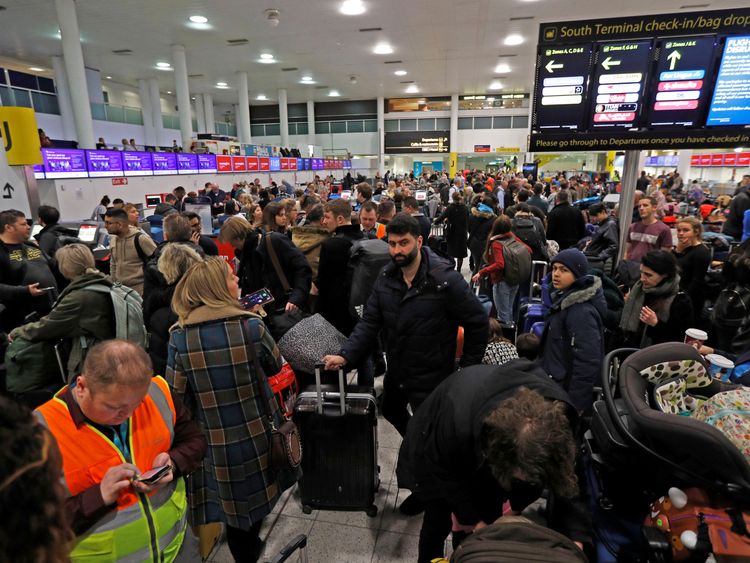 Earlier this week, the Ministry of Defence confirmed military equipment being used at Gatwick had now been withdrawn from the Sussex airport.

But the Armed Forces were said to “stand ever-ready to assist should a request for support be received”.

A Heathrow spokesperson said: “The safety of our passengers and colleagues remains our top priority.

“Working closely with relevant authorities including the Met Police, we are constantly looking at the best technologies that help remove the threat of drones.”

Neither airport would comment on the specific technology they are investing in.

The Israeli-designed Drone Dome system was reportedly deployed by the military at Gatwick amid last month’s chaos.

The system can jam communications between a drone and its operator, while it also uses a laser beam in order to locate and destroy hostile drones.

It is said to be able to intercept drones at a range of several kilometres.

A spokesman for manufacturer Rafael told The Times newspaper there had been a lot of interest in the product from the authorities in the UK and other nations, but declined to confirm whether Gatwick had bought a system.

A £50,000 reward is being offered for information to help bring to justice those involved in the illegal drone activity at Gatwick.

Police are examining relevant sightings by 115 witnesses, including 93 from “credible witnesses” such as a pilot, airport staff and police officers.

More than 1,000 house to house enquiries have also been carried out by officers.

No one has been charged and no credible drone has yet been found.

A couple who were arrested and questioned for 36 hours in connection with the disruption were released without charge.