PARIS — The French government plans to introduce a bill aimed at closing a legal loophole that allowed the man who killed a Jewish woman in an anti-Semitic frenzy in 2017 to escape trial because a court found that he was in a delirious state brought on by cannabis.

Justice Minister Eric Dupond-Moretti said Sunday that the bill would be presented in time for a vote by Parliament this summer and fill the “juridical void” that currently makes it impossible to “take account of the voluntary intake of toxic substances” leading to delirium in the commission of crimes.

France’s highest court ruled earlier this month that Kobili Traoré, who beat the woman, Sarah Halimi, before throwing her out the window of her Paris apartment to her death, could not be tried because he had no “discernment or control” over his acts. It upheld a verdict by a lower court to the effect that under current French law the origin of Traoré’s disturbed condition — intake of drugs — was immaterial.

The verdict set off a storm of protest from French and international Jewish groups. It also led to a large demonstration by French Jews in Paris on Sunday, and smaller ones in other cities, including Lyon and Marseille.

President Emmanuel Macron expressed his dissent with the ruling, unusual in a judicial matter, saying in an interview with Le Figaro that, “Deciding to take drugs and then ‘becoming mad’ should not in my eyes remove your criminal responsibility.”

The highest court, known as the Court of Cassation, recognized the anti-Semitic nature of the crime — “a frenzied anti-Semitic act,” according to the report of one psychiatrist — but said in effect that its hands were tied by the law. Mr. Traoré has admitted the killing and is in a psychiatric institution. 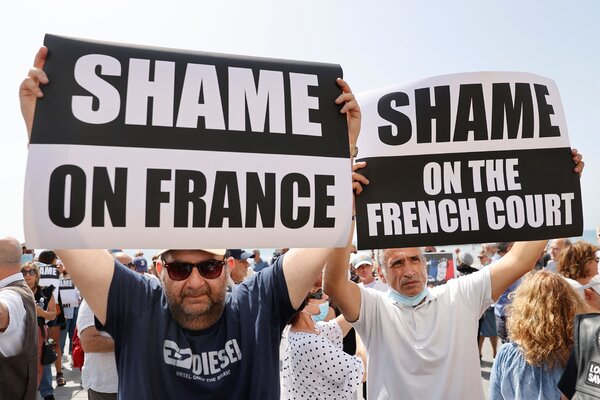 More than 20,000 people joined the protest in Paris on Sunday, according to the Interior Ministry, holding banners that said, “Killed because she was Jewish” and “Victim of a judicial shipwreck.” Before the demonstration, a top French judicial council expressed concern, calling for respect of the independence of the judiciary and a measured tone in discussion of the case.

The demonstration was attended by Anne Hidalgo, the Socialist mayor of Paris, who has said a street in the capital would be named after Ms. Halimi, who was 65. Other prominent attendees included Xavier Bertrand, a center-right candidate in the presidential election next year, and Bernard-Henri Lévy, the author and philosopher who has been active in denouncing rising anti-Semitism in France. Several speakers called for the new law, if enacted, to be called the “Sarah Halimi law.”

In a long interview with the magazine Marianne, Paul Bensussan, one of the psychiatrists asked to examine Mr. Traoré, tried to explain his rationale for finding him unfit for trial.

Mr. Traoré, he said, was hallucinating well before the murder itself, engaging in long soliloquies, responding to imaginary voices and consulting an exorcist. The level of THC, the main psychoactive compound in cannabis, found in his body was low to moderate, leading him and other psychiatrists to conclude that the drug “was a cofactor not the cause” in the assailant’s “blast of delirium.”

The sight of a menorah, and the fact Ms. Halimi was Jewish, “were the spark,” said Mr. Bensussan, who is Jewish. “The crime was that of a madman, but his crime was anti-Semitic because in his delirium he equated Jews with the devil. Public indignation and that of the Jewish community are, I believe, related to the false idea that recognizing insanity and the lack of penal responsibility mean denying the anti-Semitic dimension of the act.”

The intricacies of this argument appear to have done nothing to calm anger in France’s large Jewish community.

Mr. Macron, in his interview in Le Figaro, said that he wanted the justice minister to present a bill to change the law “as soon as possible.” Mr. Dupond-Moretti has now done that.