France Battles Over Whether to Cancel or Celebrate Napoleon

PARIS — Jacques Chirac couldn’t stand him. Nicolas Sarkozy kept his distance. François Hollande shunned him. But on the 200th anniversary this week of Napoleon Bonaparte’s death, Emmanuel Macron has chosen to do what most recent presidents of France have avoided: honor the man who in 1799 destroyed the nascent French Republic in a putsch.

By choosing to lay a wreath Wednesday at Napoleon’s tomb under the golden dome of Les Invalides, Mr. Macron is stepping into the heart of France’s culture wars. Napoleon, always a contested figure, has become a Rorschach test for the French at a moment of tense cultural confrontation.

Was Napoleon a modernizing reformer whose legal code, lycée school system, central bank, and centralized administrative framework laid the basis for post-revolutionary France? Or was he a retrograde racist, imperialist, and misogynist?

By paying his respects to Napoleon, Mr. Macron will please a restive French right dreaming of lost glory and of a moment when, under its turbulent emperor, France stood at the center of the world. The French obsession with the romantic epic of Napoleon’s rise and fall is undying, as countless magazine covers and talk shows have underscored in recent weeks.

But in the current zeitgeist, Napoleon’s decisive role as founder of the modern French state tends to pale beside his record as colonizer, warmonger, and enslaver. Mr. Macron is taking a risk. Officials close to him have portrayed his planned speech as an attempt to look Napoleon “in the face,” light and shadow. Others, however, insist Napoleon should be condemned rather than commemorated.

“How can we celebrate a man who was the enemy of the French Republic, of a number of European peoples, and also the enemy of humanity in that he was an enslaver?” Louis-Georges Tin, an author and activist, and Olivier Le Cour Grandmaison, a political scientist, wrote last month in Le Monde. 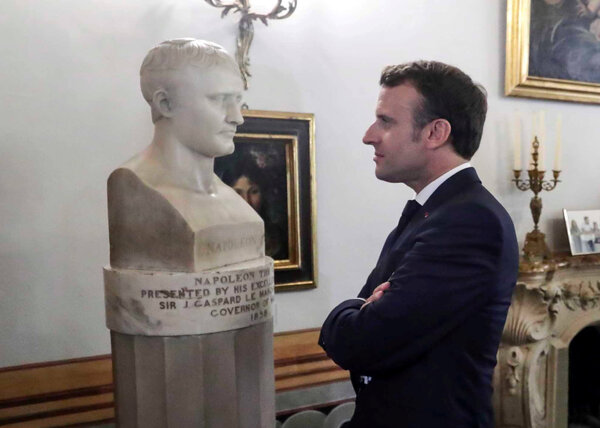 They argued that Les Invalides should be turned into a museum of France’s five republics and that Napoleon’s remains, like Franco’s in Spain, be returned to his family. The remains have already journeyed a long way. It took 19 years for them to reach France in 1840, after Napoleon’s lonely death at the age of 51 in British-imposed exile on the remote South Atlantic island of St. Helena.

“Yes, the head of state, the commander in chief, must bow down at the tomb of the victor of Austerlitz,” Jean d’Orléans, a descendant of the French monarchy, wrote in Le Figaro, referring to one of Napoleon’s greatest military triumphs. Honoring Napoleon amounts to “honoring the French people, honoring ourselves.”

Yet this brilliant general who fought to free Europe from the feudal shackles of monarchy also restored slavery by decree in the French Caribbean in 1802, after its post-revolutionary abolition in 1794.

Revolts in Guadeloupe and the then French colony of Saint-Domingue, now Haiti and the Dominican Republic, were ruthlessly repressed. Haiti prevailed, declared independence in 1804 and abolished slavery. France, the only country to have ended and then reinstated slavery, did not re-abolish slavery until 1848.

This history has tended to be eclipsed by the magnetism of the Bonapartist saga. Now, as with Jefferson’s slave-owning in the United States, or the criticism in Britain last year of Churchill for his comments about racial hierarchies, a new age has a new focus.

Claude Ribbe, whose book “Napoleon’s Crimes” caused an outcry when it was published in 2005 because of its descriptions of French brutality in the Caribbean, said: “We can commemorate him, but never celebrate him, because of the shadow of his racism, still felt in France today.”

This view has gained some ground as France has embarked on a reckoning, encouraged by Mr. Macron, of its colonial past, particularly in Algeria, and a vigorous debate has begun on whether the country’s purportedly colorblind universalist model masks widespread racism.

Josette Borel-Lincertin, the Socialist president of the departmental council in Guadeloupe, told Le Monde that her community would not participate in tributes to Napoleon, whom every Guadeloupian knows reestablished slavery. “We can only send from this side of the ocean the echo of our pain,” she said.

That echo, in mainland France, can seem faint. Fascination with Napoleon appears more potent than ever, as if, in a time of pandemic-induced uncertainty, he embodies everything France feels it has lost. Napoleon’s life remains a parable for many people, including Mr. Macron, of national action, and grandeur — flawed, no doubt, violent without question, but transformative.

This general by his 20s, this “Robespierre on horseback” bearing the anticlerical message of the 1789 revolution across Europe, this mastermind of the battles of Marengo and Austerlitz, represents a quintessence of French audacity and genius to a France that must now satisfy itself with being a medium-sized power.

Pascal Bruckner, a writer, said: “Why the obsession? Because with Napoleon, the Gallic cockerel became an imperial eagle. Now it’s just a tired old hen on its bell tower.”

Éric Zemmour, author of “The French Suicide,” typifies the right’s view of Napoleon. Mr. Zemmour likes to recall how it took all of Europe to defeat Napoleon in 1815. By 1940, Nazi Germany crushed France in three weeks. Today, he argues, the country has difficulty even controlling its borders.

It is this caricature of French decline that lay behind a letter last month from 20 retired generals that described France as being in a state of “disintegration” and warned of a possible coup. Marine Le Pen, the rightist leader who is the strongest challenger to Mr. Macron in next year’s presidential election, applauded it.

This is the delicate context of Mr. Macron’s tribute to a man who came to power in a coup. On May 9, he will mark Europe Day, a celebration of unity in the Europe that Napoleon reduced to the carnage perhaps best captured by Goya’s depiction of an execution in “El Tres de mayo.” The next day, May 10, Mr. Macron will commemorate the law passed in 2001 that recognized slavery as a crime against humanity.

Gabriel Attal, the government spokesman, said: “To commemorate is to have your eyes wide open on our history and look it in the face. Even with respect to choices that today look questionable.”

Mr. Macron’s choice is both political and personal. With the left in tatters, his main challenge is from the right, so laying a wreath at Napoleon’s tomb is also a way to counter Ms. Le Pen. But his own fascination with Napoleon — like him, a young provincial upstart who came to power from nowhere with a mission to remake France and change Europe — has long been evident in his recurrent musings on France’s need for “renewed ambition and audacity.”

“Macron is Rastignac,” said Nicole Bacharan, a political scientist, alluding to the hero of a Balzac novel who conquers Paris with his charm and guile. “And in the literary, political, strategic, military and intellectual range of Napoleon he finds a source of inspiration.” So, too, in the fact that France was then “the center of the world, for better or worse.”

Mr. Macron took former President Donald Trump to Napoleon’s crypt in 2017 — French presidents have tended to avoid accompanying foreign leaders there because Hitler paid homage to Napoleon at Les Invalides in 1940. If this was a history lesson, it had mixed results. “Napoleon finished a little bad,” was Mr. Trump’s summation.

A president born after the trauma of the Algerian war of independence, Mr. Macron wants to confront difficult history because he believes that openness will heal. This determination has prompted much-needed debate, even within his own government.

Elisabeth Moreno, the minister of equalities in France, has called Napoleon “one of the great misogynists.” The Napoleonic Code, long since amended, said “a woman owes obedience to her husband,” not an uncommon view at the time.

François-René de Chateaubriand, the 19th-century French writer and diplomat, observed of Napoleon that, “Living, he failed the world. Dead, he conquered it.” Something in his extraordinary orbit from imperial glory to the windswept island of his death will not let the French imagination be. The reason may be Napoleon’s hard-earned realism, as expressed on St. Helena to his secretary, Emmanuel de Las Cases.

“Revolution is one of the greatest ills with which the heavens can afflict the earth,” Napoleon told his aide. “It is the scourge of the generation that makes it; any gains it procures cannot offset the distress it spreads through life. It enriches the poor, who are not satisfied; it impoverishes the rich, who will never forget it. It overturns everything, makes everyone unhappy, and procures happiness for nobody.”

For Napoleon, as for all human beings, it proved impossible to escape the times he lived in.