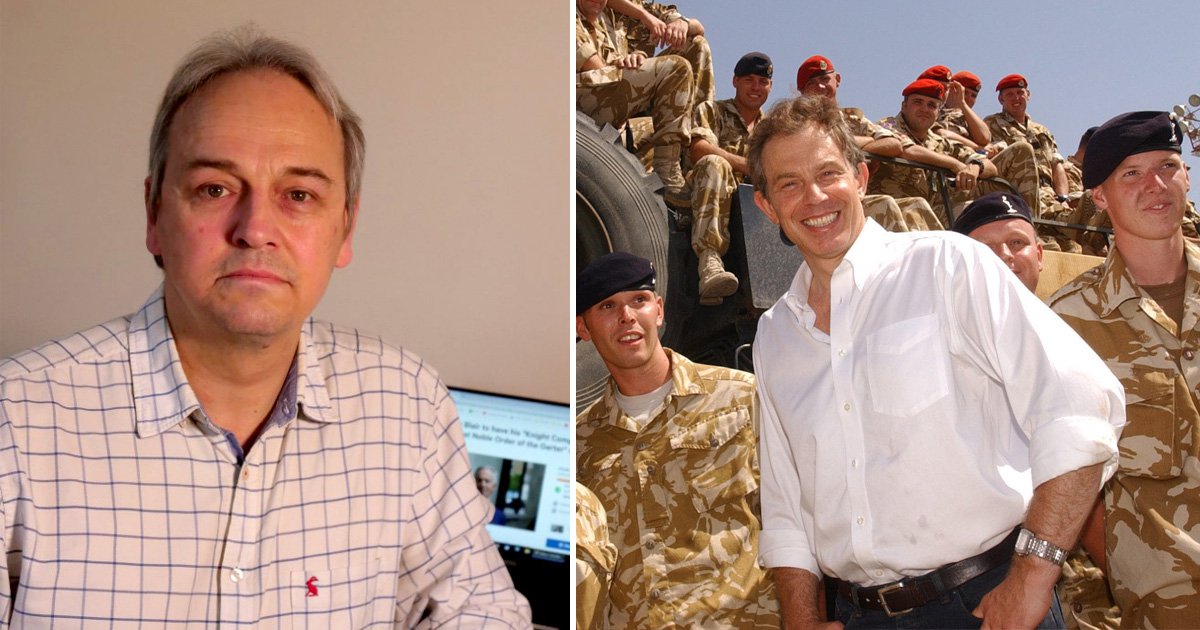 The founder of a trending petition to strip Sir Tony Blair of his knighthood has said he is ‘overwhelmed and genuinely moved’ as it hit a million signatures today.

Angus Scott remembered ‘the families of those who have suffered’ as a result of the UK’s military engagements in Iraq and Afghanistan as he reacted to the milestone.

The voice artist launched the online protest six days ago after the former prime minister was appointed Knight Companion of the Most Noble Order of the Garter, the oldest and most senior British Order of Chivalry.

Mr Scott, a married father of three from Norfolk, now believes Sir Tony should heed the ‘powerful, united message’ and hand back the rarely-bestowed honour.

He said: ‘I am overwhelmed and genuinely moved by the level of support that this petition has received. Every single individual who signed this petition should be proud of playing their part in this powerful, united message. It has been an honour for me to simply be the messenger.

‘In my view, the people that this petition truly represents are the families of those who have suffered the devastating and terrible consequences of the Iraq war and who clearly still bear that pain today.’

Sir Tony’s appointment was timed to coincide with the New Year’s Honours and makes him one of 21 non-royal ‘companions’.

Mr Scott, 55, launched the Change.org push on New Year’s Eve and it became the fastest-growing campaign on the platform by the start of the week. He has described himself as a royalist but has questioned Buckingham Palace’s decision-making process and the way it has thrust the Queen into the controversy.

Unlike parliament’s petition page, which did not accept similar campaigns because they do not fit its criteria, his drive cannot be considered for a House of Commons debate.

But Mr Scott feels the people have delivered a resounding verdict.

‘The focus must also now be on securing a realistic and achievable outcome,’ he said.

‘An outcome that preserves the nation’s enormous respect for Her Majesty, that helps assuage the pain of those who have directly suffered, and that provides conciliation for those whose signatures lie in this petition.

‘Mr Blair’s supporters state he is a principled and honourable man.

‘So, in this regard and from a humble and personal stance, I appeal to Mr Blair’s sense of honour, to validate his supporters’ faith in him by taking the higher path and courteously declining this award.

‘It remains in his power to deliver the most honourable and diplomatic solution, for all.’

The audio book presenter thanked ‘each and every person’ who signed the petition, which states that Sir Tony is ‘the least deserving person of any public honour’.

He added: ‘Our work must continue to increase the number of signatories to lend as much weight as possible to its message.’

British military families have been at the forefront of the outcry over the award, which is bestowed by the Queen.

John Miller, the dad of Cpl Simon Miller, who was murdered along with five Royal Military Police comrades in 2003, told Metro.co.uk earlier this week that the honour was a ‘kick in the stomach’.

Mr Miller continues to seek justice over the 21-year-old’s death when the Red Caps were beaten and shot dead by a 400-strong mob that stormed a police station in Iraq.

Britain’s most high profile former Afghan interpreter, who was present when Sir Tony visited Helmand Province in 2009, also joined the chorus of opposition to the award today.

Nazir Ayeen, who interpreted for Prince Charles and other British VIPs before being granted asylum in the UK, told Metro.co.uk that many of those who lost their lives or have otherwise made huge sacrifices on the ground have gone unrecognised.

Mr Ayeen said: ‘Tony Blair made the decision to take part in two major wars that led to millions of people being killed or displaced. Yet he receives a knighthood as a show of positivity and goodwill.

‘This is absolutely unacceptable for me as an Afghan and for the memory of all of the brave soldiers and civilians who have died or have suffered because of his decisions.

‘Like many Afghans, I have lost family members in the fight against the Taliban, and their sacrifices have gone unrecognised.

‘Those who laid down their lives, both British and Afghan, and the campaigners who fought for the interpreters to be relocated to the UK, have not received anything for their efforts.

‘It’s a stab to the heart of the mothers, fathers, sons and daughters of those who lost their lives in the war on terrorism.’

Sir Tony’s designation, which is for life, is extremely unlikely to be rescinded.

High-profile figures, including banker Fred Goodwin and nursing professor George Castledine, have previously been stripped of knighthoods, but this was for their actions after they were awarded the honour.

Her Majesty was said to be ‘graciously pleased’ to make the appointment in an announcement on the royal family’s website, which described the recipient as prime minister between 1997 and 2007 and chairman of the Tony Blair Institute for Global Change, a not-for-profit organisation.

Responding to his knighthood, Sir Tony said: ‘It is an immense honour to be appointed Knight Companion of the Most Noble Order of the Garter, and I am deeply grateful to Her Majesty the Queen.

‘It was a great privilege to serve as prime minister and I would like to thank all those who served alongside me, in politics, public service and all parts of our society, for their dedication and commitment to our country.’

Sir Tony, 68, found support from Keir Starmer this week when the current Labour leader said his predecessor deserved the honour.

Buckingham Palace declined to comment when approached by Metro.co.uk about the petition earlier this week.