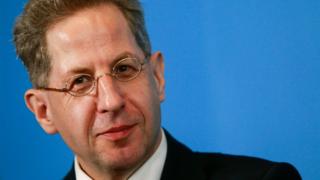 German spy chief Hans-Georg Maassen, who was controversially removed and placed in another role in September, has been fired from his new job.

Mr Maassen has been “placed in early retirement” over a speech he gave criticising government parties.

He lost his top job as director of the domestic intelligence service when he cast doubt over the existence of far-right violence in the city of Chemnitz.

He has now been fired from his new role in the interior ministry.

Interior Minister Horst Seehofer told reporters: “I have asked the president to place the head of the domestic security service in early retirement.”

Mr Maasen’s latest dismissal follows a departure speech given to other intelligence officials as he prepared to leave the Federal Office for Constitutional Protection (BfV) – which is similar to the British MI5.

While not officially published, one leaked copy showed he was extremely critical of the junior coalition party the Social Democrats (SPD), claiming that it harboured “left wing forces”.

Mr Seehofer, who had previously stood by the former intelligence chief, told reporters that speech made a trusting relationship “impossible”.

“I consider it unacceptable to speak of ‘radical left’ elements in parts of the SPD and describing security and migration policy as naive and left… also crosses a line in my view,” he said.

Mr Maassen’s first dismissal caused a great deal of controversy, as his move to the interior ministry was effectively a promotion. The political row which erupted over that decision temporarily threatened the stability of the governing coalition.