A “really nice” 14-year-old boy has been stabbed to death in east London – prompting tributes and a murder appeal from police.

Emergency services were called to reports of a stabbing in Barking Road in East Ham, Newham, just before 4pm on Friday.

Despite the efforts of paramedics, Fares Maatou was pronounced dead shortly after 4.30pm.

He thanked local people for coming forward and appealed to the public to help police catch the child’s killers.

“Fares’s family are, of course, absolutely devastated,” he said. “I have assured them of my total commitment to bringing to justice those responsible for this senseless killing.

“They will be supported by specialist officers at every stage of what will be a terrible ordeal for them in the weeks, months and years ahead.

“We have already seen fantastic support and received a good deal of information from local people. I thank them for that, and ask anyone with information or any witnesses who have yet to speak with police to please come forward and tell officers what they know.

“We are piecing together the picture of what happened on Friday afternoon, and every fragment of that picture will be crucial.”

He added that three boys had been arrested and remained in police custody.

“This is a fast-moving investigation and there will be further developments,” DCI Benton said. 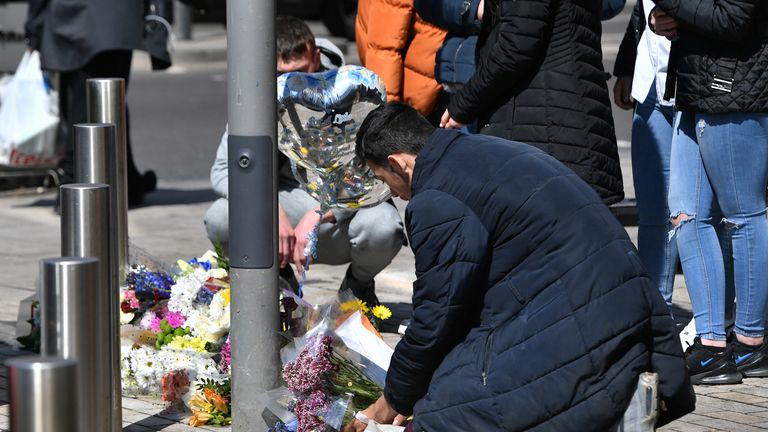 A pile of flowers and some balloons had been placed near the scene of the killing outside the Zzetta Soul Fired Pizza restaurant in Barking Road.

A close friend of Fares said he was not involved in any gang activity in the area.

The tearful 15-year-old said: “He was really nice. He had nothing to do with the gang stuff around here.

“He would just be there for you. If you ever needed him he would be there. He was happy. He loved life.”

Messages on cards at the scene referred to a “brother” and someone who “touched so many”, with one saying: “We miss you a lot we want you back.”

A small group of young people gathered next to the tributes, hugging and comforting each other.

A member of staff at the restaurant said a FedEx worker, an off-duty police officer and a woman had all rushed to the teenager’s aid as he lay in the street outside the restaurant.

“They were just shouting at him ‘wake up, wake up, try to breath’,” he said, adding that someone started chest compressions while he called 999.

“Three or four of us were all shouting loudly ‘one, two, three’, so there was a rhythm for compression.”

He said the victim, wearing a school uniform, was “totally blacked out”, adding: “I was hoping he would end up in hospital and stay alive.”

Police asked anyone with information to call the incident room on 020 8345 1570 or to contact Crimestoppers anonymously.