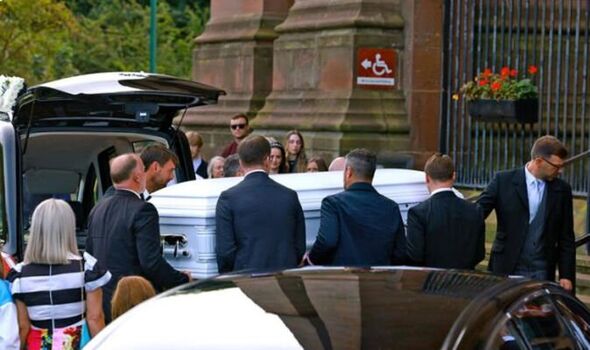 Ashley Dale, 28, died when a ­gunman opened her door and fired “indiscriminately” in Old Swan, Liverpool, on August 21, with her inquest being told she was not the intended target. She was discovered unresponsive by emergency services, close to her phone and empty shell cases.

The next day just over a mile away, Olivia Pratt-Korbel, nine, was fatally shot and mum Cheryl wounded trying to stop a gunman chasing a stranger into their home.

Yesterday, the hearse carrying a coffin arrived at the Anglican cathedral, topped with floral tributes that read “Daughter” and “Our Ash”.

Reverend Canon Juliet Stevenson said: “She was a vibrant beautiful young woman. She was going far in her chosen career in environmental health. Her family are devastated. They’ve lost their shining light.” Ashley’s family asked that donations for her go to charity Our Lost Love Years supporting children who are bereaved.

Ashley was one of four people killed in a horrific week on Merseyside – as well as Olivia, Sam Rimmer, 22, was shot in Dingle, while Karen Dempsey, 55, died after being stabbed in a pub car park.

Eight arrests have been made in the probe into Ashley’s murder, most recently with four men arrested in Cumbria and Liverpool.

Three have been released on ­conditional bail while the fourth was released pending further Police investigations.