FA Cup: Newcastle knocked out by Cambridge as third round sees cup upsets

League One side Cambridge United have dramatically knocked Premiership team Newcastle out of the FA Cup, after a 1-0 win at St James’ Park.

The FA Cup’s third round is traditionally seen one of the most exciting weekends of football, which sees lower league sides often get drawn against top flight teams.

Newcastle, which recently became the richest club in the world when it was bought by the Saudi Arabian government for an estimated £305 million, has only won one game so far this season, beating Burnley on 4 December.

Cambridge said its win was “the magic of the cup” on Twitter as the full time whistle went.

Championship side Reading were also dumped out the competition by Kidderminster Harriers, who play in the sixth tier of English football, after losing 2-1.

The Harriers came from 1-0 in the first half to mount a sensational comeback and move into the fourth round of the competition.

Elsewhere, Championship side Huddersfield beat Premier League strugglers Burnley 2-1 at Turf Moor – a good omen as it comes 100 years after the Yorkshire side won the same fixture – and in fact the entire competition – in 1922.

However, most of the afternoon and early kick-offs followed the script, with Middlesbrough beating Mansfield 3-2 and Man City, Brentford and Leicester all thrashing their opponents Swindon, Port Vale and Watford 4-1.

There was added drama in west London as Championship side QPR beat League One leaders Rotherham 8-7 on penalties after it ended 1-1 at the final whistle. 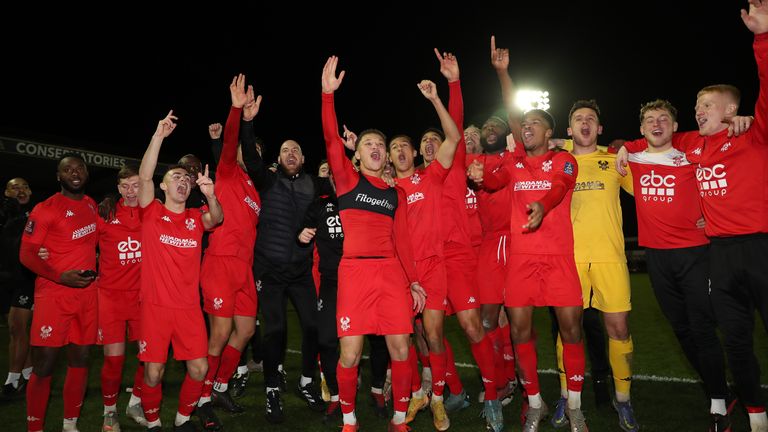 Saturday’s Late kick-offs include Conference side Chesterfield at Chelsea, who will be hoping to embarrass Thomas Tuchel’s men at Stamford Bridge, while Championship team Hull take on Premier League Everton.

Fixtures continue on Sunday, where League One sides Shrewsbury Town and Morecombe will be hoping to topple Premier League opponents Liverpool and Tottenham.