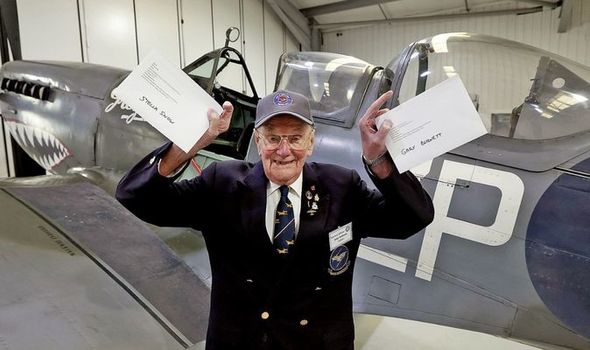 The Second World War veteran, 97, drew names from a bulging hat of 850 entrants at the fabled Biggin Hill fighter station in Kent. Readers Gary Burnett, of Cheadle Hulme, Cheshire, and Stella Snow from March, Cambs, will now reach for the sky in an awe-inspiring experience only a handful have had.

Andy said of his task: “I’d say it was even more nerve-racking than jumping out of a downed Halifax bomber. My knees were certainly trembling.” We teamed up with flyaspitfire.com, based at the Biggin Hill Heritage Hangar, to offer the fantastic prize, worth £2,975 a flight.

Stella and Gary will experience a Spitfire victory roll in the skies where The Few risked all to save Britain from the Luftwaffe in 1940.

Gary, 66, said: “When I received the email I thought it was a wind-up and I very nearly deleted it! Now I haven’t stopped smiling.”

Air ace Andy, from Tonbridge, Kent, signed up in 1942 at just 17 and served in Bomber Command, surviving 19 operations. But his luck ran out in 1945 when his plane was attacked by a German night fighter off the Danish coast, causing a huge fire at 18,000ft.

Andy and two others baled out before the bomber exploded, killing the four men left inside – and sadly, the two with Andy.

He was befriended by a Danish family who took him to hospital, but was caught by the Gestapo and became a prisoner of war until he was liberated by the Americans.

Andy said: “There is nothing quite like the noise of a Second World War aircraft and the smell of oil takes me back.

“It was wonderful to be among friends. If I could, I’d jump in and fly off once more in one of these magnificent aircraft.”

Spitfire competition entrants were asked to make a donation to the RAF Benevolent Fund.

Robin Brooks, of the Biggin heritage hangar, said: “It is our pleasure to give this lucky pair the opportunity to fly in a Spitfire and our pleasure to send much-needed revenue to the fund.”