‘Every Time I’m Calling, Someone Has Died’: The Anguish of India’s Diaspora

LONDON — First, there was the scramble to find her father a bed in intensive care. Then came the price gouging for an all but impossible to find therapeutic injection. And, through it all, countless hours on the phone with doctors, family and friends dealing with logistical problems.

From nearly 5,000 miles and five time zones away, Anuja Vakil, 40, has been struggling for the last 12 days to help manage care for her father, Jatin Bhagat, who lies in critical condition in a hospital in Ahmedabad, in India’s western Gujarat State. She knows he has been lucky to get care at all.

Cases of the coronavirus have exploded in India in recent weeks, up to nearly 400,000 a day, surpassing all records and still rising. As they have, so, too, has the collective grief and anxiety among the huge Indian diaspora, over loved ones lost or fighting for their lives amid a health-care system pushed past the brink. In WhatsApp chats, video calls, Facebook groups and forums, a global community has worried, mourned and organized.

Some 17 million people from India were living outside their homeland in 2020, according to figures from the United Nations, and millions more have Indian heritage, making the diaspora the largest in the world. In the United States, some 4.8 million people were either born in India or reported Indian ancestry on the last census.

They have looked on in horror as the country records more infections per day than any other since the pandemic began. For many, the pain has been accompanied by a realization of their worst fear: That when the people they love need them the most, they can’t be there to help. 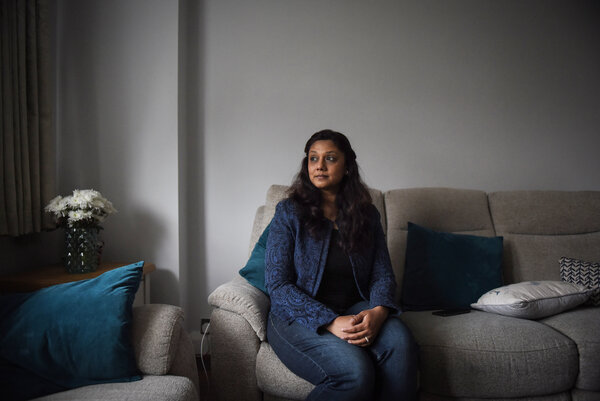 As Indians the world over have sought frantically to help sick relatives, London has emerged as an epicenter for Covid relief efforts from the diaspora. Many are organizing in the face of a seemingly impossible situation, pooling money to buy oxygen concentrators, connecting those in need of care with doctors and using community networks to share resources.

Deliveries of aid collected by the diaspora are beginning to arrive in India, alongside government relief from Britain, the United States, Germany and Australia among others.

Ms. Vakil has tried to focus on these positives. While it has been hard to be away from family, she says her local Indian community in London has proved to be a lifeline, and she speaks with a friend in New York whose own father is unwell. She tries to lift her father’s spirits with daily video calls, and his doctors are hopeful he can pull through.

Her father can’t speak because of the pressure-controlled ventilation helping him breathe, but nods in response when she speaks. She can see the small creases spread out around his eyes when she manages to make him smile.

India was added to Britain’s travel “red list” last week, halting nearly all direct flights and imposing an expensive and mandatory 10-day hotel quarantine for the few citizens and residents who are allowed in. And on Friday, the United States said it would start restricting travel from India beginning next week.

The restrictions, steep costs, job commitments and a fear of contracting the virus have left many unable to travel. As cases of the coronavirus continue to rise, many described painful conversations with friends and relatives at home, and a feeling of helplessness as they watched the horrors unfold half a world away.

Jyoti Minocha, a writer and substitute teacher who lives in Fairfax, Va., worries about her mother and sister in New Delhi. She recently lost a cousin, and said she checks in with family by phone daily. “The streets are hushed, ghostlike, my sister says,” she wrote in a text message. “The only sound you hear are ambulance sirens.”

“I speak to my mom almost everyday,” said Ansh Sachdeva, 23, a student at Bolton University in northwest England. “But every time I’m calling, someone has died. Someone has got Covid.”

He says that on the street in New Delhi where his parents live, no house has been untouched. He traveled home in November to help care for his parents and grandfather who had contracted the virus. But now he worries that they could fall ill again, and the new travel restrictions would make it impossible for him to get there.

In January, his mother had been the one worried about him returning to Britain, when a troubling second wave of the virus was taking hold there. “For them,” he said of the general perception in India earlier this year, “Covid was over.”

But it wasn’t over. Many Indians abroad watched with unease as the government allowed cricket matches in packed stadiums, mass election rallies and a major religious festival called Kumbh Mela, where millions gathered in one city. Meanwhile, case levels began to rise exponentially.

In Britain, home to a vibrant and diverse community of people with roots in India, the pain is palpable. In a neighborhood shop in Harrow, a community in London’s northwest with a large Indian population, two staffers recounted losing a brother in the last week.

The cultural ties between the two countries run deep, with Britain’s large Indian diaspora estimated to number over 1.5 million people — the single largest ethnic minority population in the country. For many, the loss, anxiety or grief they are experiencing as family members became ill in recent weeks are compounding what was already a difficult year, and just as Britain is emerging from lockdown and hopeful about crushing the virus.

Harmeet Gill, 31, was born and raised in London, but his parents are from Indian’s northern Punjab State, and they remain extremely close with extended family there.

“It’s a sort of double blow,” he said, noting that the Indian community in Britain was among the minority ethnic groups disproportionately hit by the pandemic. “We went through it here and we thought, ‘Well, at least India was protected.’ They were doing reasonably well.”

But it didn’t last, and on Monday his uncle died from the coronavirus. His aunt was hospitalized on Thursday. In pre-pandemic times, his family would all have traveled to India to mourn his uncle, a patriarch of a tight-knit Sikh family.

“It’s just the sheer, sort of, helplessness of it,” he said, adding that along with the shock and sorrow is a growing anger about government mismanagement. “They know it didn’t need to happen the way it has happened.”

Mr. Gill, who volunteers at a Sikh temple in the London neighborhood of Southall, has seen the impact of the outbreak in India ripple through his community, noting “the sheer scale of it means we all have become a bit numb to it now.”

The temple has been a hub of aid throughout Britain’s outbreak, delivering thousands of meals weekly, and members are now looking for ways to help back home.

Indian doctors living abroad have also been providing medical expertise and advice to dozens of friends and family members. Many wake early to go through dozens of messages asking for help, and some even provide video consultations.

Rajesh Hembrom, 43, originally from Bhagalpur in India’s Bihar State, has lived and worked as a doctor in Britain since 2003. His wife is also a frontline health care worker, and when cases surged in England early last year, his elderly father and older sisters were anxious.

“They were quite worried, and there was quite a degree of calm back home,” he said, “until it all erupted.”

But then the dynamic shifted, and as the numbers surged family and close friends began messaging, frantically seeking help. At the moment, he is advising around 30 people by phone, he said, helping to manage their care or offering any insights that he can. Some of the people he was trying to help have died.

“There are no proper help lines where they can call so they end up clutching at straws, and they know me, so obviously they contact me,” he said.

A childhood friend is being treated in a hospital in Mumbai, and family members are in touch with Dr. Hembrom daily. He fears his friend won’t make it.

“We see a lot of death in our medical work,” he said. “But never have I seen so many people so close to me that are already dead or are possibly going to die. It’s almost like a war zone in some ways, without a visible enemy.”