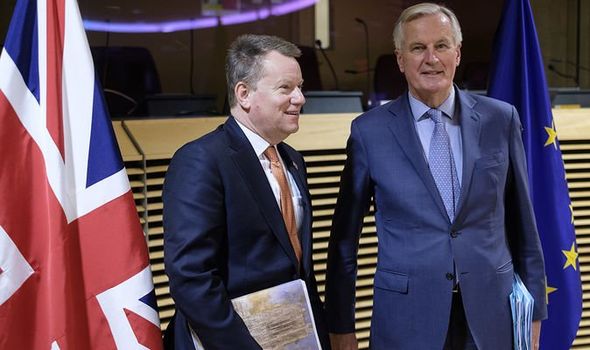 Talks with Brussels last month ended in deadlock over fishing rights and “level playing field” rules that will keep Britain tied to the bloc. A Downing Street spokesman said: “There are many issues that will be discussed during this week’s round, not least [a] level playing field, fisheries, trading goods and services.

“There are many areas where there is convergence but we will continue to work to plug the gaps where any differences remain.

“Our assessment is that a deal can still be reached in September.”

Brexiteers accuse Brussels of failing to treat the UK as an independent sovereign nation by continuing to demand Britain follows EU standards in return for continued access to the single market – as well as insisting on the same fishing rights it already has.

The Government says securing Britain’s sovereignty is the top priority and it is seeking only a deal similar to the one Brussels struck with Canada.

Mr Frost’s EU counterpart Michel Barnier said an agreement looked “at this point unlikely” and accused the UK of failing to show a willingness to break the deadlock after the July talks.

M Barnier warned there was a risk of no deal unless the UK changed its course on topics “at the heart” of the EU’s trade interests.

He said an agreement would be needed by October at the latest so it could be ratified before the Brexit transition period ends in December.

Mr Frost and M Barnier are due to have dinner in Brussels tonight and continue talks until Friday.

Mr Johnson has said repeatedly he will walk away rather than allow discussions to drag on into the autumn.

He argues British people and businesses must have certainty on the way forward before then.

If no deal is reached, Britain will leave the single market and customs union and do business with the EU under world trade rules.