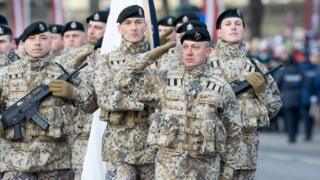 Most of the European Union’s member states have signed up to a plan for closer defence co-operation.

The UK and Republic of Ireland are among five states not participating.

The other 23 are now committed to the permanent structured military co-operation (“Pesco”) plan to boost their defence budgets and joint capabilities.

EU forces have gone to some hotspots, including the Central African Republic and Kosovo. But in some cases they have been short of funding and equipment.

Under Pesco, each country has to provide a plan for national contributions.

The participants will be backed by a European Defence Fund that should be worth €5bn (£4.5bn; $5.8bn) annually after 2020. The money will be used for weapons research and equipment purchases.

Deployment decisions would remain in the hands of national governments, an EU Council statement said. And Pesco does not replace member states’ participation in Nato or UN missions.

This agreement takes formal defence co-operation in the European Union to a new level. Britain, one of Europe’s most significant military players – and the one most sceptical about parallel EU defence structures to Nato – has not signed up since it is on the way out of the EU. Opponents of the EU in Britain will seize upon this as yet another step towards a “European army”.

This is about increased investment in defence and developing common military capabilities. There is no “European army”, in the same sense that there is actually no “Nato army”, it simply means that national military capabilities that exercise together can be brought under a single command at a time of crisis.

Indeed deploying troops “into harm’s way” is the ultimate exercise of national sovereignty and it is likely to remain jealously guarded. And better military capabilities for EU nations should clearly mean better capabilities for Nato too.

UK Foreign Secretary Boris Johnson said the UK saw promise in Pesco and pledged to be “supportive” from the outside.

“We are there, like a flying buttress to support the cathedral,” he told reporters.

US President Donald Trump has urged America’s European Nato allies to spend more on their own defence, arguing that they rely too much on US protection.

Russia’s military intervention in Ukraine in 2014 alarmed EU members that were once part of the Russian-dominated Soviet bloc.

Russia accuses the EU and Nato of unfriendly and threatening expansion up to its borders.