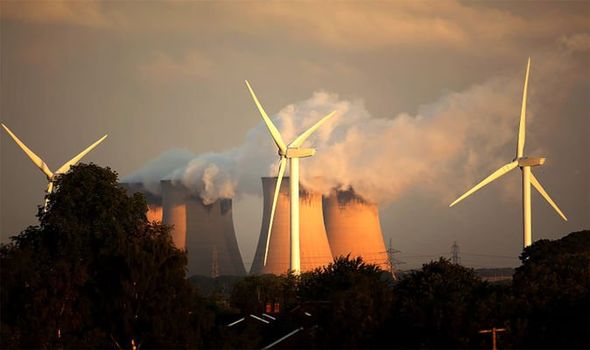 Ecotricity founder Dale Vince described the environmental fees as a “stealth tax” of hundreds of pounds a year.

He said: “The Government needs to end its energy bill hypocrisy – bemoaning high bills and promising to protect consumers, while adding levels of cost through VAT and a host of stealth taxes.

“The price cap is set to rise by £700 in April. Government could take half of that away by ending them.”

Mr Vince, who backs the Daily Express Green Britain Needs You campaign, suggested that North Sea gas suppliers should face a windfall tax. Some have increased profits in recent months.

He said: “These guys have made excess profits of about £20billion this winter supplying gas to Britain – from our North Sea.”

Mr O’Shea said: “Suppliers have to pass on higher wholesale costs to survive.”

Around 20 Conservative MPs and peers also called for VAT on energy bills to be slashed.

When I looked out of my window this morning in my south London home and saw the frost on the roofs I wondered how many older people were shivering behind their front doors, too afraid to turn up the heating.

At Age UK we know from what several of them are telling us that the fear of sky-high energy bills is causing many to take really difficult decisions in an effort to avoid a dreaded “red bill” landing on their doormats in a few months’ time.

We are hearing, for example, that some pensioners with very limited incomes are managing by living entirely off soup and sandwiches, too afraid to heat up their ovens.

Others among the elderly are no longer showering every day in order to save a few more pennies.

Older people typically feel the cold more than the rest of us, it’s just a fact of life. And many have long-term conditions that get worse if they do not keep warm.

Pensioners also tend to live in older homes that are more expensive to heat.

It’s not unusual to find that their heating systems are quite old fashioned too, without individual radiator thermostats, so the heating is either all on or all off.

In a home like this with worries about bills, you may decide to keep the heating off even if it is cold, or put it on for only very limited amounts of time.

All this adds up to a real emergency, right now, for the millions of older people who are not financially comfortable and who are facing the very real possibility of their energy bills doubling.

The circumstances that have brought this disaster about are completely outside of the elderly’s control and have happened through no fault of their own.

Indeed, many followed the advice to be a “savvy consumer” and shopped around for a low energy prices, only to find their supplier has now gone bust.

Every day that goes by without decisive action from government makes the situation worse, especially now with winter really starting to bite.

Our older population desperately needs to know that they will be protected from astronomical energy prices that are predicted to be coming in the spring.