Health Secretary Matt Hancock has said ministers are working with Heathrow Airport to find a way for coronavirus testing to reduce the quarantine period.

It comes as the airport unveiled plans for a new testing facility which it hopes will lead to the end of the mandatory 14-day quarantine for travellers returning from countries which have been removed from the UK’s safe list.

Arriving passengers will be able to book coronavirus swab tests and have results sent to them within seven hours.

Those testing negative could leave quarantine five to eight days after landing. 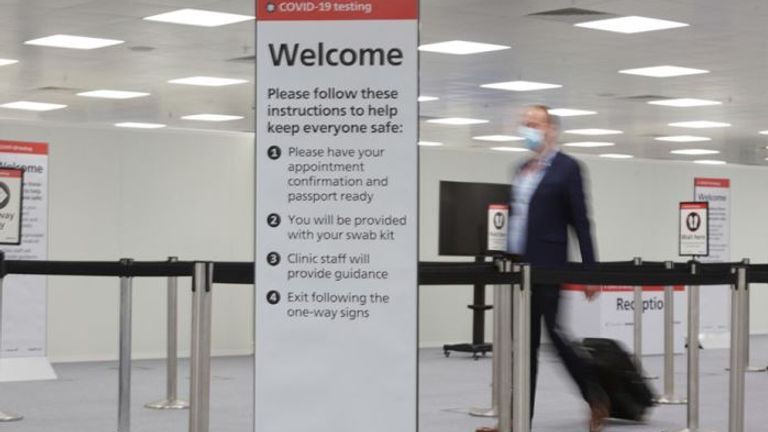 Heathrow said it has been working with aviation services company Collinson and logistics firm Swissport on a testing facility which is now “ready for use”, adding that the positive economic impact would be “significant”.

More than 13,000 passenger tests can be carried out each day using the existing facility, which can be further scaled with demand.

The pilot of the new testing procedure could be available as a private service to anyone with a flight landing at Terminal 2, and within a few weeks for those arriving at Terminal 5, it said.

The COVID-19 tests, which are identical to the swabs used by the NHS, would be booked online and cost £150, the Daily Mail reported. It is hoped this could fall to £50 a passenger – with a state subsidy.

Travellers can then do a second test at home a few days later and leave quarantine early if they pass both checks.

Similar double-testing schemes are being used in Germany and Iceland.

But the proposal needs government approval before it can begin in the UK.

Mr Hancock confirmed ministers are thrashing out details on the feasibility of such a regime.

He told Sky News: “We are working with Heathrow and other airports on this project.

“The challenge is – because the virus can incubate inside your body without coming forward and without therefore a test being positive even if you’ve got it – the challenge is how to do that testing in a way that we can have confidence enough to release the quarantine.

“It is absolutely a project that we are working with Heathrow on.

“I clearly understand the impact of quarantine on so many people’s lives. It is not something anybody would want to do.

“So I hope that this project can bear fruit.”

A Heathrow spokesman last week accused the government of playing “quarantine roulette” after a surge of coronavirus cases in France and other countries saw ministers suddenly remove them from the UK’s travel corridor list, sparking a mass exodus as hundreds of thousands of British tourists rushed back home.

John Holland-Kaye, Heathrow’s chief executive, said on Wednesday double-testing could have been in place for those caught up in the race to return to the UK last weekend.

“It will also open up flights to key trading partners such as the US, Canada and Singapore,” he said.

“The government’s own research shows that a double test has a high level of accuracy in screening for COVID.

“This facility is an oven-ready opportunity to see how Britain can safely reopen for business, as other countries are doing,” he added.

Documents released on Friday from Sage’s 18 June meeting showed the scientific group found “double testing of travellers significantly reduces the risk of false negatives and could enable quarantine duration of less than 14 days”.

Analysis published by the Office for National Statistics on Tuesday found that only around 28% of people testing positive for COVID-19 reported any evidence of symptoms at the time of their swab test, or at either the preceding or subsequent tests.

The remaining 72% of positive cases either did not report having any of the specific or general symptoms on the day of their positive swab test, preceding or subsequent swab tests, or did not answer both questions, the ONS added.

It said the findings suggested there was a “potentially large number” of asymptomatic cases.