Coronavirus: 102 Jet2 pilots to be made redundant, union says

Airline Jet2 is to make 102 pilots redundant after it rejected alternative proposals, according to a union.

In June, the British Airline Pilots Association (BALPA) union said the Leeds-based carrier was proposing cutting 102 pilot jobs after flights were grounded due to the coronavirus pandemic.

On Saturday, the union said Jet2 was pressing ahead with the cuts despite a range of alternative options put forward by BALPA. 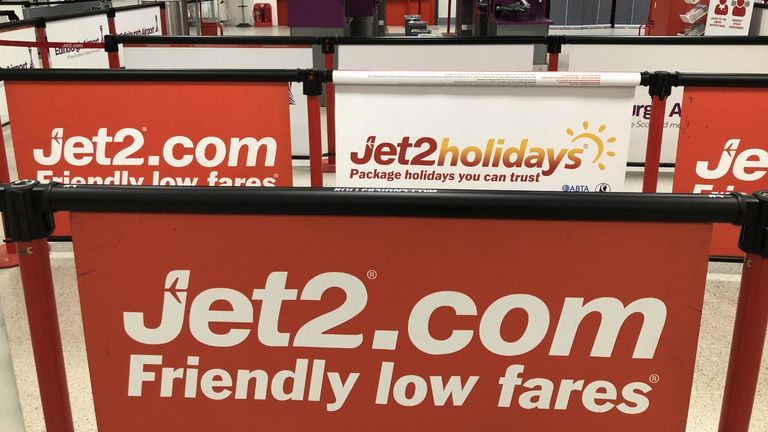 Several other airlines have announced job cuts after a collapse in demand caused by plummeting passenger numbers.

BALPA general secretary Brian Strutton said the announcement “is yet another which shows the desperate state of the British aviation sector”.

“Despite enormous efforts to work with Jet2 to find ways of saving these jobs, the airline is insisting on 102 redundancies.

“This will be a particular kick in the teeth as many of those who may lose their jobs have recently joined the airline after having been dismissed from Thomas Cook which went into administration last year.”

Mr Strutton called for government support for the industry, which has also been affected by new quarantine rules for passengers arriving from various countries which “keep throwing every restart plan into chaos”.

“If these quarantines are really needed, the government must stump up the support to help the airline industry, which is doing its best to get back on track but keeps being knocked back at every juncture,” Mr Strutton said.

The struggling aviation sector has looked to cut costs where possible in an attempt to survive the disruption stemmed by the virus outbreak.

It believes it will take years for passenger numbers and flight volumes to recover, with British Airways and easyJet among airlines announcing plans to cut thousands of staff accordingly.