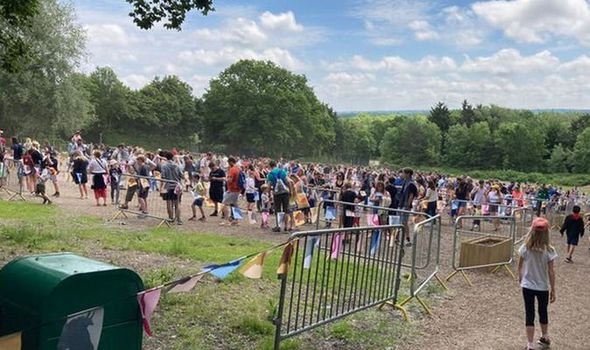 Visitors have arrived at the theme park and zoo to a huge wait to get inside and some went straight back home. Photos shared on social media show lines of people waiting at the entrance of the park in Surrey.

Dad-of-three Mark Taylor was one of those who “gave up” and left the park.

Another visitor said: “Absolute chaos. Queues you can’t see the end of, over an hour to get in. We’ve given up and are leaving with crying children.”

Another added: “What is going on with the queues to gain entry? I understand there is longer admission procedures but there is little or no customer service representatives to deal with the growing queues or the angry customers in the queues! Also at least offer water in this heat.”

According to one Twitter user, there are two people taking the temperature of every person entering the park, which would explain what’s taking so long.

Chessington World of Adventures has been approached to respond to this allegation and comment on the nature of the queues.

But one guest’s tweet states: “So now we’re two hours here, not entered, and in the queue for a bag check. Only two people taking temps currently for the WHOLE park. Something has failed here, and I can’t understand how Chessington believes this is normal.”

Under the Covid safety measures mentioned on the Chessington World of Adventures Resort website, it states: “As well as our staff undergoing daily, non-contact temperature checks, we will also ask you (aside from babies and toddlers) to participate in such checks as a condition of entry to the Resort.”

The attraction, around 12 miles southwest of central London, is owned by Merlin Entertainment.

The large company also operates nearby Thorpe Park and other theme parks, including Alton Towers.

It also operates the Legoland Parks, of which there are eight across the world.

Chessington World of Adventures said they will soon provide a statement on the queues.

According to the park, the queues are no longer ongoing with more information set to be provided shortly.