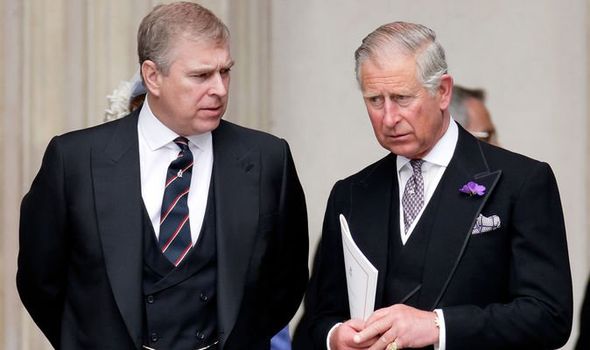 Nigel Cawthorne also said he believes the Duke of York will ultimately be stripped of all his royal titles as well as military and charitable roles ‑ but only when his older brother, Charles, becomes king. The author spoke out following new allegations by a key witness whose testimony helped convict Ghislaine Maxwell on five charges related to sex trafficking minors for her late partner, Jeffrey Epstein.

Carolyn Andriano, 35, said in an interview that after being recruited as an underage “sex slave” for Epstein, Andrew’s accuser Virginia Giuffre told her in 2001 that she had slept with the British royal.

Ms Andriano also claimed that Ms Giuffre, then 17, showed her the now-infamous photo of Andrew with his arm around her, and a grinning Maxwell lurking nearby.

Under US law, Ms Andriano’s claims will now be admissible in the civil case Ms Giuffre has brought against the Duke of York, in which she claims he sexually abused her on three occasions and is seeking “substantial” damages. Prince Andrew strongly denies the accusations.

Last week, however, it was reported that Ms Giuffre intends to refuse any offer of an out-of-court settlement and wants a full-blown civil trial to send a message that anyone “with power and privilege accused of abusing young girls will face justice”.

As early as this week, US District Judge Lewis Kaplan is expected to rule on whether the trial will go ahead later this year ‑ during the Queen’s Platinum Jubilee.

Mr Cawthorne said: “Even if the case were to be thrown out – and most experts believe that to be highly unlikely – Andrew won’t have completely dodged a bullet.

“The FBI still wants to question him in its investigation into Epstein’s rich and powerful friends and, unless he goes to court and is able to completely clear his name, he will forever be tainted by these accusations.

Accuser Giuffre “I think it’s true to say there is really no good outcome for him and he will end up with nowhere to run and nowhere to hide.

“Now that Ms Giuffre has said she won’t settle, he doesn’t seem to have any options.”

The biographer does not believe Andrew will be stripped of his titles while his mother is alive as “only she can take them away”.

He added: “I think he will be in serious trouble when his brother Charles becomes king.”