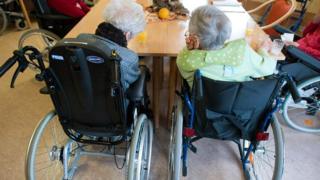 A Polish care worker who worked in German nursing homes for years has been charged with six counts of murder for killing his elderly patients.

Himself a diabetic, he used insulin to kill his victims, police said.

He is also accused of attempting to kill at least three more patients, and of three counts of aggravated assault.

The man, 36, has admitted administering insulin in the 12 known cases since April 2017, but denies intending to kill them.

He was arrested in Munich earlier this year, and police said they had since investigated 68 locations where he worked.

He had worked for various Polish and Slovak temp agencies across Germany since 2015.

His alleged purpose was to steal from his vulnerable patients, taking mostly cash and jewellery.

If there was nothing valuable to take, he would quit his job and find new work elsewhere, police said.

The case comes in the wake of that of a former German hospital nurse who is currently being tried for the killing of at least 100 people at two hospitals where he worked.

Niels Högel admitted at the start of his trial that he murdered 100 patients, making him one of the world’s most prolific serial killers.

Detectives say he administered fatal doses of medication to the people in his care – causing cardiac arrest – at two hospitals in northern Germany.

His motive, prosecutors say, was to impress colleagues by trying to revive the very patients he had attacked.

Högel, 41, is already serving a life term for six deaths while in his care.