Camilla gifted face masks by robot at pharmacy in Sussex

Camilla met today some of the member of the Rifles regiment who took part in the funeral of Prince Philip. The Duchess of Cornwall, who became the regiment’s Colonel-in-Chief in July 2020, spoke to one soldier of her pride at seeing the Rifles honouring the Duke of Edinburgh.

She said: “You all looked perfect. I felt very proud to be part of it.”

For her visit, Camilla donned a green coat with a brooch shaped as the badge of the Rifles.

Camilla was passed on this honorary military title by the Duke of Edinburgh himself.

Despite retiring from royal duties in August 2017, in July 2020 Prince Philip stepped out of Windsor Castle to take part in what became his last-ever royal engagement. 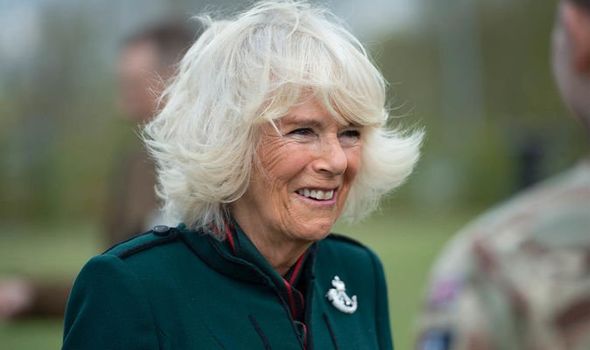 During the ceremony taking place in the Quadrangle at Windsor Castle, Prince Philip met Assistant Colonel Commandant, Major General Tom Copinger-Symes, and a few members of the Rifles.

After chatting and joking with them, he was given the salute by the officers and thanked for his decades-long service as Colonel-in-Chief.

He then officially relinquished the role, and passed it on to Camilla.

The infantry regiment of the Rifles was formed in 2007, but Prince Philip had been the Colonel-in-Chief of the regiments which eventually formed this infantry group since 1953.

The Rifles were one of the several regiments to be represented at the funeral of the Duke of Edinburgh taking place on April 17.

Members of the Welsh Guards, of which Prince Philip was honorary Colonel until 1975, also attended the funeral procession.

Similarly to what Camilla did today, on Wednesday Prince Charles thanked the Welsh Guards for the tribute they paid to the Duke last month.

The Prince of Wales, who followed in his father’s footsteps and became Colonel of the regiment, said during his visit at Combermere Barracks in Windsor: “I was so enormously proud of those of you who formed part of the compliment during my father’s funeral recently.”

Speaking on behalf of his family, he also said: “My family and I were deeply moved by the way you all performed your duty.

“And people from other countries rang me up to say that they had never seen something so marvellous, so beautifully done and with such dignity and style.

Most poignantly, he added: “I know my father would have been also enormously touched.”