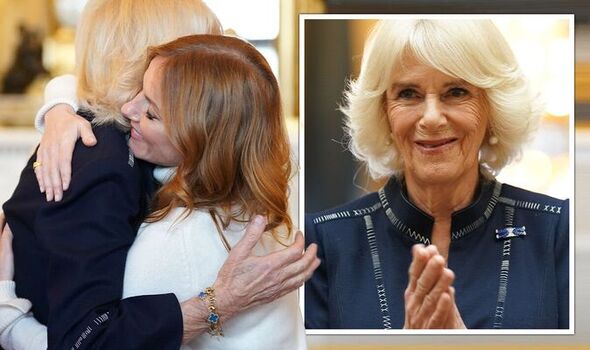 The Queen Consort hugged former Spice Girl Geri Horner during a reception for winners of the Queen’s Commonwealth Essay Competition, at Buckingham Palace on Thursday. Camilla welcomed the winners as she donned a smart navy dress with sparkles. The competition is the world’s oldest international competition for schools, delivered since 1883, working to provide opportunities for young people across the world.

As part of her charity work as the Duchess of Cornwall, Camilla championed reading so the event was notably important to her.

The Daily Mail’s Royal Editor Rebecca English tweeted: “The Queen Consort is holding a reception for winners of The Queen’s Commonwealth Essay Competition 2022 at Buckingham Palace to recognise young and talented writers from across the Commonwealth.

“She is expected to pay tribute to the power of literacy in bringing people together.”

Camilla also paid a fulsome tribute to her late mother-in-law today in her first speech in her new role.

The new Queen Consort compared her “dear” late mother-in-law and her devotion to the Commonwealth to her predecessor Elizabeth I, who famously said of herself: “You never had any that will love you better.”

She told guests: “I cannot begin without paying tribute to my dear mother-in-law, Her late Majesty, who is much in our thoughts today and who is so greatly missed by us all.

“She had been patron of The Royal Commonwealth Society since 1952 and throughout her remarkable reign, its vision to improve the lives and prospects of all Commonwealth citizens remained, as you know, very close to her heart.”