Call for living walls to be installed in polluted schools

Living walls are areas covered in plants that are able to absorb dangerous pollutants from the air.

Laurie Laybourn-Langton, director at UK Health Alliance on Climate Change, has told Sky News that not enough is being done to clean up the air.

He said: “It’s important that individuals, as well as the communities, businesses and schools in which they live and work, take measures to understand how air pollution impacts them and act to reduce their exposure, lowering the chance of harm.

“For schools, measures like living walls can help to improve the quality of air children breathe and therefore improve their health and well-being, enhance the look and feel of their environment and also educate them about air pollution and climate change.

“However the responsibility of cleaning up our air lies with government, which has the power, resources and duty to respond. Primarily, this requires the government to introduce new laws.”

It comes as two neighbouring schools in Chiswick, west London, are trying to fund raise thousands of pounds to cut dangerous levels of pollution in their area.

Andrea Carnevali, a parent at one of the schools – St Mary’s Catholic School, has set up a crowdfunding page to pay for a living wall and install air filters inside classrooms.

He says the Mayor of London has pledged £32,000 if the community can raise the rest.

“We are walking every day along the A4. Surely it can’t be good for [my son’s] health, but our health too,” she said.

The headteacher at the school, Joan Hart, implemented new measures immediately as soon as she read a report detailing the dangerous levels of pollution nearby.

She says outdoor playtime has been cut to a minimum and is calling for a nationwide programme to tackle the issue. 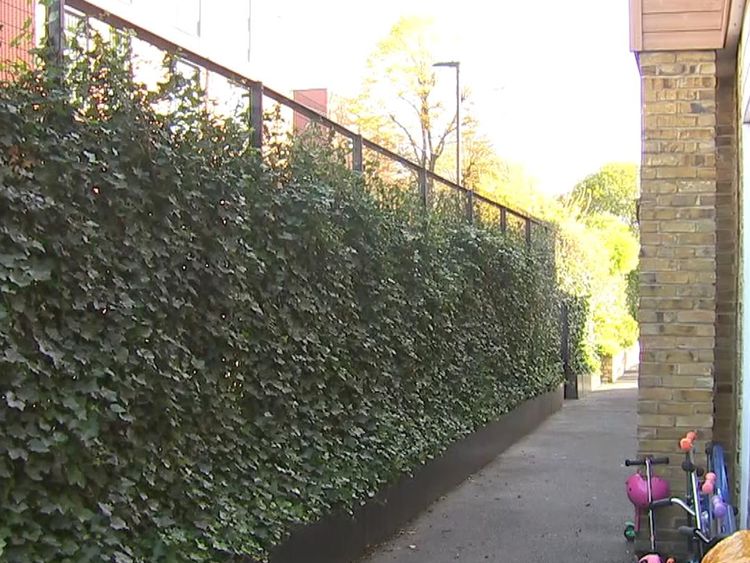 She said: “Obviously that needs large amounts of funding. We can’t do this on our own – we are a small closed community but we are working with our neighbours… and obviously the Mayor of London’s office as well.

“Long term, what are the implications on school budgets? Do I now need to have a budget code for pollution? It’s a little bit stark.”

Sky News spoke to schoolchildren at St Mary’s who described the pollution as smelling “bad”, saying they wish they could “play outside for a bit longer”.

An increasing number of schools are already investing in living walls in an attempt to try to reduce pollution.

A spokesperson for the Department for Environment Food & Rural Affairs said: “While air quality in the UK has improved significantly since 2010, we understand the risk it continues to pose to human health and realise more needs to be done.

“That’s why we have introduced a £3.5bn plan to reduce harmful emissions, published an ambitious Clean Air Strategy and will include air quality provisions in our forthcoming Environment Bill.

“We are also supporting local communities to deal with this issue through our Air Quality Grant scheme, which funds projects to tackle air pollution and reduce emissions affecting schools, businesses and residents.”