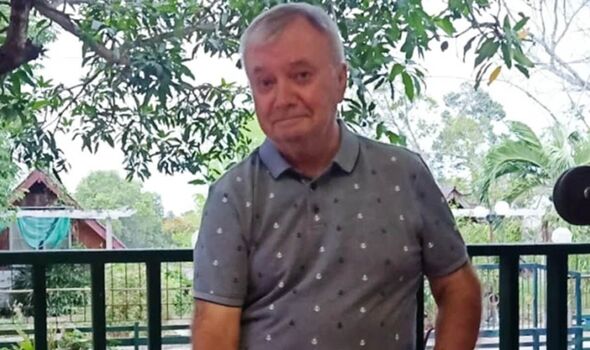 A British pensioner has been shot dead while driving his scooter in Thailand, with police investigating a “love affair or road rage” as two possible motives for the brutal killing.  Chilling CCTV footage shows the moment Neil Roger, 70, was shot four times in the back as he drove home on his moped after enjoying drinks with friends in Pattaya on Thursday evening.

Locals reported hearing the gunshots and found Mr Roger, from Doncaster, in a pool of blood shortly before 10.30pm.

Four bullet shells were found on the road nearby.

CCTV cameras captured the moment a car followed the pensioner before speeding ahead of him and stopping in front of him.

A man then leaves the car carrying a handgun which he fires three times at point-blank range as Mr Roger passed by.

The gunman then returns to his car before speeding away.

Mr Roger’s girlfriend, 38-year-old Thitipan Kamlas later arrived at the scene of his death where she collapsed in tears.

But sadly Mr Roger could not be saved after paramedics performed CPR and died after suffering severe blood loss.

Police have since seized Ms Thitipan’s phone and are interviewing her over the possibility Mr Roger was involved in a love triangle.

He said: “The girlfriend’s phone has been confiscated and we are checking all the communication she had with Neil and other people.

“The victim could also have been involved in a dispute with other foreigners or road rage while he was riding home. We do not know the motive for the murder. Nobody has been arrested yet.

“We are still investigating and collecting all of the evidence.

“Three motives we are looking at firstly are that the victim was involved in a love affair, road rage or a dispute. We are also planning to interview the last people who saw the victim before he went home. They will know if he had an argument before leaving on his bike.

“We have to decide if the attack was planned or it happened suddenly, after something like a fight in the bar.

“The shooter left quickly without any clues and there were no witnesses who saw them, so we do not know yet if they were on foot, on a motorbike or in a car.

“We have all the evidence we need from the scene and the road is open again.”

Mr Roger had been living in Thailand for 20 years, and had a Thai family, according to police.

Ms Kamlas and Mr Roger had been together for for four years. She told police they lived together but their marriage had never been registered.

She told police her partner was a retired engineer from England who had been visiting his sick sister at Christmas before returning to Pattaya on Wednesday, January 4.

On the day of his death, Mr Rogers went out drinking with friends at 4pm while she stayed at home.

Ms Kamlas said she got a phonecall to tell her Mr Rogers had been shot.

Police said she told them she did not know whether he had any disputes with other ex-pats or locals.