Brexit Trade Deal Gets a Final OK From E.U. Parliament

BRUSSELS — The European Parliament has voted by a large margin, in results released Wednesday morning, to give the European Union’s final approval to a Brexit deal already beset by difficulties, complaints and a court challenge.

The vote was 660 in favor, with five against and 32 abstentions.

While the outcome was never really in doubt, the Parliament expressed considerable concerns about the trustworthiness of the current British government to carry out in good faith the two key documents of Brexit: the Withdrawal Agreement and the Trade and Cooperation Agreement, which was just approved.

The latter agreement, which governs trade and customs issues and provides for zero tariffs and zero quotas, has been applied conditionally since the beginning of the year. It was finished on Christmas Eve and was ratified by the British Parliament on Dec. 30. But a negative vote by the European Parliament would have killed it, producing the “no deal Brexit” that neither side favored.

The European Parliament had delayed its vote to protest Britain’s handling of Northern Ireland and the protocol that governs trade on the divided island. Britain’s actions are the source of a legal complaint filed by the European Commission, the executive branch of the bloc, after Britain unilaterally extended grace periods for not conducting checks on goods being transported between Northern Ireland and the rest of Britain.

The two sides have yet to find common ground on how to implement the Northern Ireland protocol, which aims to protect the single market while avoiding a hard border with Ireland, a member of the European Union.

The mistrust ran through the debate. Christophe Hansen, a key legislator on Brexit from Luxembourg, said that a positive vote “should not be seen as a blank check to the U.K. government or a blind vote of confidence in that they will implement the agreements between us in good faith, but it is rather an insurance policy from our perspective.”

The trade and cooperation agreement, Mr. Hansen said, “will help us remind the United Kingdom of the commitments it has signed up to.” 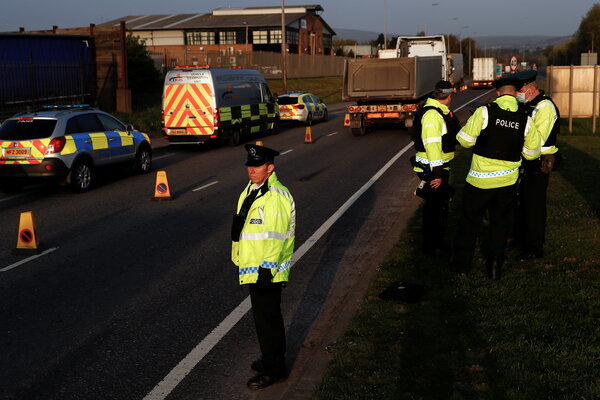 Terry Reintke, a German Greens legislator, said: “This deal is not good because Brexit is not good. The situation is also complicated because we cannot be sure how trustworthy the U.K. government really is. Still, this agreement can be a starting point reconstructing what we lost due to Brexit.”

Manfred Weber, a German who heads the largest party grouping, the center-right European People’s Party, put it bluntly on Twitter. “We will vote in favor of the post-Brexit T.C.A.,” he wrote referring to the trade agreement. “But we are concerned about its implementation, because we do not trust Boris Johnson’s government.”

There were numerous worries expressed about Britain misusing or undermining the complicated arrangements on fishing rights as well as the Northern Ireland protocol.

David McAllister, a German legislator who is half Scottish, said some of the problems encountered so far were from teething issues, but some derived from “the kind of Brexit the U.K. has chosen for itself,” which will mean increasing divergence from the European Union single market. That by itself will require continuing discussion, he said, as well as working through areas left out of the Brexit deal, including financial services and foreign and security policies.

Brussels was committed to work on practical solutions between Northern Ireland, Ireland and mainland Britain, he said. “But the protocol is not the problem, it is the solution. The name of the problem is Brexit.”

Asking the Parliament to ratify the deal, Ursula von der Leyen, the president of the European Commission, promised that Brussels would use the dispute and enforcement mechanisms in the deal to ensure compliance by Britain. If Britain failed to honor its commitments, she said, she would not hesitate to impose punitive tariffs.

“The agreement comes with real teeth — with a binding dispute settlement mechanism and the possibility for unilateral remedial measures where necessary,” she said. “We do not want to have to use these tools. But we will not hesitate to use them if necessary.”

Unhappy with Britain, the Parliament had delayed ratification twice. But the conditional implementation would have run out at the end of April, so the Parliament finally cast its vote.

After a debate of nearly five hours on Tuesday, the legislators, many of whom were attending virtually, voted remotely, with the final totals revealed only on Wednesday morning.

Michel Barnier, who was Brussels’ chief negotiator with Britain, thanked the legislators for their diligence. He praised the deal but warned: “Everyone has to shoulder responsibility and respect what they have signed up to.”

But he summarized the feelings of many when he said: “This is a divorce, a warning and a failure, a failure of the European Union, and we have to learn lessons from it.”

Ratification would mark a new chapter in relations with Britain, for good or bad, Ms. von der Leyen said. She hoped, she said, that it would represent “the foundation of a strong and close partnership based on our shared interests and values.”

Britain voted to leave the European Union nearly five years ago, in a referendum in June 2016. The complications of Brexit, and the continuing struggles over its implementation, have served if nothing else to end talk in the rest of the European Union about making a similar exit.