Thirty-five Tory MPs have written to him, warning the present system is “unfit for purpose”. The letter comes amid concerns there are divisions among senior cabinet ministers over the overhaul of asylum rules. The MPs, who are members of the backbench “common sense group”, want the PM to give Ms Patel the support she needs to put her plan into action.

The MPs say that Britain has a “just and noble national commitment” to provide refuge to people experiencing persecution but they fear the system is being abused by economic migrants.

They write: “It is a great injustice that those migrants who are healthy and wealthy enough to cross the Channel in pursuit of economic advantage – facilitated by heartless people traffickers – receive priority, stretching the limited capacity of our asylum capability and inhibiting support for those in genuine need – including those who, because of their faith, are hounded and hunted overseas… 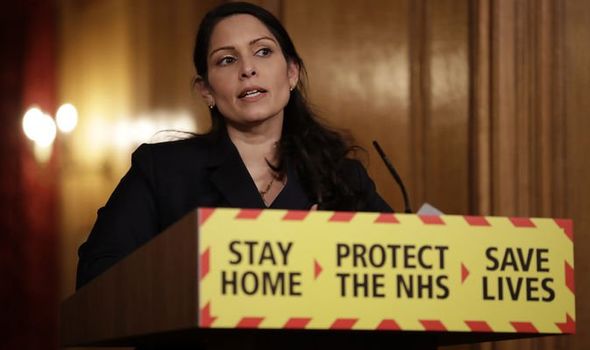 “Vexatious claims have created a highly lucrative industry for a small clique of unscrupulous, financially-motivated lawyers, who prioritise financial gain over the interests of those they purport to represent. So, we welcome especially the Home Secretary’s plans to introduce a ‘one-stop’ process, requiring all rights-based claims to be considered together in a single, up-front assessment.”

The MPs urge the PM to go ignore the “self-interested criticism of these plans by the wealthy liberal establishment” and to introduce further reforms.

These include a “strict time limit on the asylum application process, during which the Home Office should securely accommodate and supervise applicants” and the “automatic rejection of claims by those who have travelled through any ‘safe’ country and/or claims which are not logged immediately after arrival in the UK”.

In addition, they want a “renewed, proactive programme of deportations”.

The MPs, who include former security minister Sir John Hayes, conclude: “Now, it is finally time to take back control of our borders and so secure the integrity of our nationhood.”