‘Barbaric mutilation’: The rise of ear-cropped dogs in the UK

Fifteen-week-old American bully Zeus was asleep in a makeshift kennel area when RSPCA and police inspectors discovered him among a litter of nine puppies all with cropped ears.

The unhealed wounds were red and crusty, the charity said; the scars of a practice it describes as “mutilation” and “barbaric” and which is illegal to carry out in Great Britain.

Seized from a property in Bristol in January, Zeus later needed to have surgery as staples used to seal the wound had become embedded inside his right ear. Five months later, he has been rehomed and is doing well – but while his case would have been rare just a few years ago, vets and animal welfare charities say this is something that is now on the increase. Figures given exclusively to Sky News from a new BVA survey of 522 vets show 58% say they have been presented with dogs with cropped ears in their practices in the last 12 months, with 61% of those saying numbers are up from the previous year. And Battersea Dogs And Cats Home says it took in just one dog with cropped ears in 2016 – compared with 12 in 2020.

The procedure on Zeus and his siblings was an extreme case and the owner was sentenced to 14 weeks in prison in May after pleading guilty to permitting the cropping, admitting he had paid £3,000 for someone else to carry it out. This is believed to have taken place illegally in the UK.

However, many other dogs are being imported from other countries and sold on legitimately here. While this is currently legal, animal charities argue that any cropping is cruel and unnecessary and done purely for aesthetic reasons, and that imported cropped dogs fuel an increasing demand that ultimately leads to a rise in backstreet methods being used.

The RSPCA has seen cases involving kitchen knives and scissors and says that in “underground” procedures the animals are often not given anaesthetic pain relief.

Experts say one of the big reasons behind the increase is celebrity – stars and influencers sharing photographs of their own ear-cropped dogs on social media.

“It’s being driven very much by a shift in trend in the type of dogs that are being used in advertising, on social media, and that celebrities are posting on their channels,” RSPCA spokesperson Amy Ockelford tells Sky News. “What is concerning is that a lot of people are sort of endorsing this look and aren’t actually realising that what they are sharing is something that is illegal in this country and is a huge welfare concern.”

“I think inevitably that normalises this look and popularises the attractiveness of it,” says BVA president James Russell. He believes it would help the situation if celebrity owners “use their status… to reiterate that this isn’t something that we feel is right and is certainly not something that should be encouraged”.

Mr Russell added: “I absolutely recognise that the bond they have to their animals now goes way beyond the shape of their ears. So this is about preventing future harm to other animals.”

While each will have acquired their pets in different circumstances, Love Island‘s Jack Fincham, Little Mix‘s Leigh-Anne Pinnock and her fiancé, footballer Andre Gray, footballer Marcus Rashford and boxer Nicola Adams are among the high-profile famous faces who have been pictured with their ear-cropped dogs.

There is no suggestion that any of these stars broke the law or knew the dogs were cropped or were aware of the practice when they got them, and many have other dogs or pets as well and show their love for their animals on social media.

Animal welfare experts say they would like more owners with big platforms to speak out about how the look is unnatural.

Sky News has contacted representatives for all of these stars for comment.

A spokesperson for Adams said the boxer bought her dog when she was living in the US and its ears had already been cropped. He added: “Nicola would never have chosen to put her dog through any unnecessary procedure.”

Fincham released a video and a statement on Instagram in March, saying: “I do not condone, whatsoever, especially for aesthetic purposes, getting dogs ears cropped or their tails docked. There’s no need for it.” The reality TV star said his cane corso dog Elvis was “a rescue dog, and it wasn’t my choice”.

Gray has also previously commented in response to a message on Instagram to say that neither he nor Pinnock supported the procedure for their dog.

On Instagram, Adams last shared a photo of her dog in April, while Fincham posted a picture of all five of his dogs at the end of May. Rashford and Pinnock’s last posts of their pets on their main Instagram pages are from last year.

Ear cropping is most often carried out on guarding breeds such as mastiffs, Dobermanns and American bullies (different to American bulldogs), and involves removing the floppy part of the ears when a dog is a puppy, often, animal experts and campaigners say, to achieve a more aggressive and intimidating appearance. 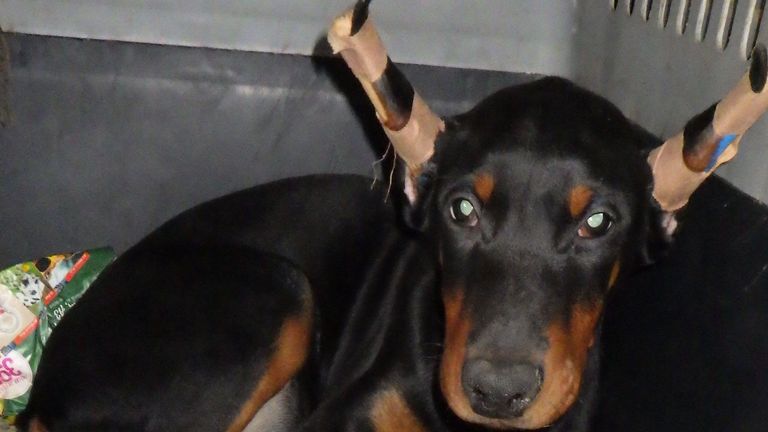 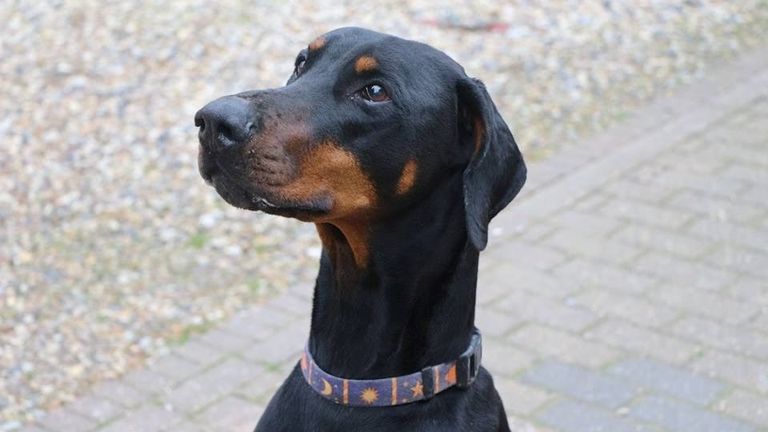 In many cases with Dobermanns, the ears are splinted to make them point upwards; a look many might be unaware is unnatural as it became commonplace. And search for a photograph of an American bully online and you’ll be hard-pressed to find one without cropped ears.

There are companies in the UK selling imported animals as security dogs, often to high-profile clients, and they are believed to sell for tens of thousands of pounds in some cases. Sky News contacted two firms featuring photographs of both cropped and uncropped dogs on their websites, but neither responded with a comment.

“People want to achieve a certain kind of intimidating look,” Ms Ockelford says. “While some people who advocate for ear cropping will say there are benefits, the veterinary and the scientific and the research evidence suggests that actually there is no benefit; in fact, it can have quite significant implications on their behaviour, on their health, on the way they socialise with other dogs and people. So there are lifelong implications.”

Ear cropping is illegal in England and Wales, unless it is carried out for medical reasons, under Section 5 of the Animal Welfare Act 2006, and punishment is about to get more severe. The Animal Welfare (Sentencing) Act 2021 comes into force on 29 June, meaning anyone convicted of such an offence faces being sent to prison for up to five years, or receiving an unlimited fine, or both. 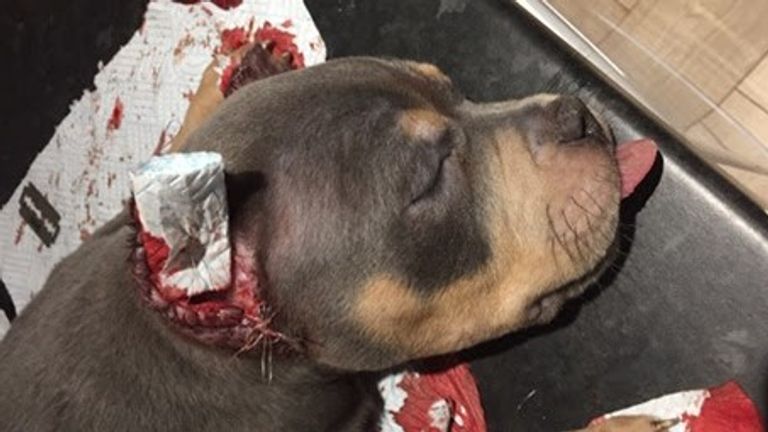 However, the practice is still legal in other parts of the world, such as the US and some European countries, and welfare experts fear the “loophole” of dogs being imported acts “as a smokescreen” for illegal cropping in the UK.

The issue has been highlighted in recent months due to a petition spearheaded by dog trainer Jordan Shelley, which has now gathered more than 100,000 signatures and is set to be debated in Parliament on Monday.

Ahead of the debate, a spokesperson for DEFRA (department of environment, food and rural affairs), told Sky News: “The practice of mutilating dogs’ ears is abhorrent and has rightly been banned in the UK for 15 years – and the launch of the Action Plan for Animal Welfare builds on our existing world-leading animal welfare standards by committing to a range of new game-changing welfare measures.

“Now we have left the EU we have the opportunity to manage our own rules applying to pet movements into Great Britain including considering the ban of imports of dogs with cropped ears.”

What can owners do?

Welfare campaigners say it would help if celebrities could do more and use their platforms to educate people.

Mr Shelley says more stars need to speak out once the issue has been pointed out to them – or stop sharing pictures of their cropped pets. A trainer who has rescued hundreds of dogs over the years, he rehomed Earl Grey, an American bully whose ears had been cropped, a few years ago. 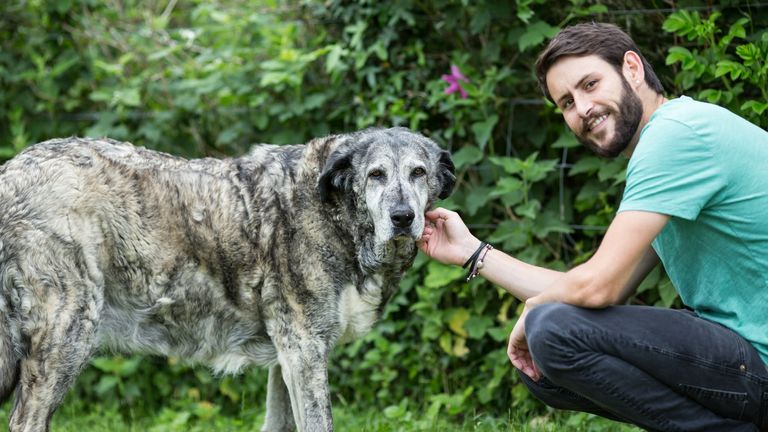 “He was gorgeous, this big 45kg thing, but he was so sweet and dopey and just the loveliest dog, but he had these ears that had just been brutalised,” he tells Sky News.

Earl Grey sadly died a few weeks ago, aged six, after being diagnosed with cancer, but Mr Shelley says he chooses to keep his photographs private because he was a cropped dog.

Once they know about the issues, celebrities “have a responsibility to either speak out about it and use it as an opportunity to educate their following or to choose not to post [pictures of] their dog”, he says. “That’s the other thing they can do, they can choose not to post images of their dog and to continue to normalise the procedure.” 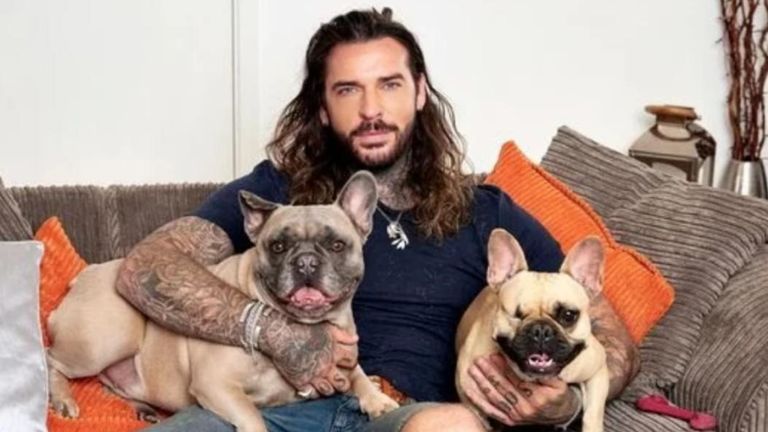 Animal rights campaigner and The Only Way Is Essex star Pete Wicks, who owns two rescue French bulldogs, Peggy and Eric, says people need to be made aware of the background.

“I know a fair few people [with dogs with cropped ears] and I’m not saying these people don’t love their dogs, but I don’t think they’ve educated themselves into what the dog’s actually been through to have ears like that.

“I’ve spoken to people that I know that have got dogs with cropped ears and said, do you know what that dog’s been through? ‘No, not really’. And then when you tell them they feel awful about it. But if you’re going to give a home to any animal or any living being, you should really do your research on it beforehand.”

Anna White, manager at the RSPCA’s Southridge Animal Centre in Hertfordshire, adopted Eton, a Neapolitan mastiff-Dogue de Bordeaux cross, about six months after he was transferred to the site in 2017 as she feared he would be too difficult to rehome elsewhere. 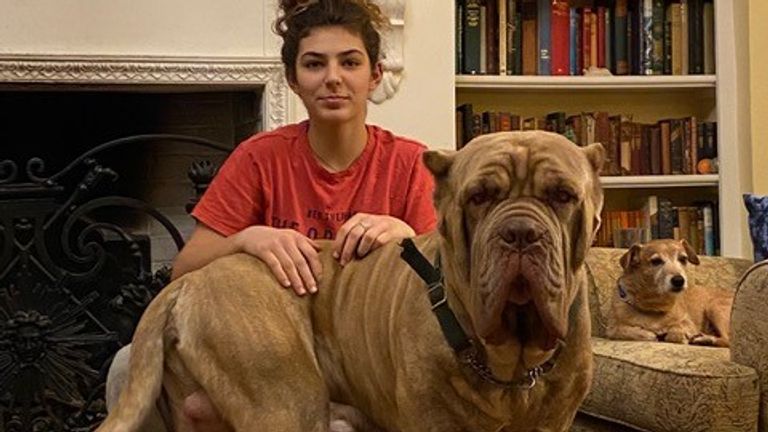 “Eton demonstrated some quite strange behavioural traits from the moment he arrived,” she said. “Unfortunately, he’s quite damaged and his rehabilitation took a long time, it’s ongoing to this day. That act that probably took about 20 seconds has had a knock-on effect on the rest of his life.”

Ms White has been the manager at the centre for 33 years and says ear-cropping is a growing concern.

“It used to be a one-off, but we see far more in here and far more walking down the street as well. Sadly now it is becoming much more common. It’s soul destroying.”

As for Zeus, he is happy with his new family – although they have faced criticism for his appearance.

“Some people have already made their mind up about Zeus before they meet him,” his owners told the RSPCA. “Thankfully, he’s none the wiser. He’s happy, friendly, playful. He’s a special guy. We love him with all our hearts.”