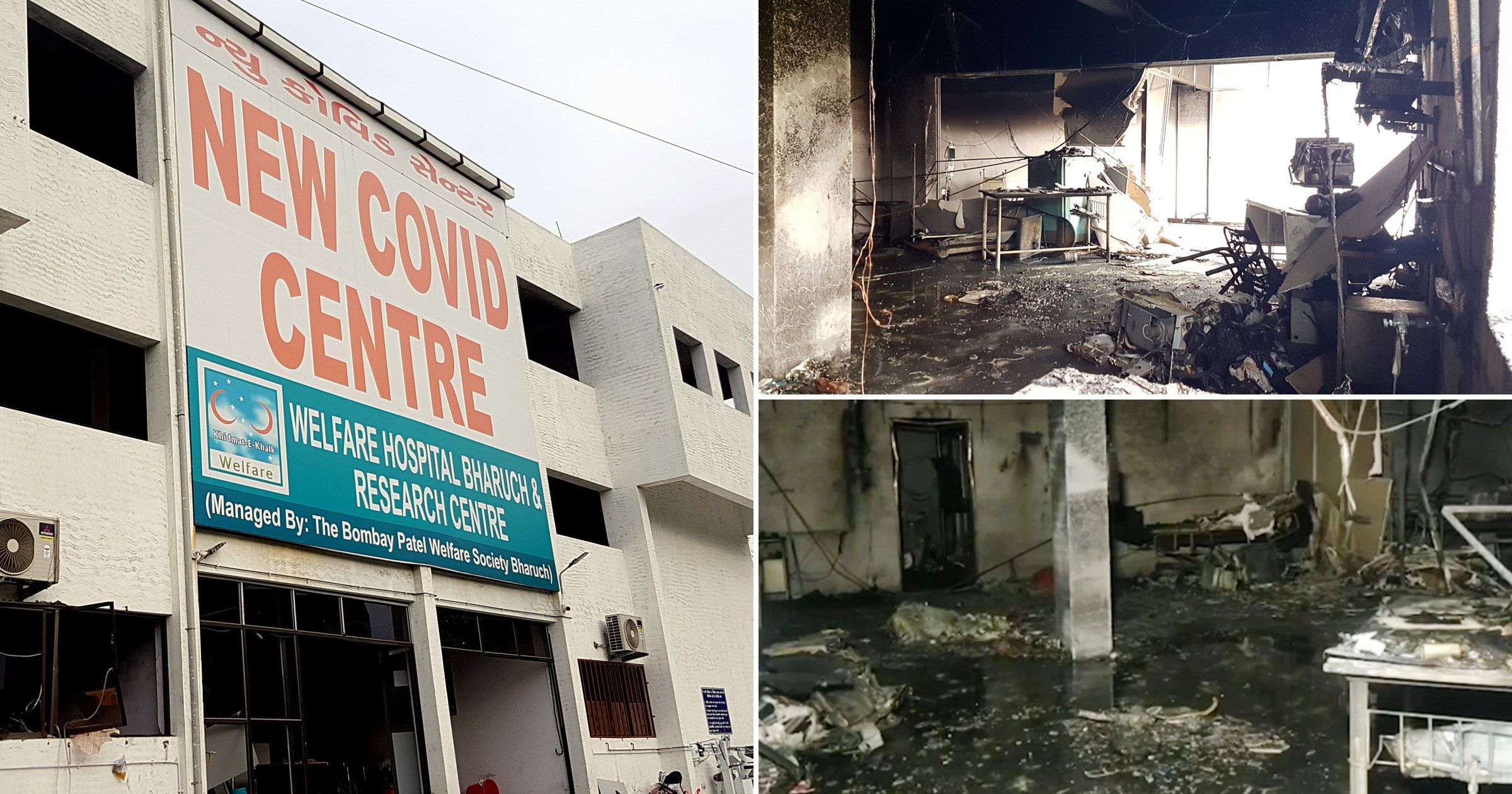 At least 18 people died after a fire broke out at an intensive care until in India for the second time in less than two weeks.

The country is grappling with unprecedented devastation as its second wave cripples the healthcare system, forcing hospitals to leave sick people to die on the street.

The blaze started around midnight on the bottom floor of the Patel Welfare Hospital, a specialist Covid facility in Bharuch city.

‘Sixteen patients and two staff members have died in the fire. Twelve of them died due to fire and smoke,’ said R.V. Chudasama, a superintendent of police in Bharuch.

‘Preliminary investigation shows the fire was caused because of a short circuit.’

Firefighters and hospital workers were able to rescue the remaining 31 patients.

Parth Gandhi, whose two sick relatives escaped the disaster, said: ‘There was a lot of chaos because of the scale of the fire … hospital staff rushed my family members out from the ward and we used our car to take them to another hospital.’

The fire was extinguished within an hour and the cause of the blaze is still being investigated.

Although local police said it may have been started by a short circuit, a state government official, Dushyant Patel, believes a leaking oxygen cylinder caused the blaze.

Prime Minister Narendra Modi said in a tweet he was ‘pained by the loss of lives’.

Just nine days ago, 13 people died when a coronavirus intensive care unit caught fire at a hospital just outside Mumbai.

The country’s coronavirus death toll now stands at 221,853 – the second highest in the world.

Both of these already high figures are thought to be higher than reported.

The news has been plagued with heartbreaking stories, pictures and videos of people suffering in India.

There are photos of a desperate woman giving her husband CPR and sprinkling him with water in a bid to save his life.

He died a few metres away from the fourth hospital that had turned them away.

India has received some medical equipment, such as oxygen cylinders, from the international community including the UK and US.

At a recent Downing Street press conference, Health Secretary Matt Hancock said: ‘We’ve all seen the harrowing pictures of what’s happening in India and I think it pains each one of us who’s seeing those scenes.

‘Not least because the bonds between our countries are so strong, and they’re ties of family and of friendship.

‘I’ve been in constant contact with my Indian counterpart and we’ve worked over the weekend to put together our first package of support of ventilators and oxygen concentrators. More supplies will be arriving later this week.

‘Everyone across this whole UK stands side-by-side with the people of India in these troubled times because in this battle against coronavirus, we’re all on the same side.

‘This fight is a global fight and when other nations face their hour of need, as we’ve faced our hour of need here at home, we’ll be there.’