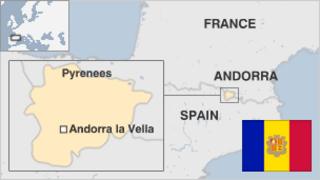 The tiny principality of Andorra is located in the high mountains of the Pyrenees between France and Spain.

The mainstay of the highly-prosperous economy is tourism, accounting for about 80% of GDP. An estimated 10 million people visit each year, drawn by winter sports, a warm summer climate and duty-free goods.

For more than 700 years Andorra was ruled jointly by the leader of France and the Spanish Bishop of Urgell.

The first Andorran Constitution was passed in 1993, establishing parliamentary government. It then joined the United Nations and Council of Europe.

The co-princes remain Andorra’s heads of state, but the roles are honorary.

Andorra is not a member of the EU, but enjoys a special relationship with it and uses the euro.

The Principality of Andorra

Co-heads of state: The bishop of Urgell, Spain, and president of France

Antoni Marti took over as head of government after his Democrats for Andorra coalition heavily defeated the incumbent Social Democratic Party (PS) in an early parliamentary election in May 2011.

Mr Marti campaigned on a platform of opposing the introduction of an income tax proposed by Mr Cassany, but in June 2013 he bowed to European Union pressure and announced that Andorra would bring in personal income tax after all.

His predecessor, Jaume Bartumeu Cassany, had called the snap election when the opposition blocked the government’s budget in parliament for the second year running.

The Andorran media scene is partly shaped by the proximity to France and Spain.

Andorrans have access to broadcasts from both countries, and for many years Andorra was home to Sud Radio, a powerful station broadcasting to southwest France.

Some key dates in the history of Andorra:

AD 803 – Emperor Charlemagne recovers area of present-day Andorra from Moors and is said to grant charter to its residents. After Charlemagne’s death Andorra is granted to Spain’s Count of Urgell by Charles II, grandson of Charlemagne.

1133 – Count of Urgell cedes Andorra to bishop of Urgell.

1278 – Under terms of “pareage” agreement, Andorra adopts joint allegiance to a French and a Spanish prince after disputes between French heirs to the Urgel countship and the Spanish bishops of Urgell.

1419 – Elected body, Council of the Land, is established to deal with local issues.

1936-39 – French troops sent to protect Andorra from spillover from the Spanish Civil War.

1982 – First executive branch of government – “Govern” in Catalan – takes office. Its head is elected by Council of the Land.