With Kim’s Visit, China Shows U.S. It Has Leverage on Trade

SHANGHAI — China’s leader, Xi Jinping, has offered carrots to President Trump to stop a trade war that has contributed to a sharp slowdown in the Chinese economy. On Tuesday, he also seemed to brandish a stick.

Kim Jong-un, North Korea’s leader, arrived by train in Beijing on Tuesday to meet with Mr. Xi just as talks with midlevel trade negotiators from the United States were winding down. Though the government said the events were unconnected, Mr. Kim’s surprise visit was an unmistakable reminder that China could complicate the Trump administration’s pursuit of other goals — including ridding the North of nuclear weapons — if the two powers fail to strike a deal on trade.

The trade talks were set to wrap up on Tuesday. The two sides are laboring to finish a deal before March 1, when higher American tariffs will kick in and escalate the trade war.

Mr. Kim’s arrival was the clearest sign yet that China is looking for ways to prod the United States to settle the dispute quickly. China’s economy has slowed significantly. Both business and consumer confidence have fallen. Car sales have plunged. Weak smartphone purchases contributed to Apple’s warning last week that its sales figures would be lower than expected because of results from China, Hong Kong and Taiwan.

The trade war isn’t the only reason for China’s slowdown, but it is making the slump worse.

“The trade war, in addition to its direct costs, has created huge uncertainties for exporters and importers, producers, consumers, entrepreneurs and investors,” Fred Hu, the founder of a large private equity firm in Hong Kong, said at a UBS conference in Shanghai on Monday.

The trade hawks have been pushing China to add more specifics to what they have characterized as nebulous promises to improve intellectual property protection, to limit government subsidies and to stop putting pressure on American companies to transfer valuable technology to China.

With Chinese and United States officials meeting to discuss how to end their trade war, North Korea’s recalcitrance could provide China with badly needed leverage. Mr. Trump’s key strategy on North Korea — using sanctions to apply “maximum pressure” to the isolated country — relies on Chinese cooperation, as more than 90 percent of North Korea’s external trade passes through China, and has at times been financed by China as well.

“Kim is eager to remind the Trump administration that he does have diplomatic and economic options besides what Washington and Seoul can offer,” said Harry J. Kazianis, an expert on North Korea and the director of defense studies at the Washington-based Center for the National Interest, referring to the United States and South Korea.

Mr. Kazianis noted that Mr. Kim’s trip to Beijing followed a New Year’s Day speech in which he threatened to find a “new way” of defending his country’s interests if Washington persists with sanctions.

“That should make America quite concerned,” Mr. Kazianis said, “as China could easily turn Trump’s ‘maximum pressure’ strategy into nothing more than a memory, as almost all North Korea’s external trade flows through China in some capacity.”

The strategy isn’t a surefire one. In the past, Chinese officials have refused to link trade disputes with national security issues. While doing so could give them a bargaining chip, it also runs the risk of provoking the White House’s national security hawks and making Mr. Trump take an even harder line. Secretary of State Mike Pompeo said on Monday that Chinese officials had made clear that North Korea and trade are separate issues. 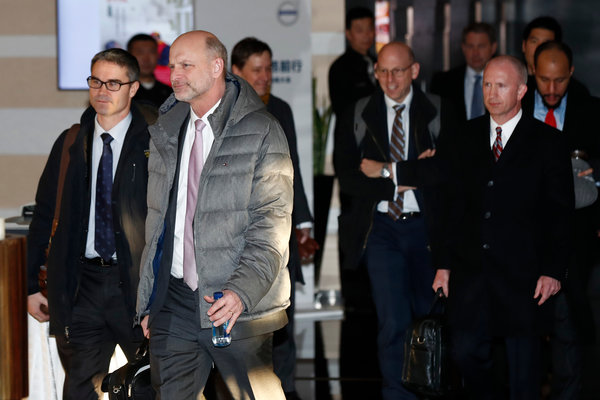 By contrast, the Kim strategy could also be ineffective because Mr. Trump has essentially declared victory in North Korea and has said he is in no rush to achieve the goal of denuclearization.

At a daily news briefing on Tuesday, Lu Kang, a spokesman for China’s Foreign Ministry, said the talks were unrelated. “China has many diplomatic events, and our diplomatic schedule is very full,” Mr. Lu said. “If there are some overlaps, it is also natural.”

The broad outlines of a potential trade deal have been visible ever since Mr. Trump and Mr. Xi met in Buenos Aires on Dec. 1. In that compromise, the United States agreed not to impose further tariff increases, but to keep the tariffs that Mr. Trump imposed last summer in a series of categories deemed important to American national security or economic security. Those ranged from nuclear reactor components to cars to various gears and pumps needed by many industries.

China has since made other offers, such as stronger protections for intellectual property and foreign companies’ trade secrets. It could also further cut its tariffs on global imports, say experts. Still, it could be difficult to get the United States to come to a full agreement.

While Mr. Trump is now expected to attend the World Economic Forum this month in Davos, Switzerland, his administration has resisted Chinese efforts to schedule any formal trade negotiations then. The administration has also sought to delay an expected visit by Vice Premier Liu He, China’s economic czar and an important figure in the talks, to Washington for further trade negotiations until after Mr. Trump delivers his State of the Union address on Jan. 29.

The problem for Beijing is that such a delay would mean that any progress from Mr. Liu’s visit would come too late to fortify consumer confidence before China’s Lunar New Year holiday, which begins on Feb. 4. The weeks before the holiday typically see a binge of consumer spending; they are often among the biggest weeks of the year for car sales, for example.

So for China, Mr. Kim’s visit gives it a chance to show that it still has something the United States wants.

Mr. Kim officially remains committed to working toward the “complete denuclearization of the Korean Peninsula,” a promise he first made when he met with Mr. Trump in Singapore in June. But his government insists that the denuclearization must also include the removal of all American nuclear threats from the peninsula and its vicinity, including Washington’s nuclear-capable strategic weapons and its joint military exercises with South Korea.

Mr. Kim also insists that his country has done enough to win Washington’s initial trust by freezing its nuclear and missile tests and returning the remains of American war dead. He is now refusing to take more crucial steps toward denuclearization until the United States reciprocates by easing sanctions.

China says it remains committed to enforcing a series of sanctions the United Nations Security Council has adopted with its endorsement. But in recent months, China has begun calling for easing the sanctions as an incentive for the North to move faster toward denuclearization. In November, a United States congressional commission warned that China appeared to have already relaxed sanctions enforcement.

Since Mr. Kim’s New Year’s Day speech, analysts have wondered about what he meant when he threatened to “find a new way” if Washington refuses to ease sanctions. Some saw it as a veiled threat to resume the nuclear and long-range missile tests North Korea has suspended since late 2017.

But others said North Korea was trying to play a balancing game between China and the United States, capitalizing on the trade war.

Writing for 38 North, a website specializing in North Korea, Rüdiger Frank, an expert on the country at the University of Vienna, said Mr. Kim’s message to Mr. Trump came down to this: “You are not our only option for security and economic development. If you refuse to be cooperative, we will ignore you and turn to China.”