When Robots Ring the Bell

When Robo Global’s team recently gathered at the New York Stock Exchange to celebrate the fifth anniversary of its robotics index and exchange-traded fund, it marked the event in true robotic fashion: A robot, propped on a table, reached out its arm and rang the closing bell as 15 company executives applauded wildly next to it.

This clever, eye-catching gesture was aimed to show the world how easy — and increasingly common — it is for humans to work alongside robots.

“It was symbolic,” said Travis Briggs, chief executive of Robo Global’s operations in the United States. “We’re in the first inning of this transition to automation and artificial intelligence, and there is a massive amount of growth potential.”

Indeed, robotics and automation are no longer viewed as a passing fad or a cool technology for geeks to gush over. Instead, more companies are turning to artificial intelligence to boost productivity and stay relevant in a fiercely competitive market. Experts call it the fourth industrial revolution and compare today’s robotics in the workplace to the early days of the internet.

At a recent conference hosted by Robo Global, experts showed photos and videos of robotic prototypes of all shapes and sizes: Robots that climb stairs and around corners to find an object and A.I.-laced pills that can retrieve foreign objects from a person’s stomach. They even included a video of a woman, with electrodes attached to her head, using thoughts to tell a robot where to place an object.

“We’re starting to see robots and automated systems penetrate every sector of the economy,” said Jeremie Capron, director of research at Robo Global. “The pace of change is really accelerating, so, yes, it’s a revolution.”

Robo Global, which researches, advises and invests in robotics, automation and A.I. companies, knows all about the sector’s growth. Since setting up its Robo Global Robotics & Automation Index ETF (Robo), which tracks more than 80 companies, the corporation reports that its assets have soared to $3.46 billion from $43 million its first year.

The phenomenon strikes both admiration and fear into a nervous American work force: A video by Boston Dynamics, showing human-looking robots running and jumping over blocks, drew more than five million views on YouTube in one week this fall. Yet many Americans, who grew up watching science fiction and “Terminator” movies in which robots were the enemy, worry about robots stealing their jobs.

“‘Terminator’ and those kinds of images have a significant impact on the way people perceive technology,” said Raffaello D’Andrea, professor of dynamic systems and control at ETH Zurich University, and a co-founder of Kiva Systems, a robotics company that was sold to Amazon.

A recent report, “The Future of Jobs 2018,” by the World Economic Forum, forecasts that machines will perform more than half of all current workplace tasks by 2025, up from 29 percent today. It also predicts that 75 million jobs will be displaced by 2022, but that 133 million jobs will be created. Of the new jobs, 54 percent will require new skills.

A McKinsey Global Institute report is gloomier, predicting that by 2030, as many as 800 million people worldwide may have been displaced by automation and will need to find new jobs.

The retail giant Amazon was one of the earliest to embrace this technology, with its $775 million acquisition of Kiva — now called Amazon Robotics — in 2012. Amazon had been under pressure to deliver orders to its Amazon Prime customers within the promised 48-hour window without losing money, Mr. Capron said. Amazon immediately deployed 3,000 robots into its fulfillment centers.

The robots wander up and down the aisles, bringing shelves of items directly to associates to package and ship, significantly slashing costs and shortening the time to process and deliver an order. Today, Amazon has more than 100,000 robots navigating 26 fulfillment centers around the world. 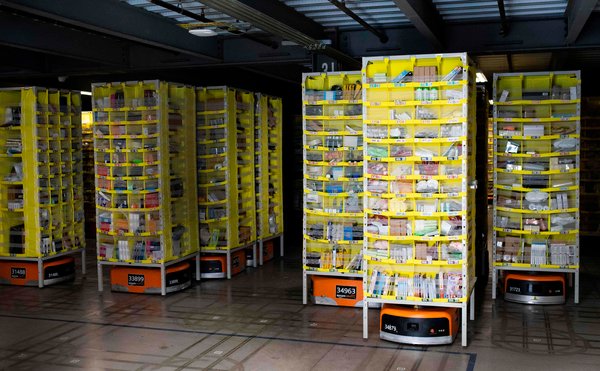 “Amazon delivered more than five billion items under two business days in 2017 to their Prime program members, based on our research, including discussions with Amazon Robotics,” Mr. Capron said. All of this bolstered customer loyalty and demand, resulting in more orders, sales revenue and jobs.

Mr. Brady said it was a myth that automation always destroys jobs.

As robots have become faster, smaller, cheaper and safer in recent years, more and more companies — large and small — have been seeking robotics to step up productivity, increase precision or cut costs, said Stuart Shepherd, regional sales director for Universal Robots USA and chairman of the Association for Advancing Automation.

All Axls Machining, a business in Dallas, was struggling to find enough workers to operate its metal-fabrication equipment and to sand and inspect metal parts manually for the medical, aerospace, defense and industrial sectors.

Without workers to run the machines and the assembly lines, production lagged. “After 5 p.m., we’d have a skeleton shift, with only half the machines running,” said Gary Kuzmin, the company’s owner. “It was costing me orders that I couldn’t get to my customers on time.”

But then Mr. Kuzmin discovered Universal Robots, which makes collaborative robots, or cobots, which are small, affordable and designed to operate safely side by side with workers. They are easy to program to do multiple tasks and allow the company to crank out parts around the clock.

After introducing the robots, one job that was expected to take six months to complete was finished in less than half that time, Mr. Kuzmin said. “We saw a 60 percent profit increase on that job alone.”

The company became so adept at programming the robots for different jobs that it formed an All Axls Robotics unit, which sells its specially programmed robots to other machine shops.

Mr. Kuzmin said the increased productivity allowed him to hire — rather than fire — more workers, boosting his work force to 22 from 16.

Early in 2017, another company, Zippertubing, of Chandler, Ariz., was having a tough time finding extra workers to help fulfill a big automotive order for its cable management products.

“We had a lot of people who would come in, work for maybe a week, and then leave because they didn’t like the repetitive work environment,” said Tim Mead, operations manager at Zippertubing. It brought in Universal Robots’ cobots and immediately saw productivity surge.

“It used to take three people to do all of the operations that the robot now does,” Mr. Mead said

The robots have also increased the company’s accuracy in spotting faulty manufactured parts. When operators look at thousands of parts a day, they sometimes become “snow-blind” to defects, Mr. Mead said. But that never happens to robots.

All of this has stoked fears, especially among Americans, that robots, automation and A.I. will throw millions of people onto the unemployment line.

Some industry experts play down these concerns, saying that in any industrial revolution, jobs are lost and new ones created.

“Fifty years ago, or even 15 years ago, who knew what an app developer was, or the amount of programming that we’d need,” Mr. Briggs said.

Over the next decade, the biggest job losses will most likely affect low-skilled workers performing repetitive tasks, like machine operators, assembly line workers, dishwashers, drivers and preparers of fast food. Certain white-collar areas, like data entry, accounting and payroll, will suffer as well.

Demand, however, will probably surge for data analysts, software developers, web designers, IT experts, e-commerce specialists, health care providers, entrepreneurs and social media experts, according to the World Economic Forum report. Sectors that involve human skills, like sales, marketing, customer service and even art and entertainment, will also be in high demand, the report said.

While new jobs will offset losses, retraining and education will be critical. As many as 375 million workers globally will need to change job categories and learn new skills to survive the transition, according to the McKinsey Global Institute report.

“The days are gone where somebody learns to do a task, and that’s what they do for the rest of their life,” Mr. D’Andrea said.

How quickly and how deeply A.I. and robotics penetrate the job market will ultimately dictate how rapidly people need to be retrained.

“History tells me that every prior technological revolution has resulted in more wealth and more jobs,” Mr. Capron said. “So it would have to be very different this time around for history not to repeat itself.”

But A.I. has its critics. The visionary billionaire Elon Musk has described it as humanity’s “biggest existential threat,” while the renowned physicist Stephen Hawking, who died this year, predicted that “the development of full artificial intelligence could spell the end of the human race.” Mr. Musk is particularly concerned about the use of A.I. to develop autonomous lethal weapons that could select targets without human intervention — a development with potentially apocalyptic repercussions.

Mr. Raffaella said A.I. was a long way off from being a real threat. He does believe, however, that regulations will be needed to safeguard its use in autonomous weapons.

Mr. Briggs was less concerned. “I think Elon Musk is being overly dramatic,” he said, noting that he did not believe that A.I. should be regulated. “I think regulation is a slippery slope — it certainly stifles creativity.”