Think Saving for Old Age Can’t Be Fun? Try Making It a Game

When Gabi Stack imagines herself at 75, she pictures a life that ideally includes a move to Germany, lots of travel and ample time for lingering at cafes with friends.

So she was startled last week when she received a digitally “aged” photo of herself that didn’t match her self-image of an active, independent person. “I truly hope I don’t look like the picture,” she said, noting extra wrinkles creasing her forehead and a “fatter” face. “I’ll find out in 20 years if I look like that.”

The image was created at an employee benefits fair on Maui, in Hawaii, using an app called AgingBooth. The idea is to get employees to think more concretely about their future, older selves — and motivate them to make financial plans.

Mrs. Stack, now a 55-year-old mental health care coordinator for the State of Hawaii, volunteered as a lark with Prudential Financial, her retirement plan administrator.

Despite the shock of the photo, Mrs. Stack still thought taking it was fun. And that reaction is precisely what many employers and retirement plan sponsors are aiming for, with new tactics to entice workers into planning for retirement — a task almost universally acknowledged as unpleasant. Employers are luring their workers with new techniques like applying computer programs to artificially age photos and using games and quizzes to engage them on retirement and financial topics.

Brian Moto, chairman of the board for the State of Hawaii Deferred Compensation Plan, which helped organize the benefits fair, said AgingBooth could be off-putting, but useful even for those who watched from a distance. “Some of them cautiously say, as I did, ‘Oh, no, thank you, I really don’t want to see myself,’” Mr. Moto said. “For a lot of people aging is something serious — it’s not always easy either to accept or deal with, but at least we got them to think and pause.”

Some employers are reporting greater success at reaching their workers using games and quizzes rather than more traditional brochures and spreadsheets. With this in mind, the retirement plan provider and investment firm TIAA created a competition for its clients, Square Up Your Savings and Financial IQ, held at more than 7,000 plan participant offices around the country. 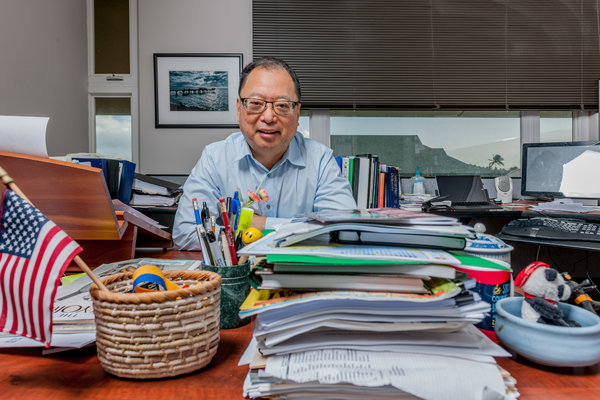 For one game in particular, men and millennial players appeared especially motivated by competition, with men logging 40 percent and millennials 50 percent more clicks on their rankings than other demographic groups, according to TIAA. Millennial employees, too, showed greater interest in the games than older workers did — in one instance, employees 24 to 34 years old represented the highest number of repeat users, logging eight quizzes per player, the company said.

Stephanie Maksymiw is one of those avid players. Among the first to take TIAA’s quiz, she understood the difference between stocks and bonds and was confident her knowledge about investing would help her ace the financial questions in the online competition held at her workplace, SRC Inc. But to her surprise, when she took the quiz for the first time, the results revealed big gaps in her understanding, like the definitions of bear and bull markets. Determined to improve her score, Ms. Maksymiw played every day for three weeks, ultimately getting an “above average” ranking compared with her colleagues.

“It was competitive,” recalled Ms. Maksymiw, 37, a quality systems analyst SRC, a military research nonprofit based in Syracuse, about how she and her co-workers tracked their rankings on their retirement plan sponsor TIAA’s public scoreboard.

SRC is just one of thousands of companies turning to online games to engage employees about money and retirement topics. Prudential created the Procrastinator Quiz to help people better identify why they delay making important decisions about their investments and retirement. The firm Voya Financial, formerly ING, presents its retirement planning quizzes, tools and information on a virtual game board that a “player” advances along. Mr. Moto described another visualization exercise in which attendees of benefits fairs are asked to mark the age of the oldest person they know on a large vertical panel to emphasize the importance of planning for long lives.

The stakes of these efforts are high. A report published in May by the Board of Governors of the Federal Reserve system showed that under two-fifths of non-retired American adults described their retirement savings as on track, and one-quarter had no retirement savings or pension at all.

Preparing for retirement can be a confusing and overwhelming task, and three-fifths of non-retirees reported “little or no comfort in managing their investments” in self-directed retirement savings accounts, according to the Fed report, in which 12,246 people were surveyed. On average, those surveyed answered fewer than three of five basic financial literacy questions correctly.

While there is some question about the efficacy of education alone to improve financial decision-making, investment firms behind the efforts say games can bring more people into a conversation about retirement planning, making it less stressful and dull.

David Ray, a TIAA senior managing director, said the games’ competitive aspect helped draw people in. “It’s just human nature” to compare yourself with others, he said. “The fact that we maintain a leader board stokes those competitive fires even more — you can move along the scale from a more novice rating to an expert rating — everyone wants to be an expert.”

Despite the apparent interest in games among both investors and investment firms, some research has cast doubt on long-term improvements in financial literacy. One study — conducted by Shawn Cole at Harvard Business School, Anna Paulson at the Federal Reserve Bank of Chicago and Gauri Kartini Shastry at Wellesley College — examined the results of mandatory financial literacy courses in schools and found “no effect” on savings and investment behavior.

“What worries me is people have this intuition that it’s all about information,” according to Dan Ariely, the James B. Duke Professor of Psychology and Behavioral Economics at Duke University. “Information alone is very unlikely to help,” he said.

Other organizations, such as the nonprofit Commonwealth based in Boston, are aiming to bridge the gap between thinking and doing. With support from the Treasury Department, Commonwealth tested an app aimed at helping lower-income high school students, called Ramp It Up, in which players complete college and career-readiness projects like creating a financial aid account, or searching for scholarships, in order to advance in the game.

Ms. Maksymiw, for one, said the games helped her decide to double her contribution to her company’s retirement plan, and she now reads her quarterly statements. After yielding much of the responsibility for managing her savings and investments to her father — “he’s been doing that since before I was born,” she said — she now says her goal is to take over more of the decisions for her own money outside her retirement plan.

But when it comes to retirement planning, some persistent negative perceptions of aging may be one of the biggest obstacles, said Tamara Sims, a research scientist with Stanford’s Center on Longevity. Her latest research, conducted with Jeanne Tsai, a professor in Stanford’s psychology department, demonstrates that people who focus more on what they lose than what they gain show a greater reluctance to think and plan for their later years. Her survey included the questions: “What do you look forward to about being 75 and older?” and “What do you dread?” Those with more negative perceptions tended to focus on physical and cognitive limitations while those who looked forward to aging emphasized more lifestyle benefits, like social connections, family, enjoying nature or leisure, she said.

“Your future self is an abstract concept,” Dr. Sims said. Even a simple writing exercise focusing on the ways you would like to take care of an older you can help people perceive their future more clearly. This could help spur planning for retirement, shifting a discussion away from the downsides of aging to, “This isn’t a scary, frightening thing but this is something I look forward to,” she said.

It was this idea of an exciting new chapter that motivated Mrs. Stack to move up her target retirement age a few years ago, to 58 from 62, and prompted her to take a hard look at her expenses and income in retirement.

“Of course you can always have more money, but how much do you really need?” she asked. “And what is more important, to enjoy your life or to amass these large amounts of savings but you have nothing to show for it?”