Sewing That Ends Up in Orbit

Hue Nguyen, 64, is a seamstress at Leidos in Webster, Tex.

How did you learn sewing?

When I was growing up in South Vietnam, my mom’s friend had a clothing alterations business, and I loved watching her sew. One day I asked for some leftover cloth to make clothes for my doll. She taught me how to sew buttons on her customers’ clothing and gave me a little money to buy candy. 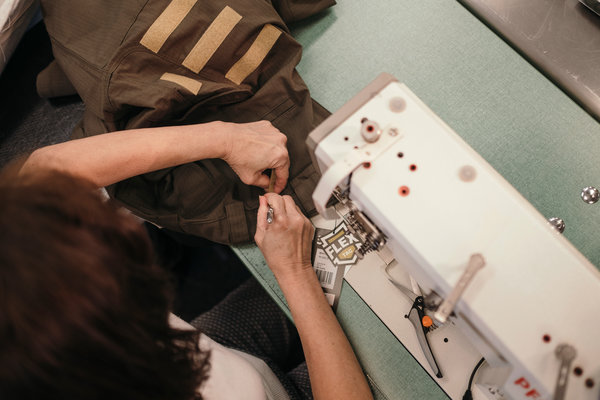 Eventually, to save my parents money, I started making clothes for my siblings. In high school I tutored young children and studied sewing instead of following an academic path. I graduated with a certificate in sewing and taught first and second grade in a private school afterward.

How did your career develop?

In 1975, an uncle in the South Vietnamese Army helped my family escape by boat. We traveled to the Philippines, and then to a refugee camp in the United States, finally settling in San Antonio. I got a job sewing at a men’s clothing store and then did alterations for various bridal shops.

After having children, I started a home business sewing bridal gowns, bridesmaid dresses and other items. When they were older, I began sewing for several space industry companies, and in 2011, I started as a sewing technician at Leidos, a science, engineering and I.T. services company.

What types of items do you sew?

Leidos has several contracts with NASA at the Johnson Space Center in Houston, including some related to cargo logistics and astronaut performance. I modify some of the astronauts’ clothing by removing buttons and snaps that can break off in space, float away and damage equipment, and I add Velcro on pocket flaps to keep items from escaping. I also design and modify cargo bags, blankets and so forth.

Do you also fit the astronauts?

I do. Their spacesuits always seem to need altering when they come from the manufacturer, so I travel to the space center for that. At first I was star-struck, but I see them fairly often and I’m not intimidated anymore. I just want to do a good job.

In 2014, an astronaut gave me a Silver Snoopy award, their personal achievement award. I was so nervous in front of people that I don’t even remember his name.

Do you sew by hand?

I sew Velcro on small pockets by hand, but mostly I sew by machine. I use two heavy-duty, commercial ones; another with a five-foot arm for large items; one for lightweight material; and a serger, which sews a seam and finishes it in one process and also removes the extra material.

What has been particularly challenging to work on?

A thermal cover for the astronauts’ digital cameras. It needed nine layers of insulation to meet spaceflight requirements and protect the camera from the extreme temperatures, which change from minus-250 degrees to 250 degrees Fahrenheit when the camera moves between shade and direct sunlight in space.

The astronauts need to be able to operate buttons on the camera and replace the battery, photo card and lens in their bulky spacesuits and gloves, so I cut openings in the cover, added flaps and used Velcro for closing them. I made a pattern and then a mock-up.

Following that I made a prototype, incorporated a few minor adjustments from the client and then made the final product. I sewed two covers for training and four for spaceflight, and when they changed the camera, I had to redesign the cover and make more.