In Japan, It’s a Riveting TV Plot: Can a Worker Go Home on Time?

TOKYO — Last month, as Americans tuned in to the final episode of “Game of Thrones,” Japan was indulging in its own television fantasy world.

In this one, a woman dares to leave work at 6 p.m. sharp.

The determination of Yui Higashiyama, a 30-something project manager who wants nothing more than to get out of the office and into her favorite bar for happy hour, rocks the fictional web design firm where she works.

A conniving supervisor and overachieving co-workers try to foil her plans. When her team faces a seemingly impossible deadline in Episode 9, she puts aside her steely commitment to work-life balance, dramatically declaring, “I will work overtime!”

Ms. Higashiyama is the protagonist of “I Will Not Work Overtime, Period!” — a modest television hit in Japan that has struck a chord in a country with a dangerously intense, at times deadly, national work ethic.

It has prompted workers to talk about their own difficulties in finding work-life balance, even as Japan’s major corporations and government officials have increasingly encouraged them to ease off.

The show’s creators say they know the problem well.

“I was extremely conscious that taking a break meant slacking off,” said Kaeruko Akeno, a writer whose novel inspired the program and has the same name. “It took such a long time for me to accept the fact that it’s O.K. to not work on weekends or on weekday nights.”

Similar stories are depressingly common. Japanese workers put in some of the world’s longest hours. In 2017, over a quarter of the country’s full-time employees worked an average of more than 49 hours a week, according to a government report, effectively working six out of seven days.

In some extreme cases, that dedication to the workplace can lead to death. In 2017, government data showed, overwork claimed 190 lives — in the form of exhaustion, heart attacks, cerebral hemorrhages — a figure that has stayed more or less constant over the last decade.

In addition to cultural attitudes about the value of hard work, she said, some employers reduce costs by relying on overtime, and employees work the longer hours for the extra pay and to please the boss — promotions often depend more on time spent at a desk than actual productivity.

The Japanese government has taken measures to reduce long hours and change cultural norms around work.

In April, just in time for the debut of the TV show, a new law came into effect limiting overtime to no more than 45 hours a month and 360 hours per year, barring special circumstances. And Japan’s Ministry of Economy, Trade and Industry has promoted a program it calls Premium Fridays, asking employers to let employees leave a few hours early on the last Friday of every month.

On the show, the enlightened chief executive at Ms. Higashiyama’s company encourages workers to leave the office on time. What holds her co-workers back are employees and supervisors who simply cannot stop themselves — a feeling familiar to fans of the show.

“Ultimately, the system always depends on someone pushing themselves to the limit,” one fan wrote on Twitter. “The problem is the Japanese system of work, where excess is the norm.”

The idea that work requires personal sacrifice is deeply rooted in Japanese culture and has exacerbated many of the country’s other social issues. 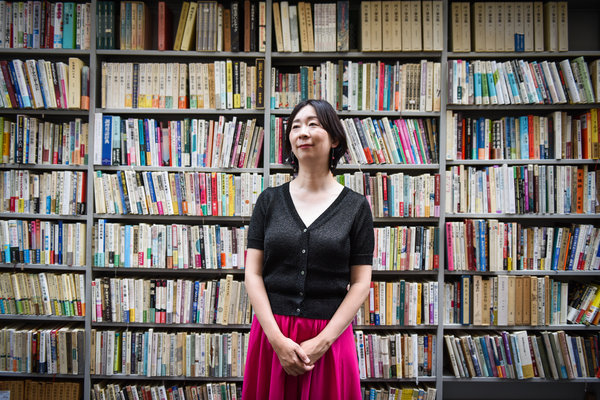 The fact that the main character on the show is a woman lends further drama in a country where women — particularly mothers — face discrimination in the workplace. Women who want to succeed in corporate Japan often feel even more pressure to prove themselves, while also balancing family demands, a dilemma faced by one of the show’s characters.

“Just by saying, ‘I’m not going to work overtime,’ the show’s heroine” is committing a radical act, Tomohiro Machiyama, a prominent film critic, wrote on Twitter. Referring to Ms. Higashiyama, he said, “She’s clearly showing a strategy for solving the problems currently facing Japan, from low wages to the low birthrate.”

In the novel, the decision to work overtime leads to her downfall: She becomes addicted to work, ends up in the hospital and loses a new beau, who has a decidedly more relaxed attitude toward his own job. But on the TV show, Ms. Higashiyama is destined for a happier fate, said the producers, who declined to share more specific spoilers.

Viewers will have to wait to find out what befalls her. After an earthquake struck the northwest of Japan’s main island Tuesday night (no major damage was reported), an emergency broadcast interrupted the finale. Fans quickly took to Twitter to joke that the cast had gotten off work early.

Ms. Akeno, who goes by a pen name to protect her family’s privacy, based the novel on her own experiences of office life in Japan. For her first job, she worked at what she described as a “black company,” a Japanese expression for workplaces that exploit their employees.

When Ms. Akeno graduated from college in the early 2000s, Japan was in a deep slowdown, and work was hard to find. Many people her age ended up bouncing between temp jobs or dropping out of the work force entirely.

People who came of age at the time “have insecurities about employment,” she said. “We fear that if we aren’t useful to companies, we will be discarded.”

The situation has changed. An aging labor force and a recent streak of slow but relatively steady economic growth have made workers more valuable. “I Will Not Work Overtime, Period!” explores the changes in how millennials and their Japanese elders think about work.

Even though the government and younger workers are pushing for shorter workdays, older employees who were raised on the idea that work trumps all just can’t seem to get comfortable with the idea of working a 40-hour week.

Ms. Akeno said that culture permeated other parts of Japanese life. When she left her job to become a writer, she found herself working virtually nonstop. When she had her second child, she was writing right up to the point when she was taken into the delivery room.

The only time she stopped was when she was taking care of her baby, she said. Eventually, she said, her body shut down, and it took her two years to fully recover.

“What is considered honorable isn’t how much you achieve, but how you manage to never take a rest,” she said.

The show’s producers have their own work stories. Kasumi Yao, who first pitched the show to the Japanese network TBS, hasn’t taken a vacation in 12 years, she said. Ms. Yao thought up the idea for the drama after she came across Ms. Akeno’s novel at a bookstore and fell in love with its title, which strikes a defiant, attention-grabbing tone in Japanese.

When TBS announced the show’s title, some online commentators were appalled.

“They were like, ‘Isn’t going home on time normal?’” said Junko Arai, the show’s second producer. “‘If something so obvious is the basis for a drama, Japan’s in serious trouble.’”

As for Ms. Akeno, she is still working hard.

Like her novel’s heroine, she never intended to be at the center of a battle over office hours. She just wanted to work a little less and enjoy her life a little more. But thanks to the book’s success, she’s finding it difficult to step away.

“I talk about my experience only because I feel that I have to,” she said.

Still, she added, “I wish someone else would do it for me.”